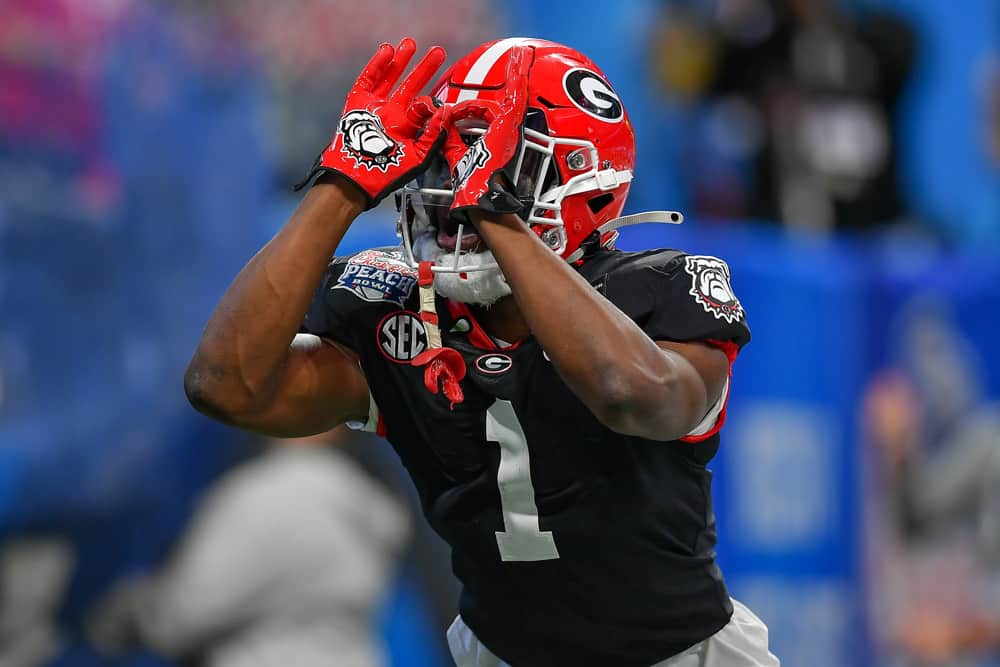 The wide receiver position has become one of the most important in fantasy football. I am here to give you an advantage. Below I have compiled a list of the top 20 wide receivers to keep your eye on this season in college football. If you’re playing devy fantasy football these may be players you want to try and acquire before they break out. As a dynasty owner getting to know these names before their draft year can give you an advantage come draft day. Let’s dig right into this!

Coming out of Hoover, Alabama Pickens was a five-star recruit according to 247 sports composite rankings. He was the fourth rank wide receiver in the 2019 recruiting class. In 2018 he produced 1387 yards and 15 touchdowns while playing at Hoover high school. He was overwhelmingly strong and physical at 6-5, 199 pounds, using this to his advantage in routes and after the catch.

As a freshman, Pickens showed his star power right away, as his 14.8 yards per reception were good enough for a top 10 finish in the SEC. He would finish the year with 727 yards on 49 receptions, in 12 games. His eight receiving touchdowns were sixth in the SEC. He would go on to win the most valuable player in the Sugar Bowl that year. In a shorten Covid season this year, Pickens continued to shine as he produced 513 yards on 36 receptions. He added six touchdowns as well, it is clear he is ready to take over the lead role in 2021.

As the 2021 season approaches, all signs point up for Pickens. Transfer JT Daniels will be under center for a second season so the rapport will be there. Pickens will be a focal point in this offense and this will allow him to show off his good hands and playmaking abilities. This season should bring huge rewards to devy managers while opening the eyes of dynasty managers everywhere!

Bell was a four-star recruit coming out of Warren Central high school, where he produced over 4000 yards and over 50 touchdowns. 247 Sports had him ranked as the 17th wide receiver in the 2019 recruiting class. His 6-0, 200-pound frame mixed with his toughness and basketball background make him a problem for defenders.

Once at Purdue it was very clear that Bell was a special athlete. Just a smooth well-rounded receiver who does all the little things and never takes plays off. He produced the third-most yards in the Big-10 as a freshman with 1035.  He did this while leading the Big-10 in receptions at 86. This all led to him winning Big-10 freshman of the year. As a sophomore this year he produced 625 yards on 53 receptions in only six games. While leading the Big-10 in touchdowns with eight. It is very clear Bell has become the focal point for the Boilermakers.

2021 should be a huge year for Bell,  a season that looks to not be affected by Covid we should see him for a full 12 games. With Rondale Moore leaving for the NFL even more opportunities will open up for Bell. All of this combined with his great speed and natural ability is a combination for huge success. If you own him in any devy leagues be ready he should reward you this season. For the dynasty mangers reading this start acquiring those mid-first-round picks because Bell is a special player. He will be one you want to own!

Boutte is a Louisiana kid through and through, born in New Iberia and attending Westgate High School. Standing at 6-0, 185 pounds he was a versatile weapon at the high school level,  as he rushed for over 1200 yards and produced over 1600 yards through the air. He had a combined 39 total touchdowns as well. 247 Sports had him ranked as a five-star recruit and the second-best wide receiver in the 2020 class.

Staying true to his Louisiana roots Boutte committed to LSU, as a freshman this past season he was forced into a lead role. Fellow wide receiver Ja’marr Chase would opt out of the 2020 season and then partway through the season Terrace Marshall would do the same. He shined with this opportunity as he produced 735 yards, good enough for eighth in the SEC and five touchdowns. Most impressively was that he finished with a 16.3 yards per catch average. This was made possible by his great ability to create after the catch.

Boutte will have the luxury of getting another full off-season of development in, as well as some time to add some weight. Once this happens I expect huge things out of him in this LSU offense. For the next two years, he will be the focal point of this offense and with all of his talent, the sky is the limit. If you can acquire him in devy leagues cheaply at the moment do so now, as he will give you two huge years of production. Dynasty managers need to keep a close eye on him as well as he has a good chance to be the top receiver come 2023. He will continue to climb in devy and dynasty wide receiver rankings.

Coming out of Lake Travis High School Garret Wilson was highly sought after. While there he produced over 3500 yards and 57 touchdowns. 247 Sports had him as a five-star recruit and the second-best wide receiver of the 2019 class. At 5-11, 175 pounds he is not the prototypical alpha size, but he plays bigger than his size. He would generate 33 offers from schools all over the country, he settled on Ohio State.

As a freshman in 2019, Wilson would not produce crazy numbers. However, he would shine in limited playing time. His 432 yards and five touchdowns were fourth on the team. This past season he became a more focal point of the offense, his skill level began to shine through. His 723 yards were third in the Big-10 and second on the team. He would also finish top five in the Big-10 in both touchdowns(6) and yards per reception(16.8).

This season was looking to be the breakout year for him as most expected fellow wide receiver Chris Olave to declare for the draft, this did not happen. Now with this two-headed monster of Olave and Wilson, the Buckeyes will have a great core. However, this is going to create an issue for devy managers, as his production may not be what we expected. His skill level is better than Olave’s, so the hope is that he will become the focal point. As a dynasty owner we should keep an eye on him as a rising star in this 2022 class, he could easily be in the discussion for the best wide receiver come this time next year.

Metchie coming out of The Peddie School was a 6-0, 195-pound versatile weapon. He produced over 1300 yards rushing, mostly in his earlier years. As well as over 2500 yards receiving and 42 total touchdowns. 247 sports had him as a four-star recruit and the 42nd overall wide receiver in the 2019 class. He would bring in 22 offers and ultimately decide on Alabama.

As a freshman Metchie did not see the field much, mainly due to the depth at the position for Alabama. This season after several departures to the NFL a window opened for Metchie. He finished fourth in the SEC with 916 yards. For his first year as a staple in the offense, this was very impressive. His great speed and fluidity shined as some of his better traits. He would add six touchdowns as well and average more than 16 yards per reception.

2021 looks to be a year for a prime breakout for Metchie, two more receivers are leaving for the draft this year. Metchie should be the focal point of the always high-powered Alabama offense. This sound be music to any devy players ears, we all saw what Smith did this past season in that role. If Metchie is even half of what Smith was you will have a great devy asset. Dynasty managers keep your eyes on him as well, he could stay under the radar in the 2022 class if he declares.

Here is the full list of the top 2o wide receivers for this season at the moment. Come this fall, whether you play devy or dynasty these are wide receiver rankings and players you will want to keep an eye on.