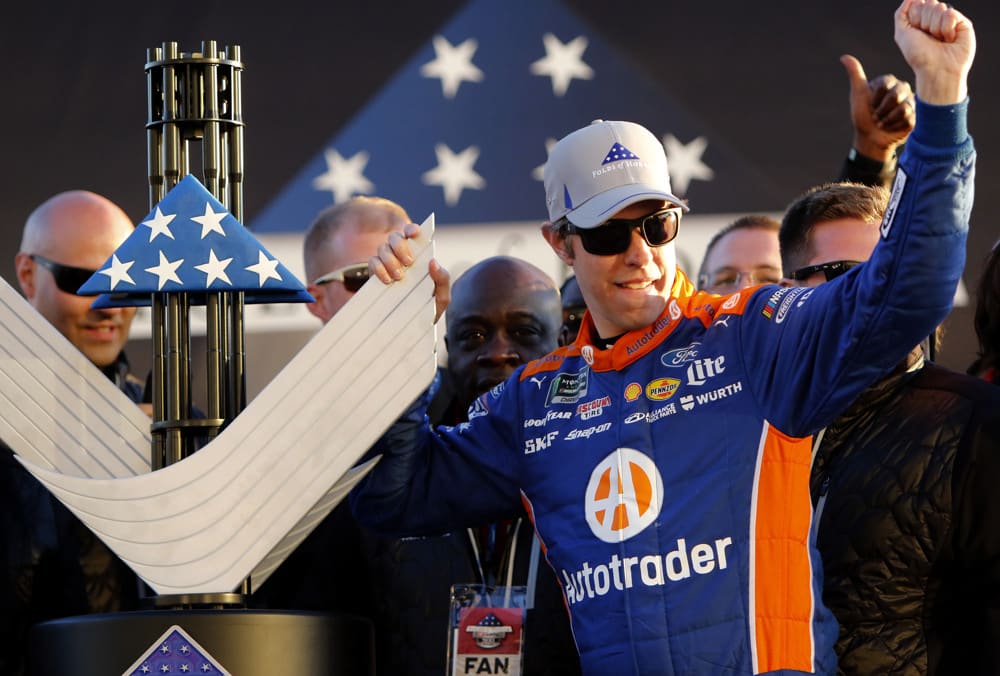 This week, the hauler trailers move back east to the Atlanta Motor Speedway to set up the NASCAR Folds Of Honor Quiktrip 500 DraftKings Picks. Each week, NASCAR does a great job saluting the Soldiers, Sailors, Airmen, and Marines that make up our Armed Forces. This race in particular puts them in the spotlight. It also holds a special personal meaning.

For 17 years, I have donned the uniform as a member of the United States Army. I’ve served around the country and the globe alongside some amazing human beings. I consider myself lucky to have seen firsthand the many reasons why organizations continually make efforts to honor their service. I’ve also gained the first-hand experience with the tri-fold flag proudly displayed on the race logo.

Over the last five years, I have personally folded more than 1,000 of them in the solemn tradition every service member earns upon their passing. Many of them I also served as the bugler responsible for sounding the sullen refrain of Taps. It’s an honor I don’t normally discuss, but given the nature of this race, I feel is relevant to the conversation. So, take in another amazing Sunday of NASCAR racing. Before you do, pause a second to remember those who served and are no longer with us to enjoy it with us. It’s the least we can do to honor their memory.

Brad Keselowski has enjoyed a fantastic start to the 2021 season. There have been five races so far this year; three of them he’s posted a top-5 finish. Also, he’s led 93 total laps and has had the fastest lap 79 times. His worst finish this season was his 16th place finish at Homestead.

This week, he heads to a track where he’s collected two career wins in the last four runnings of this race. His time there also consists of four top-5 finishes and eight top-10s. All told, he’s led 135 laps there. He will be rolling off the starting grid from the fourth position and carries with him the potential to lead laps early. Obviously, place differential points will not be plentiful, but you are hoping for the win and many, many laps led along the way to help you hit value here.

Denny Hamlin has been on quite the tear to open up his year. With four top-5 finishes in the first five races, he’s continued to be one of the fastest cars on the track week after week. Over the last two weeks, he’s led a total of 80 laps while accounting for 51 of the fastest laps. In his lone finish outside of fifth, he took the checkered in the 11th position at Homestead.

The last person not named, Harvick, Keselowski, or Johnson was Kasey Kane in the 2014 season. Two years before that Hamlin etched his name on the trophy. This week he starts from the pole and as dialed in as the FedEx team has been this season, he has a great shot at staying there for a while. Quite possibly to the end making him a solid NASCAR Folds Of Honor Quiktrip 500 DraftKings play.

If You Must Fade:

How, you ask, can a driver with only one Xfinity Cup race to his name be priced higher than drivers several years his senior? The answer comes by way of Austin Cindric‘s starting position and his likeliness to end much farther up the line when the checkered flag drops. He’s already shown he can turn a bad start into a solid finish once this season.

In his only Cup start of the season at the Daytona 500, he took the green from the 39th position. Over the course of that race, he maneuvered through the field and ended up finishing in 15th place. It could have been a better day were it not for his last lap wreck with teammate Joey Logano. This is something the hot young Xfinity Series driver hopes to duplicate in Atlanta this week.

A WILD final restart. Retweet to congratulate @AustinCindric on his NASCAR Xfinity win in Phoenix! pic.twitter.com/l5pafszU5H

He’s the reigning Xfinity Series champion and so far in the circuit has two wins. His lowest finish so far was sixth place in Homestead. There is much to be excited about for the Penske Pirtek #33 this Sunday. Jumping on him will be the most popular, as well as the most necessary move for your NASCAR Folds Of Honor Quiktrip 500 lineups.

For 20 years, Kurt Busch has suited up to run laps around the Atlanta Motor Speedway. Over the last 13, he’s been among the best on the track. Since 2007, he’s had 12 top-10 finishes including a pair of victories. He’s never had back-to-back seasons finishing outside of the top ten. His worst finish in the last five seasons is 8th place. He’s led the field for 803 laps in his 29 starts. A total of 103 of these have come in the last five years.

His starting position this week means he will need to once again find his way up to the front. In 2019, he crossed the finish line in third place. A similar finish here will help pay down on his price tag. We know he’s capable of running upfront. Hopefully, by beginning the race in the fifth row, he can lead a few laps along the way to help this along. Being away from Daytona has been disappointing for Busch, but he should snap back to form on a comfortable track.

For The Bargain Shopper:

There seem to be no secrets on this slate. Due to the qualifying formula, most of the drivers that have run well this season, are up towards the front of the pack to start the race. This causes havoc in terms of pricing as those cars have a lower ceiling than they might have had with normal qualifying circumstances. Christopher Bell is an example of this as his price is low, but by starting in 8th, his potential for differential points tightens. Add to this the fact that he’s only raced this track once with an 18th place finish to show for it.

.@SIRIUSXM is back on the No. 20 Camry for 2021, and @CBellRacing is debuting this all-new paint scheme this weekend at @amsupdates. What do you think of the blue and white design? We love it! pic.twitter.com/7H7FuU4A1X

It seems though Joe Gibbs racing has found something in Bell as he has not only won a race this season since then has gone on to turn in two top-10 finishes. You should get another solid run from Bell again this week as he gets used to his surroundings. He’s pulling with him the potential for another victory and all the points that come with it for this NASCAR Folds Of Honor Quiktrip 500 pick.

Fool me once, shame on you. Fool me twice, shame on me. Here we are though, lined up again at Kevin Harvick’s table hoping for a dominant performance. I chose not to fully feature him because two weeks in a row we were hoping for that Harvick magic, and two weeks in a row, he burned us. The long and the short of it is this, he owns two of the last three checkered flags in Atlanta and has finished outside of the top-10 only once in ten years. Oh yeah, in that span he’s led 1,212 laps to boot. If there was ever a week to roster him, it’s this one. Just proceed with caution. We still have open wounds.

Kyle Busch is costly yet again this week. The thing is, at some point this season, much like Harvick, things are going to click for Busch. Also like Harvick, that could very well be in Atlanta. Seven of the last ten times he’s run here, he’s turned in a top-10 performance. One of them ended in a victory lap. He’s starting from the middle of the pack, so you are in line for a few differential points should he climb his way to the front. The trick will be to stay there.