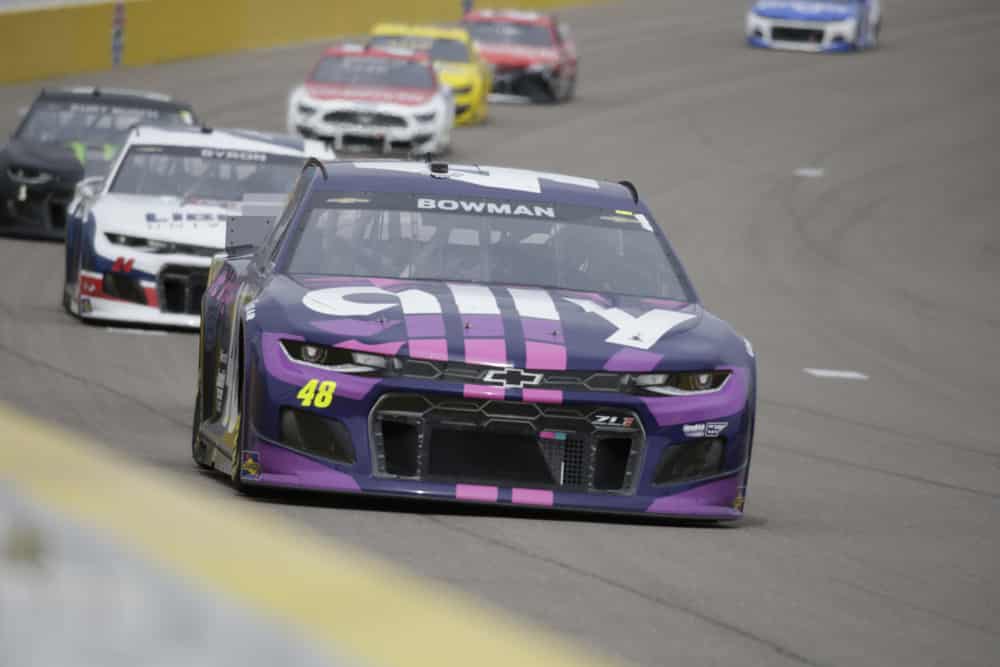 This week, NASCAR remains in the desert, but moves to Arizona and the Phoenix Raceway for another edition of my NASCAR Instacart 500 DraftKings picks. Drivers will contend with the low-banked tri-oval for 312 laps. Stage breaks will come after laps 75 and 190 with the third stage closing at the end of the race. Phoenix will celebrate the 50th Cup Series race on their track this week. It will be the fifth event of the 2021 season.

Once again, the starting grid was determined by the algorithm and there were no practices afforded to drivers. There may be wild fluctuations in the field early on in the race, but once things settle in, you will see some familiar names rolling in some familiar places. It’s an important strategy to identify a mix of drivers with winning potential as well as those with the ability to gain several positions from where they qualify.

In racing, as is the case with any other sport, there are just off days. Last week Kevin Harvick was supposed to be one of the drivers to beat in Las Vegas. He had historically dominated the track and was starting from the front. Unfortunately, he ran out of luck last Sunday. In the process, he snapped a four-race top-10 finish streak at the Las Vegas Motor Speedway. Also gone was his three-race top-10 streak to start the 2021 season. Lucky for us, and for Harvick, the Cup series moves to Phoenix this week. It’s a chance for a redemption week on a track he’s more than comfortable racing.

Everyone has their happy place. That one place in all the world that you know you are safe and only good things will happen. Harvick gets to visit that happy place this week when his Jimmy John’s Stewart-Haas Racing Ford Mustang hits the Phoenix Raceway. His nine wins on this track represent the most by any driver in the 49 race history in Arizona. In 36 total starts in Phoenix, he owns 18 top-5 finishes and has crossed the finish line tenth or better 25 times. On top of that, his 940 laps led on the Raceway are the most of any other driver. The accolades go on and on, but the point is, Harvick is flat-out good in the Arizona desert.

Kevin Harvick vs. Carl Edwards at @PhoenixRaceway in 2016. What a finish. pic.twitter.com/LyrIKCcAmz

This week, NASCAR has given us the gift of an 18th place starting position for Harvick. This means the potential for a decent amount of differential points from the #4 car. Should he cross the finish line first this weekend, you’ll benefit from at least 17 of them. The quick math gives you a 62 point base with a Harvick win. This doesn’t factor in any laps led, or fastest laps posted. He’s a safe play cash game despite his expensive price tag.

If Harvick is too expensive for you, or you are looking for a lower-cost tournament pivot, Kyle Busch is the answer. Many will gravitate to Brad Keselowski to fill that role, due to his success so far this season. This pick is not chasing weekly success, rather, it’s taking into account Busch’s track success over the course of his career. Much like Harvick, Busch seems to thrive amongst the cactus and the bright desert sun.

Since August of 2005, he’s taken the green flag at Phoenix 31 times. Of those, he’s registered a top-10 finish in 22 of them. On 12 occasions, he finished inside the top 5 drivers. Three of those times, he was the first to cross the finish line including back-to-back wins to close out the 2018 season and start the 2019 campaign. Last season he finished in 11th place, snapping his five-race streak of top-3 finishes. Also worth noting are his 11 wins, 17 top-5, and 20 top-10 finishes on this track in the Xfinity series.

Retweet to congratulate Kyle Busch on his WEEKEND SWEEP in Phoenix! pic.twitter.com/yJSQjT5xd5

He’ll have some work to do this week as he finds himself in his worst starting position in Phoenix since the 2016 season. That November, he started from the 19th spot on the grid. What’s encouraging here, is he turned that start into a second-place finish by the end of the day. The downside of this play will be his lack of room to benefit from differential points even if he does turn in a top-5 finish. That said he’s as safe a bet as any to collect solid finishing points. Use him only in tournament lineups as a move away from what is sure to be a heavy usage of Harvick in your NASCAR Instacart 500 DraftKings lineups.

If You Must Fade

Value is tight his week. Many of the mid-priced drivers on the slate offer very little potential in the way of differential points. So at this price range this week, you are looking for drivers that will not lose you points. You should get exactly this out of Alex Bowman and hopefully a little more if he continues to trend in the right direction. He’s now driving Jimmie Johnson’s famed #48 Hendricks Chevrolet. He’ll look to carry on the winning tradition set by his predecessor who enjoyed 4 wins, 16 top-5, and 22 top-10 finishes in Phoenix.

Bowman excelled in the #88 over the back half of the 2020 circuit. Over his last 12 races, he produced 9 top-10 finishes. He saw a streak of four such finishes snapped in Arizona to close out the season when took the checkered flag from the 16th position. This season has started with some ups and downs he’ll have to overcome if he wants to return to that form. He started from the pole in Daytona, only to get collected in the big one on the 13th lap. He bounced back on the road course the next week to turn a 36th place start into a top-10 finish. The next week, he finished 9th in Homestead. Last week in Las Vegas, an unscheduled green-flag spot took him out of the top-10 and plunged him to a 27th place finish.

You’ll need some hard-driving for Bowman to pay off this week from his 21st starting position. Among similarly priced drivers though, he’s the one with the greatest room for extra place points, both in terms of differential, and finishing. He’s worth exposure in tournament lineups and a few multi-entry cash game rosters as well.

For The Bargain Shopper

This year’s Daytona 500 winner has enjoyed the 2021 season so far. After winning the season opener, he finished 8th on the road course, then turned in a solid 6th place run at Homestead. He doesn’t come into Phoenix with much in the way of past success on this track. What he does have is momentum. He has already almost equaled his four total top-10 finishes last season and wasn’t all that far off from matching it last week.

Not quite the day that we had hoped for, but still a decent run.

Thank you to @LovesTravelStop for coming on board! Looking forward to having them back on the car next weekend at @phoenixraceway as well. pic.twitter.com/yHRY61mg3K

He’ll start in the middle of the pack this week which will get you some manner of differential points. Should he crack the top-5 you’ll be in a better position. At his price though, a finish of 10th or better will hit value five times over. That’s not taking into account any potential laps led, or fastest laps posted. All in all, he’s about as valuable as value gets on this slate. His salary relief will allow you to heavy stack on the more expensive drivers on this NASCAR Instacart 500 DraftKings slate.

Joey Logano has been sniffing around the front every race this season. He has two top-10 finishes as well as a 12th place finish in the Daytona 500. In 24 career Cup Series starts in Phoenix he has logged 2 wins, 6 top-5, and 13 top-10 finishes. He is the defending champion of the Spring race here. His high price will make it difficult to benefit from him unless he leads several laps and wins.

Not much is slowing Kyle Larson down as of late. He’ll ride into Phoenix fresh off a win in Las Vegas. He’ll also enjoy a front-row start on a track he’s run historically well. In 13 starts, he’s finished 10th or better in seven of them. If you roster him you are hoping for him to pick up his first Cup win in Arizona.