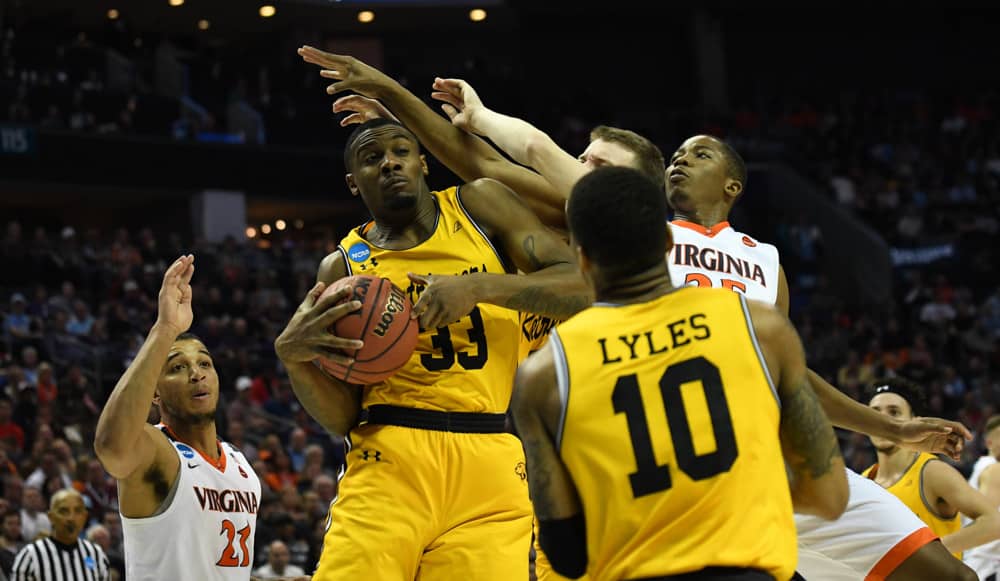 I was a young boy when I realized that college basketball had the greatest postseason out there. It was not like the NBA, MLB, or NHL where you played a series of games. It was not the NFL where you only saw the top six teams make the playoffs per conference. Here in college basketball, 68 teams are fighting for a chance at glory. It does not matter how much money your school makes when you step onto that hardwood. Here, anyone can lose to anybody on any given night. Nothing like it.

For the majority of the NCAA tournament’s life, you could pencil in the one seed for a victory against the 16 seed every time. Set it and forget it. Until the University of Maryland at Baltimore County shocked the world becoming the first 16 seed to knock off a one seed when they rolled over Virginia in the 2018 NCAA tournament. The 16 seeds are closing in on the one seeds with a now 1-135.

Now I am not taking anything from the 16s here. However, I cannot in good faith promise you any of these teams can put it together to knock off one of the top four teams in the country. So instead, allow me to give you an alternative theory. In a world of COVID-19, there are now replacement teams that are on standby waiting for a team that has to forfeit last minute.

So, if one of those one seeds were replaced with a Louisville then I would significantly like that 16 seed’s chances to topple the new one seed. Outside of that, another one seed upset would truly be MADNESS.

Think you know will win it all? Go here for the latest NCAAB Championship Odds.

The magic number here is eight. Eight 15 seeds have shocked the two seed in the NCAA tournament. Slightly better odds as they have an 8-132 record versus their opponent.

2016 was the last time a two seed saw a first-round exit when Michigan State was upset by Middle Tennessee. In 2012, we saw two 15 seed destroy brackets as Norfolk State and Leigh both picked up wins over Missouri and Duke respectively. Florida Gulf Coast is the only 15 seed that has made the Sweet Sixteen in 2013.

Luka Garza is going to have his hands full as his Iowa Hawkeyes are going to have to face the Grand Canyon Antelopes and their two seven-footers—Asbjorn Midtgaard and Alessandro Lever. The Antelopes are the Western Athletic Conference champions and are top 15 in the nation in opponent’s three-point percentage according to KenPom. Grand Canyon is a feisty team and if their big men can keep Garza at bay, then they have a good shot at the game at the end. Expect a lot of points.

Rick Pitino has found his way back into the NCAA tournament. However, this time his Iona Gaels are the Metro Atlantic Athletic Conference champions and are facing an Alabama team that many think can make the final four. Does that not make this a great spot?! I find it hard for Alabama to get up for this game fresh off capturing the SEC championship. Could the Tide fall asleep at the wheel versus an Iona team that closes on shooters and hits their shots.

The Colgate Raiders enter the tournament as the Patriot League champions to face the Arkansas Razorbacks. The Raiders have a lot of offense and they are going to need it to keep up with freshman guard Moses Moody who is averaging 17 points per game. But the Raiders have a 17 points per game scorer as well in senior guard Jordan Burns. KenPom has Colgate third in three-point percentage and first in opponent’s three-point percentage. Colgate will need to do exactly that by limiting the Razorbacks offense to be able to stay in this game.

Alright if you know me you know I’m a big fan of Shaka Smart, however, let me talk up Abilene Christian for just a second. I’m not even going to talk basketball in this spill—this is about heart. As someone with siblings, little brother is always perceived as the loser. There are people that probably do not even know Abilene Christian is in Texas. This is the opportunity for Abilene Christian to give a powerhouse school in Texas a piece of their mind.

Texas is fresh off their first Big 12 Championship and I am sure they are not concerned about the little Abilene Christian Wildcats. And they should be as KenPom has the Wildcats ranked 32nd in the nation in adjusted defensive efficiency and has them 13th in opponent’s three-point percentage. This can be a low-scoring game where little brother can shock big brother.

The 13 seeds are on a bit of a heater as they have on at least one game in seven of the last ten NCAA tournaments. That brings their record to 29-111 all-time versus the four seed. The 13 seed boasts a strong 6-2 record in games decided by one point.

Ohio is seeking to become the first school in history to have two upsets as the 13 seed as they beat Michigan in the 2012 NCAA tournament. And they have a very good chance as they are led by junior guard Jason Preston. Preston is the team’s leader in points, assists, and steals. And just to add to it, he is also second on the team in rebounds and blocks—the kid does it all for the Bobcats. They are also getting a Virginia team that had to bow out of the ACC tournament due to COVID-19. They may be looking to capitalize on the Cavaliers’ COVID situation and send them packing early.

Look, I know he is the truth and people have lost a lot of money this year betting against Cade Cunningham. But here me out with Liberty. The Flames are tremendous offensively. KenPom actually has the Flames with a better adjusted offensive efficiency rating than the Cowboys. They also hit their threes at 38.8%—tenth best in the nation. Liberty is going to have to defend if they even want a shot to win, but their offense will be able to make sure it is not a blowout. Liberty also is fresh off an upset in the 2019 tournament, but I will save that for the next seed matchup.

By far, this matchup is the most popular fan pick for an upset every year. And I mean…I do not blame them for it. The 12 seed has a ridiculous 50-90 record versus the five seed. They have upset the five seed in eight of the last ten NCAA tournaments. In 2019, we saw three five seeds go down as Wisconsin, Marquette and Mississippi State fell to Oregon, Murray State, and the aforementioned Liberty.

You have to be intrigued by all of these 12 seeds. Everyone brings something different to the table. Oregon State is coming off of their first PAC-12 title. Georgetown is coming off of a Big East title after legendary former head coach, John Thompson, died in 2020. Winthrop wants to prove that they can compete on the next level as they are coming off a 23-1 season a Big South title. Then you have Big West champions UC Santa Barbara who is probably the most talented 12 seed in terms of offensive and defensive efficiency led by senior guard Jordan McLaughlin.

And looking at the five seeds, Villanova and Tennessee are both down arguably their best players due to injury. Colorado has struggled away from home all season. And Creighton has not looked the same after the locker room incident with Greg McDermott and his players. This is March Madness. Expect the unexpected.