Week 17 is in the books and we officially have our first 14-team NFL Playoff field solidified. If you ask me, I think the Chicago Bears are the worst #7 seed in NFL history, but hey I’m just a Packer fan relaxing at home on a bye this week. Now that we are no longer speculating on who’s in and who’s out, it’s time to dig into some more of the meat and potatoes of the FFPC Playoff Challenge strategy.

Enter the FFPC Playoff Challenge For Only $200!

I would encourage everyone to go read Part 1 which posted last week, for an introduction to the contest structure, some general strategy goals, and a deep-dive on the kicker and defense positions.

Using a process of elimination to settle on good roster construction, here’s where I am currently learning:

Before we jump into the quarterback position, I want to make sure everyone is in a proper GPP mindset when we are thinking about the FFPC Playoff Challenge. I am sure that some of you reading this have only been playing season-long leagues this year, or if you have dabbled in DFS maybe it has only been cash games. Since the FFPC Playoff Challenge has an extremely top-heavy payout structure, you absolutely want to be thinking about crafting lineups that will score well when the field doesn’t. In other words, you should want to win this tournament by scoring the least amount of points possible. I have gotten into quite a few discussions with people about this concept this year, and it is clear to me that this is one of the harder pieces of game theory to grasp.

Here is a quick example of why it’s important to think this way (numbers are completely made up). Let’s say you decide to pick Aaron Rodgers at QB in the playoff challenge and he ends up coming in at 30% ownership. If Aaron Rodgers does well and is the highest-scoring quarterback in the playoffs (like you want him to be if you pick him), you will then be battling with 30% of the entries at the top of the leaderboard. This puts extra pressure on your decisions of, for example, Tyreek Hill vs Travis Kelce and Derrick Henry vs AJ Brown. Let’s say that all 4 of these players finish within 5-10 fantasy points of each other by the end of the playoffs. If you have Rodgers along with 30% of other lineups, you HAVE to be correct on the Hill vs Kelce and Henry vs Brown choices, there is no room for error. Let’s take another scenario where you decide to pick Drew Brees who comes in at 5% ownership, and he ends up doing well and is the optimal QB choice. Since you are now only battling with 5% of other entries, you may be able to get away with EITHER Hill or Kelce and Henry or Brown in your lineup since the margin for error has now increased. There isn’t as much pressure for your lineup to be exactly perfect when you are battling with fewer people at the top.

Quarterbacks: Not as Important as You May Think

When people first see this contest, I would assume the most common thought is that “you need to have a quarterback in the Super Bowl in order to do well.” I’m actually not really assuming here, because the 59% of lineups who had Lamar Jackson and Jimmy Garoppolo in 2019 and the 48% of lineups who had Patrick Mahomes and Drew Brees in 2018 do more than enough to back up that assumption for me. Here are the two charts of QB performance vs ownership from the last two playoff seasons. 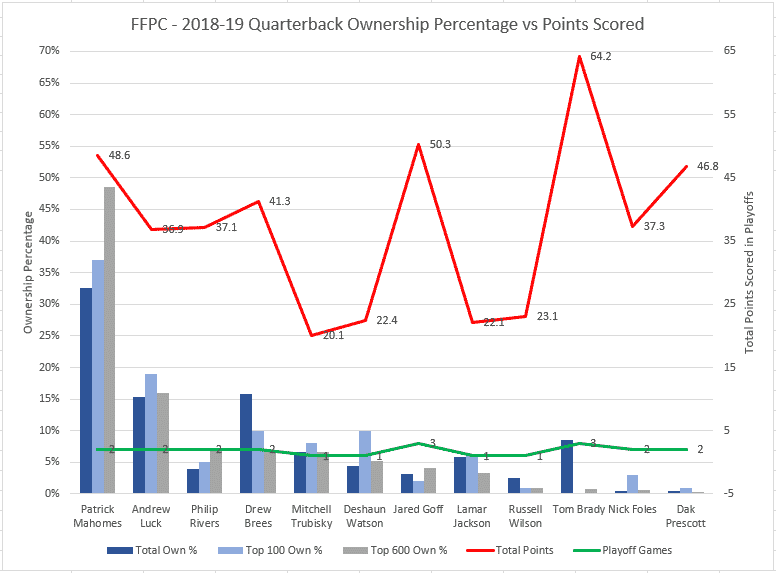 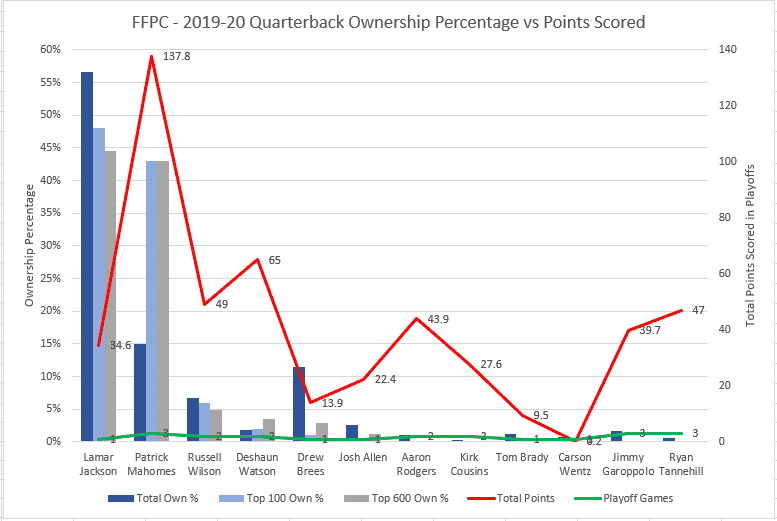 I want to go down two different angles here to dispel the QB in the Super Bowl myth. First, let’s talk about how people have historically gone about picking QB and how these popular QBs have done relative to their peers in this contest. In 2018, 60% of lineups picked a quarterback from either a #1 or #2 seed. Coincidentally, 60% of the Top 600 lineups that year included one of these four quarterbacks (although Patrick Mahomes accounted for 300 lineups himself). On the surface this seems like a good thing “60% of Top 600 lineups included a QB from a #1 or #2 seed”, however, you have to factor in the ownership. Only 14% of the lineups that chose a quarterback from the #1 or #2 seed ended up in the Top 600 lineups. Here’s a more in-depth chart of every quarterback from the last two seasons (the yellow highlighted player was the most popular in each conference). 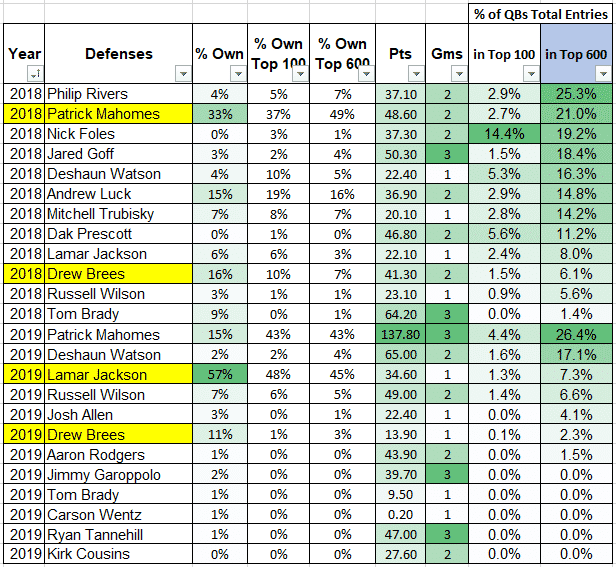 Seven of the top ten most popular quarterbacks came in under expectation when comparing the Top 600 ownership % relative to their total ownership %. Patrick Mahomes is an outlier (no kidding) and I will talk more about him later, but other than him I think it makes sense to pick a guy who may not be so popular. Before last year’s playoffs, I posted a similar breakdown trying to say that quarterbacks were not that important for the FFPC Playoff Challenge, and when I said I was fading Lamar I got laughed at by a lot of people (hopefully all of those people were in the lucky 7% of Lamar lineups who finished in Top 600). This year, I decided to dig even farther than just the past two seasons. Below are all the teams from the last six Super Bowl matchups. The blue players are the quarterbacks, the dark green players are teammates who outscored their quarterback throughout the playoffs, and the light green players are teammates who came within 10% of their quarterbacks’ total fantasy output. 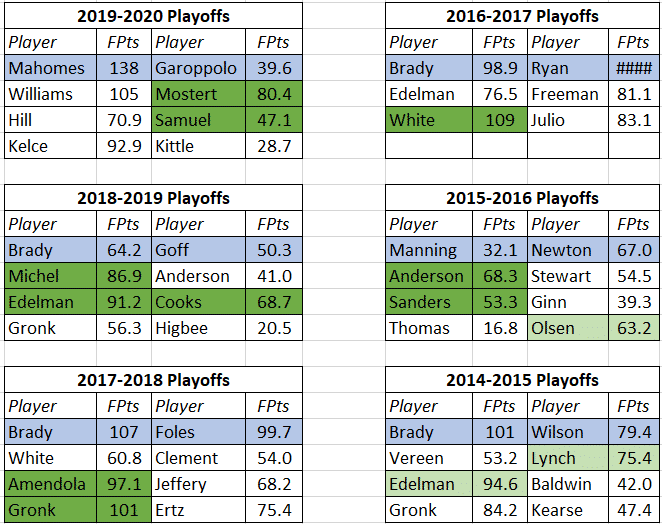 As you can see, there are a ton of players who outperformed or scored marginally the same as their quarterback over the last six seasons. As teams play more games, the odds of an outlier performance (especially with PPR scoring) by a position player other than QB start to increase greatly. Except for Patrick Mahomes, he may be the one exception to all of this. He is basically the only “popular” quarterback who has performed over expectation. When looking at lineups in the Top 600, he scored the most points at the QB position in this format over the last six years, and he completely blew away the rest of his teammates from a fantasy scoring standpoint in last year’s super bowl run.

Relative to total entries, in 2018 there were eight different quarterbacks who saw at least 10% of their total lineups cross over the min-cash mark. Last year, due to ownership condensing, there were only two quarterbacks who met this same mark. So how can we use this past data to help us this year?

I believe we will see ownership spread out this year at QB like in 2018. Patrick Mahomes and Aaron Rodgers are the MVP favorites and have led both of their teams to the #1 seed and a first-round bye. However, they both have weapons around them who are capable of exploding for some HUGE fantasy numbers. Drew Brees and Tom Brady should garner some ownership because they are both trendy picks to unseat Rodgers and the Packers in the NFC and people love going with the older more experienced guys in the playoffs. Josh Allen and Russell Wilson are both on teams who would appear to be set up well heading into the playoffs. We know that they both have four touchdown ceiling games in their arsenal. This doesn’t even include guys like Lamar Jackson, Ryan Tannehill, and Mitch Trubisky all of whom come into the playoffs running pretty hot.

As we talk through the quarterback and skill position players, we need to start thinking about two things. First, what is the maximum number of games this player could play in, and secondly, how will this player perform relative to their teammates in all the games they play in? I made the chart below to help compare these two things. 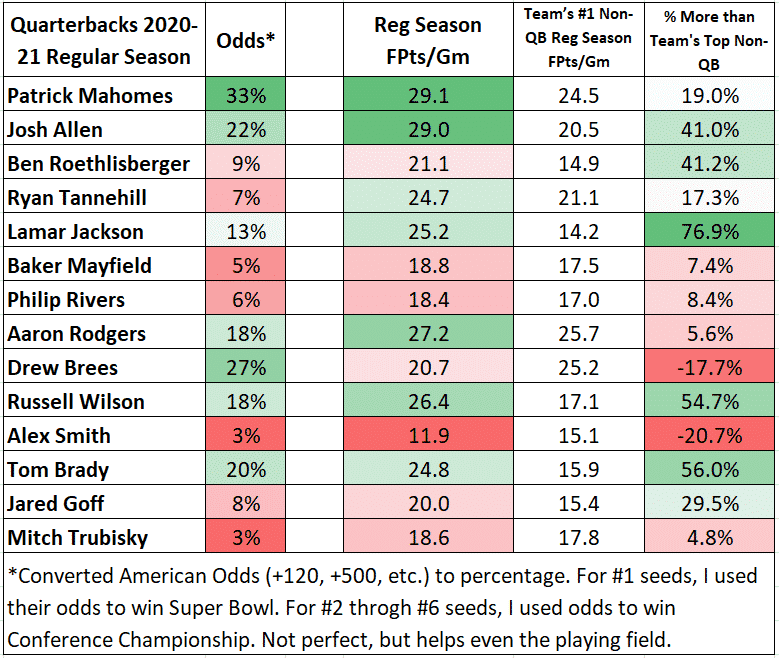 Patrick Mahomes (KC) – he is the one true unicorn quarterback and has already proven that he is capable of outscoring his teammates by a substantial amount in a three-game Super Bowl run.

Josh Allen (BUF) & Lamar Jackson (BAL) – Both have good odds to play three or more games, have outperformed their teammates by a wide margin this season, and are playing for teams who are running hot coming into the playoffs.

Tom Brady (TB) & Russell Wilson (SEA) – Slightly riskier with these guys, because I think both of them could potentially only play two games, but the weapons around them make it tough to narrow in on who else to choose from their team.

One of the most important things about being in a large tournament is making sure that you have a lineup that is unique. For the FFPC Playoff Challenge, one of the potential ways to do this is by opting for a backup player in your lineup. For the purposes of this section, a backup player will just refer to any player who is not the team’s RB1, WR1, or TE1.

Since 2018, there have been 57 different backup players selected to lineups. Of these 57 players, only seven of them (12%) have outscored their team’s starter at that position. These 57 players were used in lineups 1915 times, and the seven that outscored were only in lineups 432 times (22%). It’s important to note, that these lineup numbers do not count unique lineups (as some people may have played more than one backup at once), but I think the point is driven home pretty clear here. It does not pay to be contrarian by picking a backup player.

Flex Position: What Position do we Care about Most?

As I mentioned earlier, this year is different because we can use 4 Flex positions which can be either an RB, WR, or TE. The way that you fill in your Flex spots is going to be extremely important this season. Here is a chart showing the FFPC Playoff scoring output for the Top 30 players at each position over the last two years. 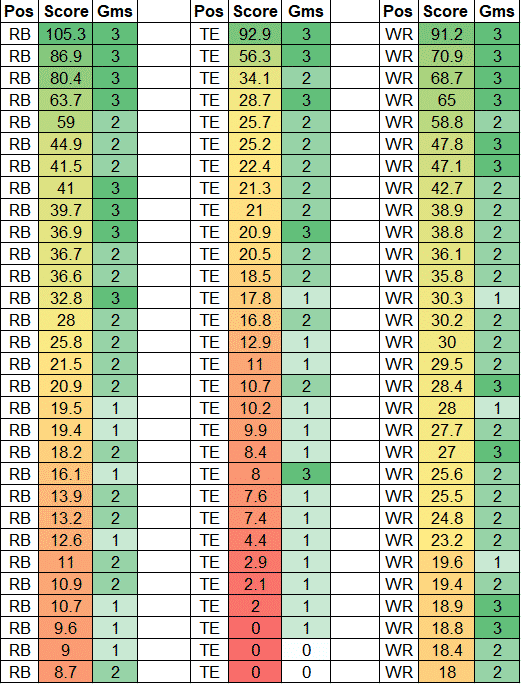 There are a couple of key takeaways from this chart. First, the RBs who play three games have a lot higher floor and ceiling than the WRs who play three games. This is especially interesting in a year like 2020 where we have a lot of strong WRs coming into the playoffs, while the RB pool seems a bit weaker. If we think we can narrow down some teams who have the ability to play three or even four games then we probably want to side with their bell-cow back rather than their WR1.

On the flip-side, the WR fantasy outputs don’t have as steep of a drop off as the RB and TE positions do. You have to go down all the way to WR42 before we find our first single-digit score whereas the RB27 and the TE19 both scored under ten points. Wide Receivers also have more one-game players who score in the double digits. Nine WRs who played only one game scored more than 10 points over the last two playoff runs, while only five RBs and 4 TEs did the same.

This chart will really help set the stage for Part 3 of the series. When deciding on teams that we think could have a long playoff run, we probably want to skew towards selecting the Running Backs vs the Wide Receivers. Then, in our Flex position, we probably want to have a 3 to 1 ratio of WRs to RBs as these will likely include more players from the teams that will only play one or two games.

That about wraps it up for Part 2 of the FFPC Playoff Challenge Strategy Series. Make sure to check in tomorrow for the conclusion.