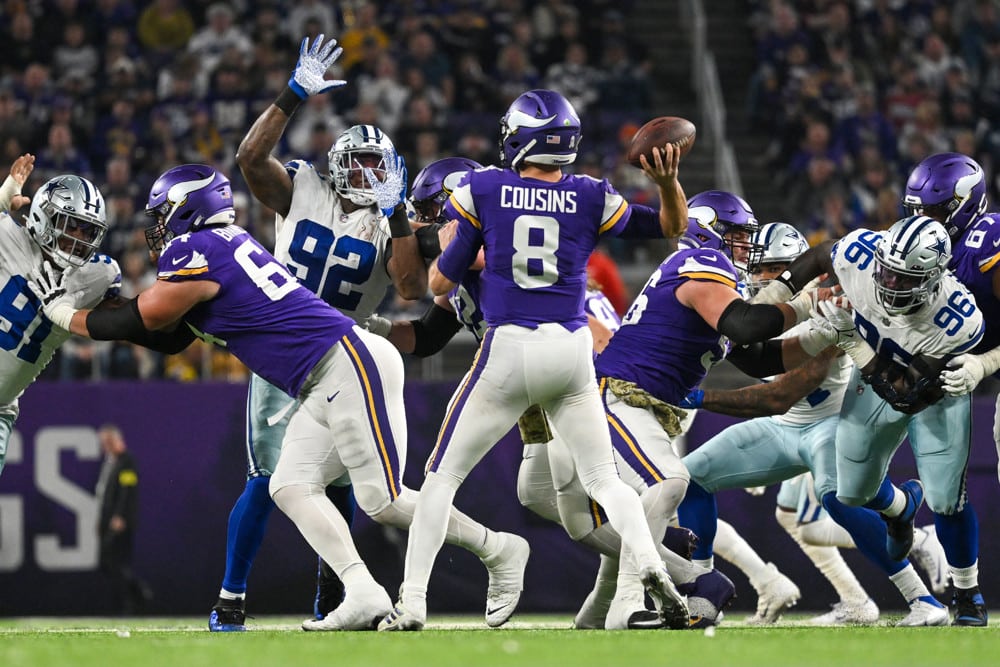 SGPN is back with the Week 14 Fantasy Football Rankings Update. It’s one of the most pivotal weeks in fantasy football as we close out this year’s fantasy football regular season. Week 14 could seal a ticket to the playoffs or move you up the standings for an extra payout; but it doesn’t help that we have many teams on Bye.

Fantasy Football owners will be put to task this Sunday, but SGPN is here to help! Check out our updated rankings below! We also included our top five players rising up their positional rankings in week 14.

Kirk Cousins is my QB9 in Week 14. He’s loaded up with a great matchup against the Detroit Lions. The Lions allow the most fantasy points per game against opposing quarterbacks this season. This game total is 52.5, as this matchup should offer plenty of offense and scoring chances by both teams.

The game flow should feature a lot of passing, but both teams also have reliable running games, so I expect the total to cash and for both quarterbacks to benefit in fantasy football. I have Jared Goff just two spots back at QB11.

Tony Pollard enters Week 14 as my RB10. Like Cousins, Pollard gets a top-tier positional matchup in week 14 against the Houston Texans. The Texans allow the most fantasy points per game to the running back position.

The Houston Texans are the most run-on team in the league. They’ve allowed 329 rushing attempts for a league-leading 1730 yards to opposing RBs. The Texans also allow the most rushing touchdowns in the NFL to opposing RBs; Pollard should be in line for a big week.

It also helps that Tony Pollard is absolutely on fire right now. He has eight total touchdowns in his last five games. In four of those games, Pollard went north of 100 all-purpose yards. It’s a great time to be a Pollard owner. He’s a league-winning asset as he’s evolved into the lead RB for the Dallas Cowboys.

Christian Kirk faces off against the Tennesse Titans in Week 14. In case you haven’t caught the trend, the Titans allow the most fantasy points per game to the wide receiver position.

Kirk enters this week as my WR6. The Titans allow the most receiving touchdowns to wide receivers as well as the second-most receiving yards against them.

Kirk has three touchdowns and has reached 100+ receiving yards in three of his last four games. He’s a top ten play in week 14, don’t hesitate to fire him up in your Underdog Battle Royales and DFS Slates alike.

If A.J. Brown didn’t enlighten you on the intricacies of Revenge Games in Week 13; Hockenson will put nail to coffin in week 14. Hockenson returns to Detroit to take on the team that jump-started his NFL career. The Lions are a great matchup for opposing tight ends and I fully expect Hockenson to find the end zone this Sunday.

Pair that with a handful of receptions and a few big splash plays and you’ve got yourself a top 5 TE in week 14. If you want to get more creative with your daily lineups, a Cousins/Hockenson stack might be a good counter to the many expected Cousins/Jefferson stacks.