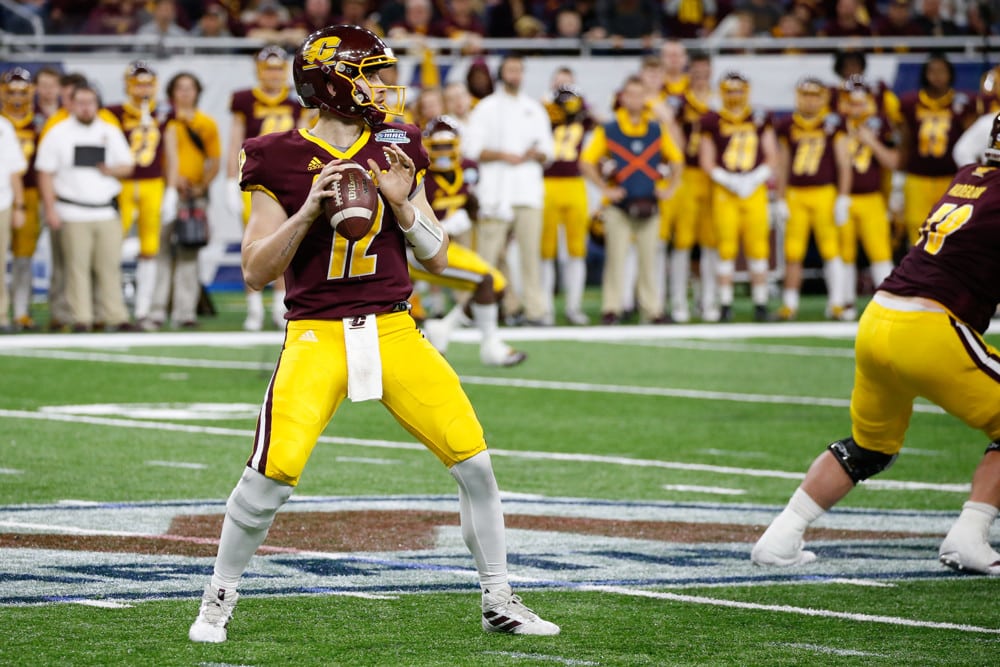 After 47 rounds, plus two quarterback additions, the Orlando Guardians’ depth chart has started to take shape. The Orlando Guardians’ roster had some interesting additions and needs some additional depth. However, they went out and got their guys and are ready to put together their depth chart. Which ones will lead their team once the season rolls around? The Guardians will look to make an impact in the XFL’s comeback. As we’ve seen in spring leagues, where you’re drafted doesn’t necessarily indicate starting position. Which players will win the starting jobs? Without further ado, let’s take a closer look at the Orlando Guardians’ Depth Chart projections and analysis.

The Orlando Guardians’ depth chart starts with the quarterbacks selected in the day before the official draft. This is one of the more interesting quarterback rooms where I could actually see both quarterbacks playing. Similar to how the New Jersey Generals utilized two quarterbacks last year in the NFL. Both of these quarterbacks have the skill set to become the starter. The first quarterback, Quinten Dormady, who got some experience in the CFL last year with the Alouettes. He’s a pure pocket passer.

Deondre Francois is the former ACC Rookie of the Year award back in 2016 with Florida State. He had three years of productivity before an off the field incident saw him removed from FSU. He finished his career at Hampton College and has played in the FCF and TSL. This resume sounds like somebody else, DeAndre Johnson, who just finished a really good season at the USFL. Francois and Dormady will compete for the starting job, but both could have an impact this year. Kidd will provide backup as he develops, coming from the small school of Redlands.

Quinten Dormady audibles and then throws a nice back-shoulder fade to Brandon Johnson, who records his first-career touchdown. pic.twitter.com/0PQAbiQqD4

The Orlando Guardians’ depth chart at running back is a little thin, with only two running backs. In fact, they waited until the fifth round before they took their first in Jah-Maine Martin. Martin played ball at North Carolina A&T and had 1,246 yards and 20 touchdowns in 2019. He spent some time with the Indianapolis Colts earlier this year in mini-camp. Martin was projected to be the top HBCU player in the NFL draft before the Covid-19 pandemic hit, limiting the 2020 and 2021 seasons. Still, he’s a strong 5-10, 220-pound running back who will have an opportunity to bowl his way through defenders this year.

He’ll be complemented with change-of-pace back Devin Darrington out of Virginia. Darrington had limited carries in Virginia, but he did a lot with the limited carries, averaging 7.4 yards per carry. He’ll look to serve as the lightning to Martin’s thunder. Taylor, out of Florida, will also look to push for some playing time.

The Orlando Guardians’ depth chart has a deep receiver room with a lot of talent. Despite being the last receiver taken by the Guardians, Cody Latimer has a good chance to earn the top job. Latimer has the most professional experience, playing in the NFL with the Broncos and Giants. Charleston Rambo had 1,172 receiving yards and seven touchdowns his last year in Miami. He spent a little time with the Panters and now gets another shot at the professional level. Guidry is a big 6-4 redzone target who had eight touchdowns at Mississippi State. Jamiel out of Stonehill has been in the FCF and the TSL. He has had some success in spring leagues and now looks to make an impact in the XFL. Byrd has a lot of experience in other professional leagues playing in the AAF, TSL, CFL, and the IFL.

Miles is a speedy, shifty receiver who I think will still make impact whether he earns a starting job or not. He creates matchup issues in the slot. Smith had 2,545 yards and 31 touchdowns and will look to make the most of his opportunity at the professional level. Aristilde spent time in the CFL and will serve as good depth. Thompson came from Langston and will look to develop at the professional level.

Daniel Jones with a STRIKE to Cody Latimer in his opening drive.#NYJvsNYG

It’s pretty easy picking the top tight end on the Orlando Guardians’ depth chart. In fact, the Guardians only drafted one tight end, the only team to do not have at least two. Becker is a 6-5 monster who can block well as make an impact in the passing game. He’s had some professional experience with the Cardinals and Falcons ad will now get his opportunity to start. McGriff will serve as his backup after playing college ball at Florida State.

The Orlando Guardians’ depth chart has a lot of athletic offensive lineman on their roster. The biggest of them, Jachai Backer, stands at 6-9 and was ranked as the number one tackle out of Virginia as a prospect. Furcron is a very reliable guard who started 46 straight games in college. Spady has limited experience but a lot of talent. Kamali Matthews may be undersized at 6-2, but he’s extremely athletic. He may end up becoming a guard even though he played tackle in college.

Frazier has played both offensive and defensive line and has a lot of versatility. He retired due to injury but is healthy now and ready to prove himself. Ighofose needs some development time but has a ton of potential. Even though Page played for a small school like Merrimack he garnered interest from the NFL. Deng came out of Northwestern Oklahoma State and is looking to prove he can last around a professional level.

The Orlando Guardians’ depth chart at defensive line started with Nick Coe. Coe played at Auburn and also spent time with the Patriots and Dolphins before getting a shot in the CFL. He gets another opportunity to prove himself and show he’s NFL ready in the XFL. With back-to-back picks the Orlando Guardians’ roster added Gerald Williams after Coe. Williams will help anchor the defensive line. Maponga has bounced around several NFL teams after being drafted in the fifth round. He’ll look to tap into his potential. The same is true with Schad out of Oregon State who got some time with the Cardinals.

Emmanuel Olenga played at Tennessee State and even though he didn’t have much exposure, he’ll look to make the most of his opportunity. Patton was recently on the Colts and now gets another opportunity. Jones played for a big school but didn’t get a ton of playing time. He’ll look to push his way on to the Orlando Guardians’ roster. Gemmel was added in the open phase and will also look to push his way in.

The linebackers are another smaller unit on the Orlando Guardians’ depth chart. The first linebacker they drafted was Terrance Smith out of Florida state. He has experience in both the NFL and the CFL. Their linebacking corps should be led by Decalon Brooks, who has linebacking pedigree in his blood. He’s the son of former NFL linebacker Derrick Brooks. Plummer was another linebacker with experience at the professional level, having spent time with the NFL, AAF, and CFL.

Henry and Thompson were added in the open phase and will look to work onto rotation. With two Terrance’s helping lead the unit, the Guardians will likely move one of their more versatile linemen to the linebacking position as a pass-rushing linebacker or add more in the supplementary draft. A guy like Scoobie Wright would be perfect.

The Orlando Guardians’ depth chart got to add the first cornerback to their depth charts out of all the teams. They used that pick on C.J. Holmes out of Jackson State. He doesn’t have a ton of experience or college stats but did garner interest from the Saints. He’ll likely pair with Javaris Davis, who has also spent time in the NFL with the Chiefs, Dolphins, and Bengals. Mike Lee played safety at Kansas but was in NFL camps as a cornerback. He’ll move back to his natural position here and start at safety. Collier is a former Legacy Bowl Defensive Player of the Game and even though he normally played cornerback, I think they find a way to make sure he’s on the field often, even if that means starting at safety.

Virgin kept up the Orlando Guardians’ roster trend of adding players that bounced around the NFL. Smitherman was a four-year contributor in college so has plenty of experience. Murphy is another player who’s been in professional leagues with the NFL and the CFL. Tatum returns to the XFL after taking part in the 2020 league. Najeem Hosein will look to gain more experience and develop his potential. Williams, Williams, Durr, and Rogers were all added in the open phase and will look to push for playing time as they develop at the professional level.

CB Javaris Davis is looking forward to matching up against our receivers in practice 😤 pic.twitter.com/GczYF6AATY

The Orlando Guardians’ depth chart added three players to their special teams’ roster. They started by adding kicker Jose Borregales. He went 37 for 37 kicking extra points his last year at Miami. He finished 20 out of 22 in field goals. Andrew Anckle will be serving on the Guardians as the punter. Tommy Auger has played both wide receiver and tight end in St. John’s. He’s played in the Austrian Football league and the FCF at tight end. This pick makes sense because he can serve as a long snapper as well as help with the lack of tight end depth.

The Orlando Guardians’ roster is set, and they’ll look to make an impact in the new XFL in 2023. While they lack depth at some issues, they signed guys they thought that could contribute and make a difference.