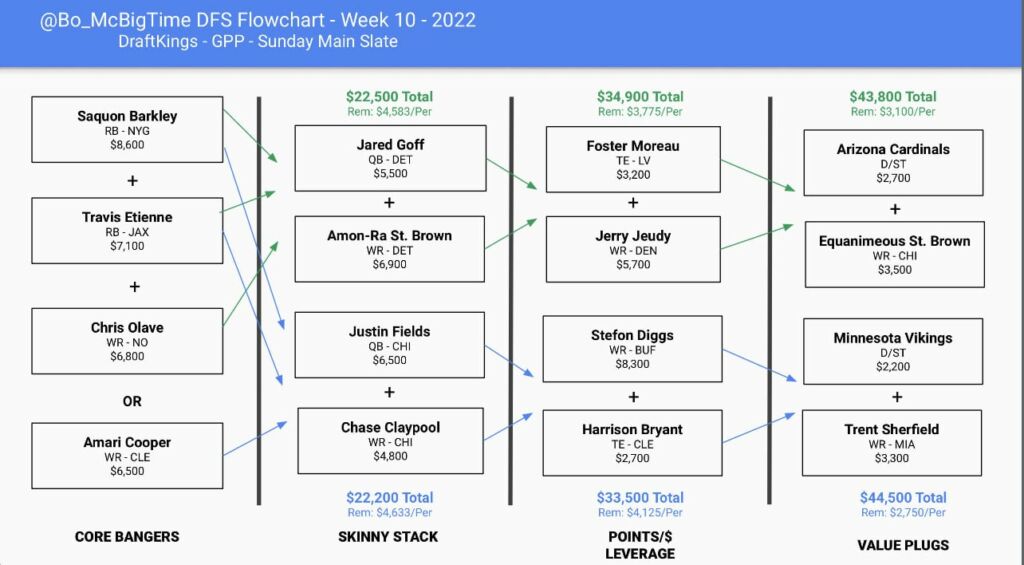 The DFS team at SGPN was prodigious last week. The two lineups in the Flowchart were in the green last week on the strength of the running back position. If you followed along with my content closer to lock, you also pivoted from Tee Higgins to Joe Mixon as a pivot play on leverage. It turned into a record-breaking day for those who had Mixon rostered in DFS. Justin Fields was another play that was carrying heavy exposure in my player pool.

Week 10 presents a similar 10-game main slate on DraftKings, but with some games that sport higher implied scoring totals. Once again, the key will be to monitor rostership projections and pivot to players who can pop off with less popularity. Beat the sheeple in the DFS fields who are stacking the same QBs and WRs as everyone else.

If we can identify the master keys (optimal plays) and fit them in under the cap, this will be a very cheery holiday season. The DFS Flowchart for Week 10 is designed to represent my thought process for building out lineups for the given slate. Much like the Elder Scrolls game ‘Fable,’ we can choose one of two divergent paths from the same starting point and architect some really strong lineups. Let’s get to the Week 10 NFL Flowchart!

It isn’t often that I prefer to hone in on two RBs in my core players. This week, caution can hit the breeze because I’m gobbling all the chalk to build around Saquon Barkley and Travis Etienne. When analyzing my player pool and subsequent lineups from the optimizer tool I use at Run the Sims, I also discovered that there were more 3RB builds than usual this week.

Robust-RB drafters in season-long fantasy are joked to be the brutes of the bunch, but in DFS, there’s much less semblance of a stigma. My other two core plays this week are WRs in fantastic matchups. Chris Olave and Amari Cooper are the leading receivers on surprisingly-productive offenses who are also going against weak coverage units in Week 10. Cooper is among the best leverage plays on the entire main slate, to boot.

DFS managers of all sorts of ability levels get into a rut sometimes. Quite often, it’s because they try to wedge every lineup together with a double stack or big game stack. That is statistically the most frequent way to optimize a DFS lineup on most slates.

My opinion is that this is not that kind of slate. The high total games feature offenses with centralized passing volume, and thus a double stack would work against an optimal lineup. I found that I fancied my lineups with skinny stacks a lot more this week.

Jared Goff and Amon-Ra St. Brown have been attached at the hip since late last season. The TJ Hockenson trade made that target pipeline all the more condensed. Justin Fields targeted his new weapon Chase Claypool six times in his Bears debut, despite the young Golden Domer only logging a 35% snap share. I say that grows even further in a potential shootout with Goff’s Lions.

The most leveraged player in the main slate field is likely to be Cooper Kupp. I will have about 30% exposure to the Triple Crown winner, but for the above lineup, I could only squeeze in Stefon Diggs. His rostership is depressed with the perceived assumption that his old Vikings teammate Case Keenum will be called upon to start for the injured Josh Allen.

I still love Diggs (and Keenum) in a revenge game versus those Vikings, who have really struggled in coverage this season. I love Jerry Jeudy this week. He has tons of upside coming off the Broncos’ bye week. Hopefully, Russ can boil water without burning the house down. Harrison Bryant and Foster Moreau are great values at TE, filling in for injured starters.

The Vikings and Cardinals are the two DSTs I’ll be most heavy on. Both are adept at rushing the passer and forcing turnovers. Amon-Ra’s older brother Equanimeous St. Brown is not a sexy name in fantasy, nor is former 49er Trent Sherfield.

Each of them should feast as fringe plays versus defenses that will be focused elsewhere. Value plays this week are really gross. The key will be to trust the data and ignore the name on the back of the jersey. This slate will have some wild names scoring touchdowns on Sunday. Be the only one celebrating when others are whining.