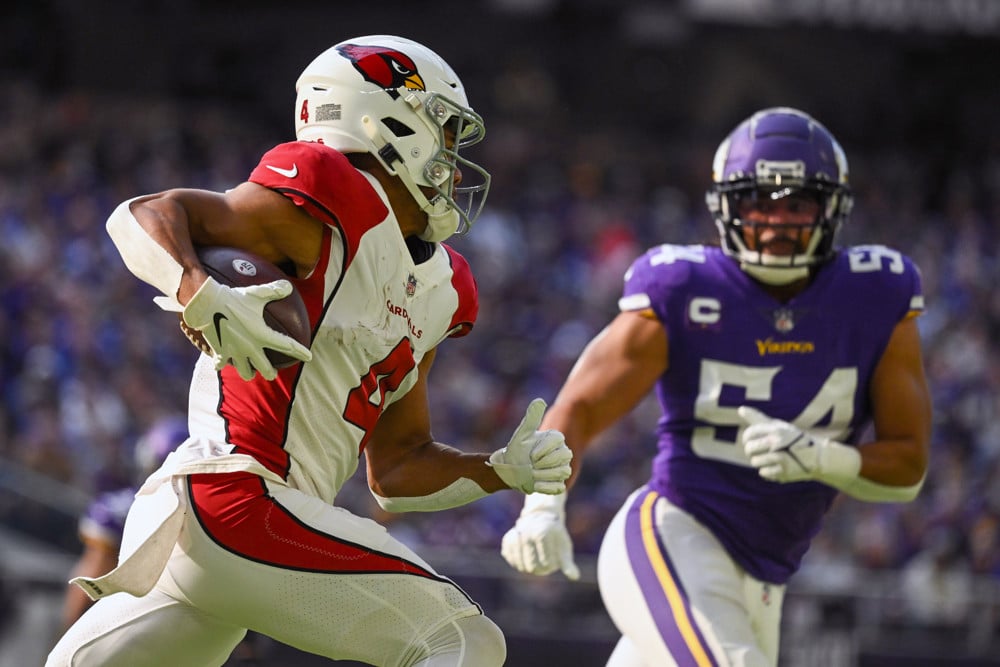 The Week 9 FAAB Cheat Sheet is here and ready to guide you to victory. We’re halfway through the fantasy season, yet, we are still asking the same question: who do we spend FAAB on? How much should we spend? Is there even anyone worth spending any of my FAAB on? Well, these questions really need to be answered by you, but we are here to help make these decisions a little easier.

The current landscape for waiver players isn’t a paradise by any means, but I’ve seen it be much worse than it currently is. Maybe you are the manager who just lost Ja’marr Chase for 4-6 weeks or has Cooper Kupp and really isn’t sure if he will play this week with that sprained ankle (I mean, really, Sean McVay, what were you thinking playing Kupp that late into that lost cause of a game?).

The injuries pile up on us week after week, and we are trying our best to win our fantasy matchups, which sometimes means taking a calculated waiver wire dart throw on the roster and hoping it’s a bullseye. Here are some calculated FAAB targets for week nine and beyond.

Drake hasn’t been bad in the limited touches he has got. In week 6, he rushed for 119 yards and one touchdown while adding one reception for 8 yards. He handled a majority of the carries. In week 7, he disappeared while Edwards was involved.

Last week he rushed for 62 yards and added four receptions for 5 yards and a touchdown. Now with Gus Edwards tweaking his hamstring, Drake should be in line for most of the workload until Edwards or Dobbins come back, which could be a few weeks. While Drake is the primary back, id expects him to be a back-end RB 2.

Rondale Moore is averaging 6.5 targets per game over the last five weeks. This past week he saw eight targets which he turned into seven catches for 92 yards and a touchdown. In the past five weeks, he has seen an average snap share of 92.8.

The only wide receivers that Kyler Murray seemed to have eyes for this week were superstar DeAndre Hopkins and Rondale Moore because no other wideout had more than 12 yards receiving. The arrow is pointing up for Rondale Moore, and he needs to be rostered in all ten teams or more leagues and viewed as a WR 3 with WR 2 upside.

We got word yesterday that Rashod Bateman is expected to miss a few weeks with a foot injury. Devin Duvernay should fill the primary wide receiver role for the time being. On the season, he has been targeted 32 times and has 24 receptions for 313 yards and 3 TDs.

With the only other respectable option in the passing game being Mark Andrews, who is also banged up, I would be led to believe that the Ravens will want to get Duvernay much more involved. The Ravens rank 27th in passing play percentage, which is not great, but Duvernay could have some homerun plays that make him a viable starter.

Go on ahead and keep sleeping on Devin Duvernay pic.twitter.com/kXnyLX6o1l

Welcome back to fantasy relevance Garret Wilson!  Wilson finished with a career-high 115 receiving yards and caught six passes for the first time since Week 3. He finished with his first double-digit non-PPR scoring day since Week 2.

In the first game since Breece Hall went down for the season with a knee injury, the Jets appeared to want to throw the ball since the running game was not working out. If Zach Wilson and the Jets are going to be throwing the ball anywhere near as many times as they did this game, I’d expect Garret Wilson to be the primary recipient of most of the targets. He should be viewed as a WR3/4

Murray has a defined role in Denver’s backfield committee. He is rotating with Melvin Goron but seems to be getting the goal line work. The Broncos offense has been pretty bad, to say the least, but Murray may be a small bright spot for them and is one of the best options on that offense to find the endzone, which he did this week. Russel Wilson has not been as advertised before the season.

His decision-making is dreadful, field vision is all but not there, and the Broncos would be doing themselves a favor by trying to run the ball more. Murray is worth a roster spot in 12-team leagues, should be considered an RB3 with RB2 upside if he scores a touchdown, and into the flex consideration after the bye. 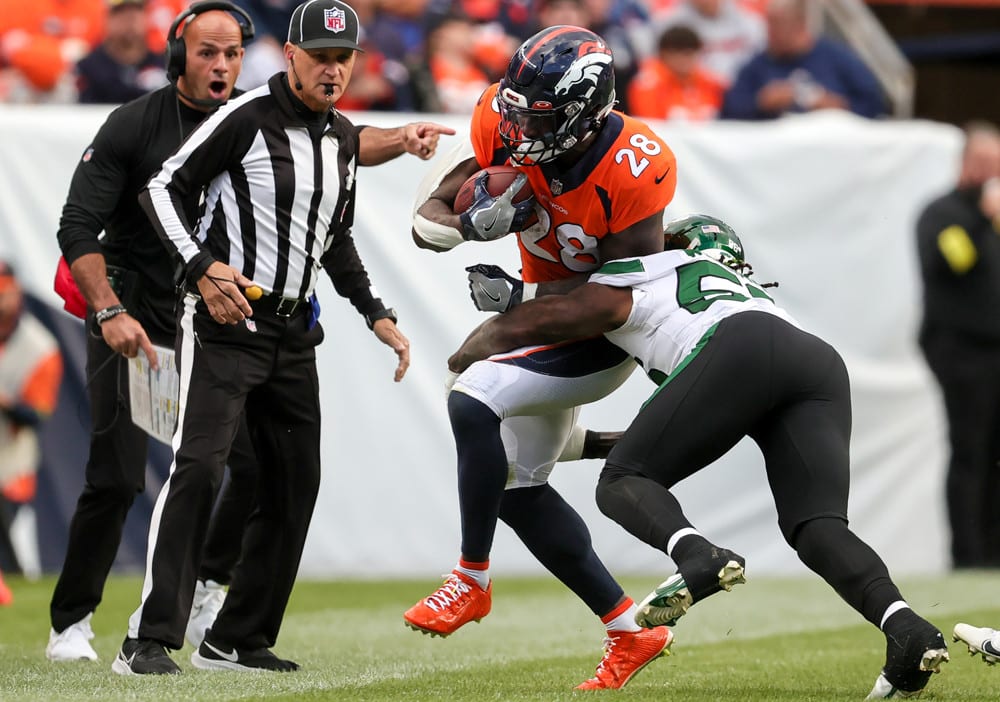 At the beginning of the year, I had highlighted Rachaad White as a potential rookie sleeper. For the past few weeks, the rookie has been slowly eating into Leonard Fournette’s workload. Last two games, he has had seven touches in each game, both losses.

He looks like he could be headed for a continuously growing role, especially if the team continues to struggle. If this team has any hopes of the playoffs, their best bet is the try and win the division and keep Leonard Fournette’s workload manageable.

White’s receiving ability, open-field vision, and potential for much more work makes him worth rostering and could be a league winner if Lenny goes down. At the very least, you are hoping that he brings some flex appeal in the coming weeks.

Fantasy starter moving forward or just a blip on the radar? With top-10 TE finishes in three of his last four games, I’d say he is a full-steam-ahead viable starter. Engram has 32 receptions for 330 yards and 1 TD on the season. Now that may not sound like an excellent fantasy TE, but he currently ranks 10th among TEs in PPR scoring.

The TE wasteland is gross, but Engram has some real appeal. Over the last three weeks, he has carved out a decent role in the offense with an average of 85.3 offensive snap rate while scoring an average of 11.7 PPR fantasy points. Look for Engram to continue to be a pivotal player in the Jag’s offense.

Potential Stashes and Fliers (0-5% of FAAB)

Andy Reid and the Chiefs toyed with us two weeks ago when they announced that Pacheco was going to be the starter leading up to the game. During the game, we quickly learned that didn’t mean shit, and they fooled us all. He managed to get 43 yards on eight carries with no touchdowns. A whopping 4.3 fantasy points.

With that said, I still want to get Pacheco on my team. He has improved and impressed the coaching staff so far this year, and the Chiefs don’t really seem to be too overly committed to Clyde Edwards-Helaire. On top of that, the Chiefs are coming off their bye, so an increase in usage could be in store for Pacheco as Andy Reid had time to scheme him into the system. Getting a piece of the Chief’s offense on a discount is never a bad thing. Grab him for cheap before he has an explosion of a game.

Chiefs found themselves a steal in Isiah Pacheco. Picks up a first down on the screen thanks to his angry style. Brings such physicality to the KC RB room. pic.twitter.com/JGCrzA2Uhp

If Mark Andrews ever misses time, Isiah Likely could be a top 8 Fantasy TE. He showed us that this week when Andrews was ruled out of the game against the Bucs after injuring his shoulder. One of the pre-season darlings, Isiah Likely, was finally able to show off his skills during the regular season with Andrews getting banged up.

Now I’ve read reports that suggest that Andrews could miss this week to let the shoulder heal due to them being on a bye next week. I’ve also read that the Ravens aren’t “too concerned” with his injury, and they expect him to play this week. Which side of the story is correct is a mystery currently, but it wouldn’t hurt to spend a few dollars on Likely because he could again have a great stat line when the Ravens take on the Saints.