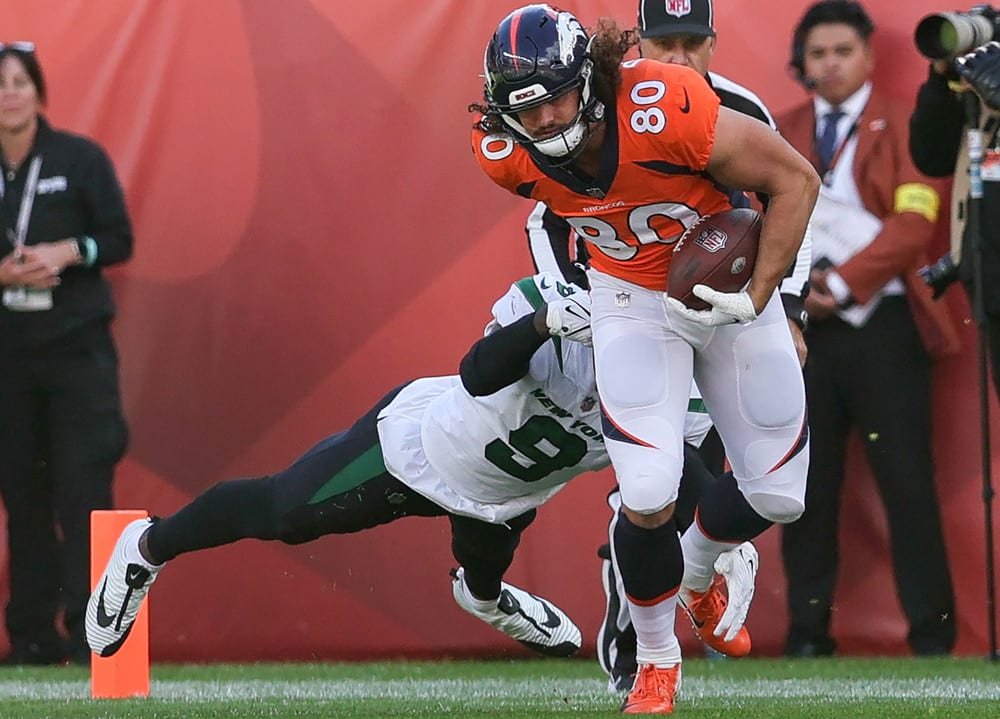 When waiver wires clear fantasy managers still comb back over the seemingly empty player pool trying to find that key sleeper. The conclusion always being that all the good players are obviously rostered already and there are no additions to make. Then every week, miraculously, there are waiver wire options again that we had missed out on from the previous week. This may be because of an injury or a late-season breakout. Regardless, we’re getting down to crunch time as fantasy managers fight for a playoff spot. These waiver wire pickups will be key down the stretch of the season in deciding the winners and losers.

While Rondale Moore is likely rostered in most standard 12-team leagues, it’s worth checking the Week Nine waiver wire as he’s had a slow start to the season. Involvement hasn’t been the issue though. Over the last four weeks, he’s averaging 7 targets a game and has been the clear second Wide Receiver. While that hadn’t translated to fantasy production, Moore broke out with 7 catches for 92 yards and a touchdown this past week. It was highlighted by a long touchdown grab where he used his speed to make some defenders miss as he sprinted for the endzone.

Kyler Murray will likely continue to be among the league leaders in pass attempts as well as the Cardinals frequently play from behind. Moore is a potential flex play going forward that I would be willing to spend up to 10% of my FAAB budget on.

Rondale Moore decides to do this after everyone benched him
pic.twitter.com/b0aARuhflc

As we continue to look for saviors at the Tight End position look no further than the Bronco rookie Greg Dulcich. Despite only appearing in his third game of the season Dulcich has a clear rapport with Russell Wilson. He has 17 receptions for 182 yards and a score in that time which is particularly impressive considering how long it typically takes young Tight Ends to develop. This was highlighted by 78 yards receiving on one drive this past week in London that ended in a Latavius Murray touchdown.

Unfortunately, the Broncos are on a bye next week and he won’t be able to help your lineups next week. However, he’s a borderline TE1 after that with a few soft matchups starting in Week 10 against the Tennessee Titans. Dulchich is another player I’d be willing to spend 10% of my FAAB budget on if I was desperate for a Tight End.

Greg Dulcich does not look like a rookie playing in just his 3rd NFL game. Dude is out here moving and shaking like a seasoned Vet.

Following the trend of target volume in this article, we now arrive at another one of my favorite receivers. Donovan Peoples-Jones has yet to score a touchdown this season but has been very consistent as of late. He’s gone over 70 yards receiving in three of his last four performances and is already a flex play going into his Monday night matchup. Particularly with David Njoku out for an undisclosed period of time, Jones has a solid floor considering the volume he’ll receive.

If he is still miraculously available on waivers after tomorrow he’s a must-add ahead of Deshaun Watson’s return. When that happens your talking about a player with WR2 upside going into the fantasy playoffs. You might need to wait a few more weeks before it truly pays off, but holding onto him could be well worth it. Jones is a Player I’d be willing to spend anywhere between 5-7% of my FAAB budget on.

Worth a look in deep leagues.

Van Jefferson made his 2022 debut this past Sunday after having a knee procedure that sidelined him for the first seven weeks. Despite recording no stats or targets, he did have a 55% snap share. After missing nearly half the season, it should come as no surprise that Jefferson started off slow in his first game back. This is still a player who finished as the WR36 in PPR leagues last season too. He scored double-digit fantasy points in 9 of 17 outings and scored 6 touchdowns in 2021 as well. To this point, none of the receivers on the roster have stepped up to be a consistent second option after Cooper Kupp. As he regains his health I wouldn’t be surprised if he overtook Allen Robinson in the pecking order. I’d spend 5% of my FAAB budget on Jefferson if he hasn’t been stashed on another manager’s IR.

Van Jefferson could be the missing factor for this Rams offense. He’s for sure a “Watchlist” guy who’s chilling with 20% rostership. i won’t be surprised the next couple weeks he hold’s a higher target share than
Allen Robinson.

Add him to your Watchlist now.

After a lot of preseason hype, Isaiah Likely finally broke out in Week Eight catching 6 passes for 77 yards and a touchdown. Mark Andrews did leave the game due to an injury, nonetheless, it was great to see him have one of the best Tight End performances of the week as a fill-in. It’s been reported that Andrew’s shoulder injury isn’t serious. However, teams have been known to sit players ahead of bye weeks to give them extra rest.

Odds are he plays leaving Likely as a back-end TE2 with upside. If Andrews were to miss this game though that would vault him into TE1 territory, Either way, he’s a player to stash on a team known to deploy two Tight Ends without a reliable second Wide Receiver. I would spend 5% of my FAAB budget to acquire him from the Week Nine waiver wire if I wanted a speculative Tight End stash.

This was a great call by Matthew Berry on Sunday. He said he wouldn’t be surprised if Ronnie Rivers got the bulk of the opportunities and indeed he did. He had 12 combined rushing attempts and catches compared to just 6 for Henderson. Rivers wasn’t overly impressive with this expanded workload totaling just 36 combined yards. Nonetheless, this was a tough matchup against the 49ers who have one of the best front sevens in the league. This is still a jumbled backfield with no clear leader at the moment. Rivers is a great stash in some deeper leagues while we wait for this offense to try and figure it out. I’d be willing to spend 2% of my FAAB budget on him this week and will monitor his Week Nine workload closely.

Just putting this out there: Very strong hunch the lead RB for the Rams tomorrow is Ronnie Rivers. Brown has been unimpressive, Kyren isn’t back yet and Henderson isn’t healthy. Tough matchup with SF but I’ve speculatively added Rivers in every lg I need RB help in case he pops.

Fantasy managers started Kenyan Drake two weeks ago and Gus Edwards plays great. Fantasy managers then proceeded to start Edwards in Week Eight and Drake plays great. As is life in the fantasy football world. This is another murky backfield that’s tough to get a grip on. Dobbins is out for the foreseeable future and Edwards also hurt his hamstring this past week too. The injury was deemed minor, but Drake is a flex option in Week Nine if Edwards sits out. If someone dropped him after his dud performance last week I’d be willing to spend 1% of my FAAB budget to wait on the health of Edwards.

For the third time this season Kenyan Drake becomes a wavier wire pick up 😅🥴🥴 what the…..🤬

Thanks for checking out this Week Nine waiver wire article and good luck this week! Check back daily for more fantasy football content from SGPN daily.