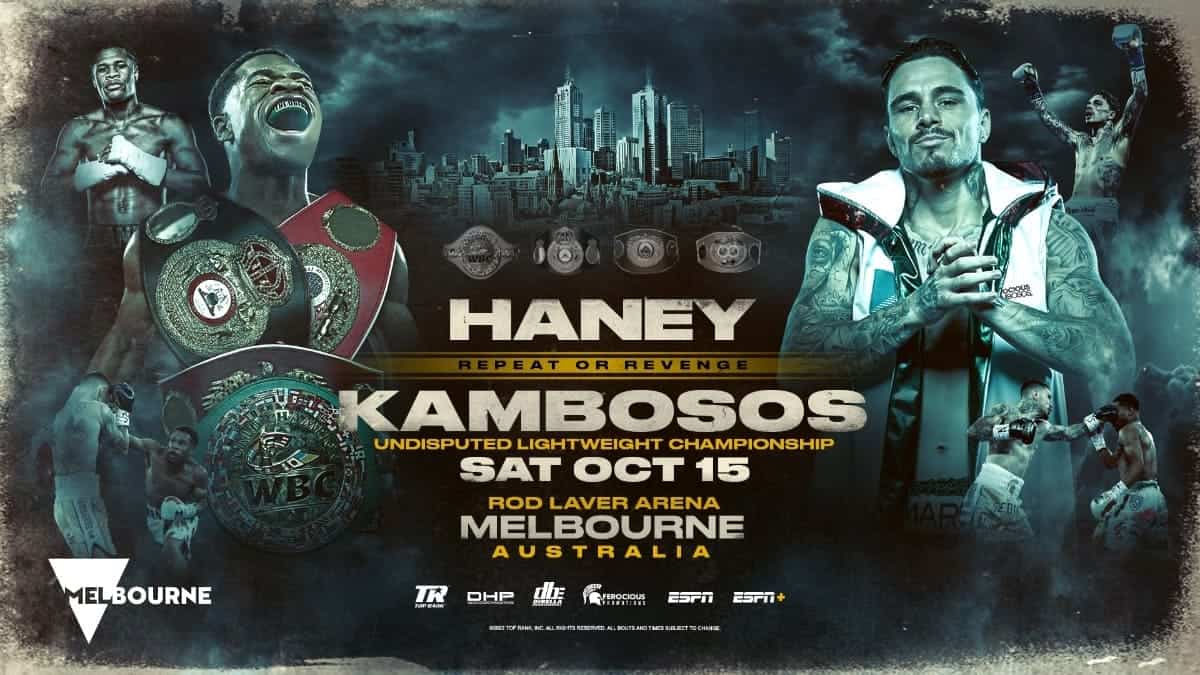 Saturday, October 15th is a jam-packed weekend for boxing fans around the globe. In Brooklyn, New York there are two world title eliminator fights being promoted by DAZN. But, the big day actually starts in London, England with a stellar all-female fight card, headlined by World Championship fights: Claressa Shields vs Savannah Marshall, and Mikaela Mayer vs Alycia Baumgardner. The card was originally postponed due to the country’s mourning of Queen Elizabeth II’s passing. Unfortunately for women’s boxing, rescheduling this card to the most stacked boxing day of the year may remove the spotlight it was originally supposed to get. Lastly, the best fight of the night, in my opinion, takes place in Melbourne, Australia. Devin Haney vs George Kambosos in an Undisputed Lightweight Championship rematch. Boxing odds on all three World Championship fights with picks and bets from the Sports Gambling Podcast Network, are coming up, DING DING!

The hometown man George Kambosos Jr. (20-1) enters as the big underdog. In the first fight, Devin Haney (28-0) completely dismantled Kambosos. “Ferocious” Kambosos attempted to outbox Haney, and it became very clear during the first fight that Haney was the better defensive fighter. Kambosos didn’t utilize the correct game plan to beat Haney. In order for the result to change and tilt in Kambsosos’s favor, he needs to pursue Haney early and often to attempt to not allow Haney to get comfortable, with the goal of hurting the American. Although Kambosos has the home crowd advantage, I think the San Francisco, California native wins by another unanimous decision.

Claressa Shields (12-0) is a two-time Olympic gold medalist and is currently the 160-pound WBA, WBC, IBF, WBF, and Ring champion. She has held 12 belts across three weight classes: 154, 160, and 168 pounds, and is the fastest boxer in history (male or female) to do so. She now goes by the nickname of “GWOAT”. Shields has suffered a loss in her professional fighting career, but that was in MMA under ESPN’s PFL promotion. She is undefeated in her pro boxing career and is 77-1. The one loss was a controversial loss at 17 years old to Savannah Marshall (12-0).

Shields, now 27, aims for vengeance against the 31-year-old Marshall. The UK native Marshall is viewed as the stronger puncher with seven KOs, but Shields is the better boxer with only 2 KOs. Ten years later I think Shields has faced the better professional competition. Knowing that I favor the woman from Flint, Michigan in Claressa Shields to win this fight.

THE BET: Claressa Shields to win -115

#ClaressaShields lost to #SavannahMarshall in the AIBA Women’s World Boxing Championships in 2012. Idk wtf these judges were looking at but #Shields was stalking, backing up, head hunting, BULLYING TF OUT OF MISS MARSHALL! 🧐

Mikaela Mayer (17-0) and Alycia Baumgardner (12-1) aim to unify three (IBF, WBC, and WBO) women’s featherweight titles in Saturday’s co-main event. It’s not normal that you see two Americans fighting across the pond in a unification bout but that just speaks volumes about what this fight card is attempting to do. Mayer, the Woodland Hills, California girl was a highly touted prospect through the amateur scene. She has been promoted really well by Bob Arum and Top Rank Boxing. They have provided her with great competition in undercards on ESPN. Whereas Baumgardner, from Detroit, has not had the same type of treatment.

The build-up to this fight has been amazing. Mayer even tried to kick Baumgardner at the press conference. The biggest lynchpin for me in trying to handicap this matchup is that Baumgardner likes to stand and trade blows. Mayer is excellent on the outside, but she is susceptible to being drawn into the pocket. Even if that happens, I don’t think I’ve ever seen Mayer hurt. She has the ability to wear powerful punches really well. I think Mayer wins enough rounds to be triumphant in this fight via decision.

Looks like it's not just Claressa Shields and Savannah Marshall where there's bad blood! 👀

Things got heated between Mikaela Mayer and Alycia Baumgardner at the weigh-in ahead of their unification bout 👿#BBCBoxing pic.twitter.com/wxA0yLArVc