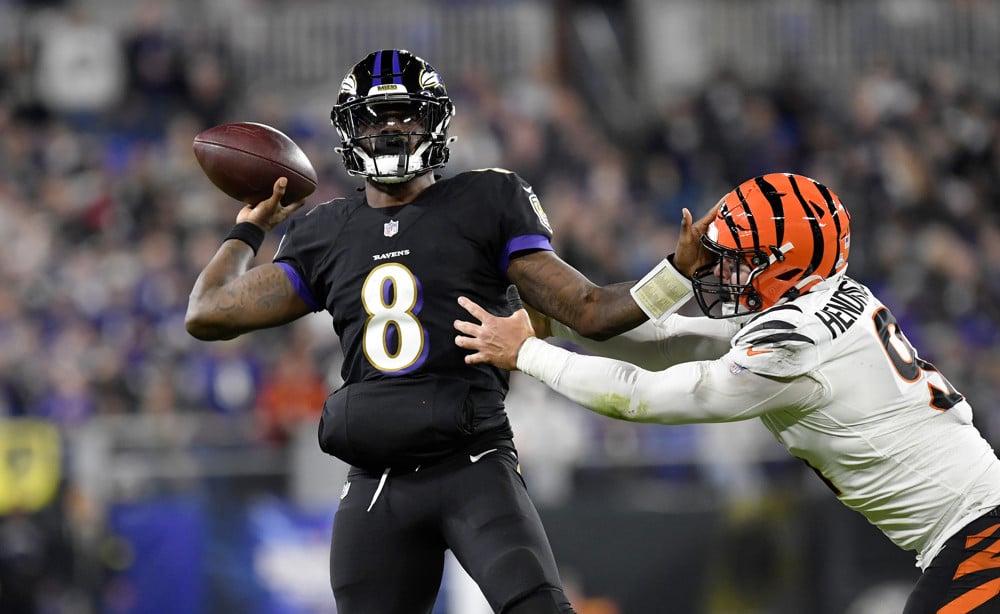 In this article, we’ll break down the top contenders for the NFL MVP Award. The 2022 NFL season has officially entered its second quarter and the MVP race has never had so many viable contenders. Let’s look at where some of these players stand, their odds, and whether they truly have a chance at taking home the NFL MVP Award.

It’s hard to beat the start Josh Allen had to his 2022 season. Heading into Week 6, Allen has thrown for 1600+ yards, with 14 touchdowns and 4 interceptions (and he isn’t slowing down!). In last week’s mauling of the Pittsburgh Steelers, he threw for 348 yards… in the first half alone. Last week was a great spot to see what this Buffalo team was truly capable of. In Week 5, we asked the same questions. Was this a look-ahead spot to Kansas City? Would we see another repeat of last year’s Jacksonville game? Absolutely not. This Buffalo team is focused, and Josh Allen is rightfully the frontrunner to win MVP. At +200 odds, I am buying more stock in the Josh Allen MVP campaign.

No Tyreek? No problem. Throughout 5 weeks, Patrick Mahomes threw for 1,400 yards with 15 touchdowns to 6 different receivers. In Week 5, Patrick Mahomes mounted an impressive 17-point comeback and the Mahomes-Kelce connection never looked stronger. With the inevitable Week 6 shootout incoming between Mahomes and Allen, this MVP field is slowly turning into a 2-man show. If you like Patrick Mahomes to win MVP, I suggest jumping on it now before the price gap between him and Allen closes.

This was my NFL MVP preseason pick at +2200 and am still feeling confident about it. Lamar is literally proving his worth to this Ravens organization. In the first 5 weeks, he threw for 1,067 yards with 12 touchdowns. On top of that, he rushed for 374 yards with 2 touchdowns. He continues to prove that he is an issue for defenses across the league. Last week, Jackson bolstered his MVP talks with his 9th career comeback win against the defending AFC Champions. I will continue to hold and buy stock in Jackson.

Call me crazy; I am selling high on Jalen Hurts. Maybe I am just jealous that I never got in on the preseason hype. Only time will tell. What I do know is he has thrown for 1300+ yards, 4 touchdowns, and rushed for 266 yards with 6 touchdowns. He has performed well above expectations against some below-average competition. The Eagle’s wins come against the Cardinals, Lions, Jaguars, Commanders, and of course Kirk Cousins in primetime.

The last time we saw the Eagles face a quality opponent they got demolished by the Tampa Bay Buccaneers in the playoffs. I don’t want to discredit what the Eagles have been able to accomplish this season. I just want to see Jalen Hurts in a big-game situation against one of the NFL’s top-tier teams. Hurts has played exceptionally, but I fear this pool of contenders will end up playing better. I am out on Hurts as an NFL MVP candidate proven otherwise.

I am fully cashing out on last year’s league NFL MVP. Rodgers and The Packers should right the ship this week at home against the New York Jets, but I can’t make a long-term case for this team to put it together. They will beat up on the bad defenses and struggle against good defenses. They will be a playoff team… nothing more, nothing less. Aaron Rodgers currently sits with a little over 1,000 yards passing with 8 touchdowns and 3 interceptions. This team is missing Devante Adams big time. They are giving average vibes – nothing to write home about. I am selling my stock in the Rodgers MVP conversation completely.

This is my favorite NFL MVP long-shot pick so far this season. Brady currently sits with 1,400 yards, 7 touchdowns, and 1 interception. The numbers aren’t stellar, but this is my momentum play. Roughing the passer shenanigans aside, Brady looked sharp against Atlanta’s defense. This Buccaneers offense looks like it is starting to find its way. Brady threw for 351 yards, with 33 completions to 7 different receivers.  In the next three weeks, the Buccaneers face bottom-ranked defenses in Pittsburgh, Carolina, and Baltimore. If you are interested in purchasing a Brady MVP ticket, I suggest you do it sooner rather than later.