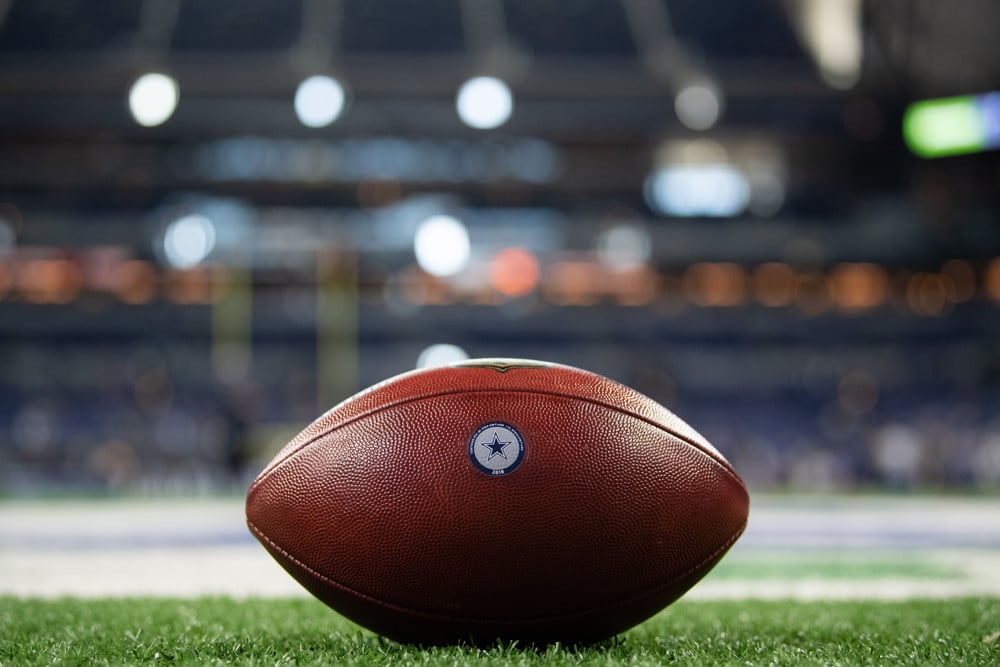 INDIANAPOLIS, IN – DECEMBER 16: A NFL football with the Dallas Cowboys logo on the field before the NFL game between the Indianapolis Colts and Dallas Cowboys on December 16, 2018, at Lucas Oil Stadium in Indianapolis, IN. (Photo by Zach Bolinger/Icon Sportswire)

NFL Snap shares continue to be the drivers for projecting fantasy football performance and week 5 is no exception to that. Last week we discussed the increased snaps of Cole Kmet, Eric Saubert, Breece Hall, Rondale Moore, and George Pickens to watch all of them have their best fantasy football performance to date. This just continues to prove that the SGPN Fantasy Football team is here to help you win.

Most of these movers are a result of injuries which, for most of them, should carry over to future weeks

Eno Benjamin saw a 58% increase in snaps due to the injury sustained by James Conner. He played almost the entire second half and had pretty solid production as he drew 11% of the targets and 31% of the running back work. This percentage has some context as he had all the RB work except for 2 touches in the second half and also got the goal-line work. If Conner misses time due to injury, he could be the primary beneficiary.

We saw Nick Westbrook-Ikhine play a huge amount of snaps with Treylon Burks missing this week. He played more snaps than any other offensive player. I don’t expect this to translate when Burks returns to action but with him landing on the IR, he is worth a waiver wire add. You may see that he only garnered 3 targets but here are a few key stats. Derrick Henry carried the ball 28 times as the Titans had a clear plan to attack the poor rush defense of the Commanders that has allowed the starting opposing RB to gain over 100 yards 3 out of 5 weeks to date. He also was 3rd among WR with 3 or more targets in yards per target (behind Dyami Brown and Gabe Davis). If you have a bench spot available to carry him past the week 6 bye, he is worth an add.

This one just hear me out. Parris Campbell has been playing an average of 81% of snaps. He is getting a ton of opportunities and running a lot of routes. I believe he should be watched in redraft formats and if you have a deep bench, he is worth an add. Coach Reich had a lot of good things to say about Campbell as he was getting healthier during camp and pre-season. He has managed to stay healthy and on the field. The production should follow if the offense can start to find a rhythm now that we are a quarter through the season.

The running back situation in Denver is an absolute mess. Melvin Gordon did see the increase in carries that we expected but he also had another fumble (not credited as a fumble). They brought in Latavius Murray who when filling in for Alvin Kamara last week, garnered 11 carries for over 5 yards per carry and a touchdown. Mike Boone is not the answer and is likely to be relegated to third-down duties. Because Latavius Murray didn’t play this week, there is a chance he was not rostered. If this is the case, you should go get him.

Other things of note from carrying shares are those of the Jacksonville Jaguars and New York Jets. Both of these backfields have fallen into a 60/40 split with Hall and Robinson on the better end. The difference however is that Hall is gaining steam and Robinson is losing steam. We mentioned Travis Etienne as a buy candidate last week and he has now out-touched Robinson for the second week in a row.

Amari Cooper is a guy that you need to pay attention to. He has garnered 10-plus targets in 3 out of 5 weeks and is coming into a schedule where the Browns will have no choice but to throw the ball. The upcoming schedule includes the likes of Baltimore, Cincinnati, Miami, Buffalo, and Tampa Bay. All of these teams are middle-of-the-road against the WR position.

Devonta Smith is a REALLY good wide receiver. When AJ Brown has had a tough cornerback matchup Devonta Smith has eaten every time, to the point at which his snap share has been higher than AJ Browns every week. If you are willing to ride the waves of hits and misses, he is a solid play on a weekly basis.

While Jakobi Meyers doesn’t pop up on this list, he deserves to be discussed. As an impending free agent on the WR market that is quite slim next offseason, Meyers is playing himself into a pretty lucrative contract. After missing 2 weeks, he picked up right where he left off with 80% snaps, 7 catches on 8 targets with 111 yards, and a TD. He is a trade target for me as his value is pretty suppressed.

While not appearing on the week-to-week adjustments, I would be doing a disservice by not talking to you about Alec Pierce. He has seen an increase in target share each of the last 3 weeks. He hasn’t scored a TD or eclipsed 100 yards yet so the buying window is still open. I would suggest trying to move a second-round pick in 2023 for him.

For the second week in a row, Atlanta Falcons WR Olamide Zaccheaus has seen significant snaps and has produced down the field. He is still worth a waiver wire addition to your dynasty team.

We told you last week that Greg Dortch was toast and that Rondale Moore saw an increase in snaps. This week we saw Rondale Moore officially take what Dortch was doing in the first 3 weeks. If Rondale Moore is still on the waiver wire, he is worth an add against a subpar Seattle defense. I suggest picking him up to play this week, then selling after week 6 due to Hopkin’s return.

We mentioned the need to pick up Zay Jones coming off his injury. While the production wasn’t there this week, he still garnered 8 targets. If he is sitting on the waiver wire or is dropped, he is worth the add.