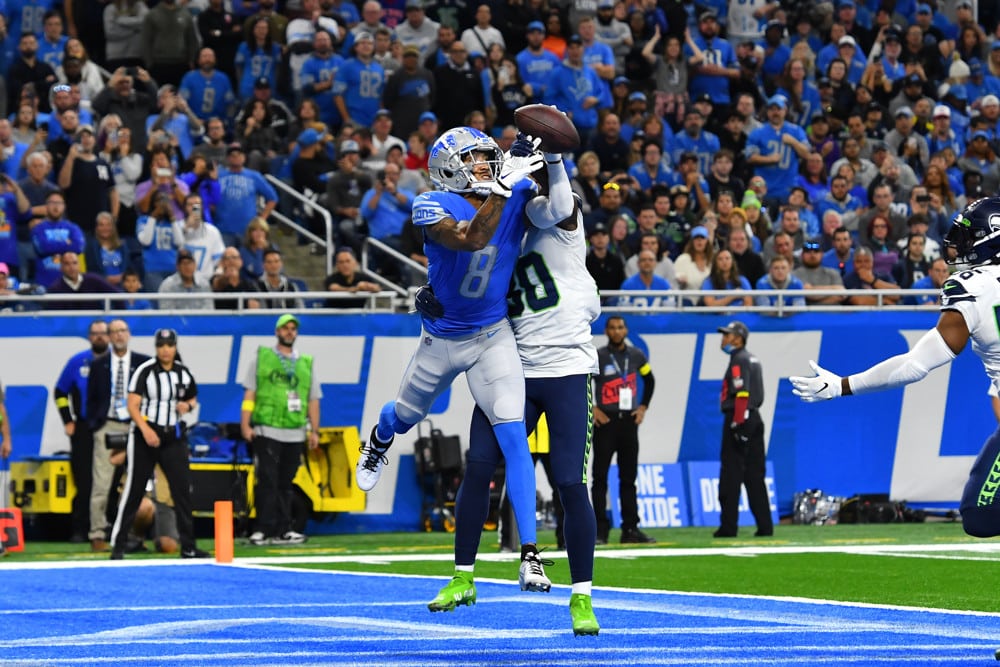 The Week Six FAAB Cheat Sheet is here just in time for the NFL’s first round of Bye Weeks. This can be a tough time for fantasy managers that are facing early-season injuries, but fear not, SGPN is here to assist you in your mid-week waiver wire battles. Owners are bound to be more aggressive with their FAAB spending rate, so it’s time to stay sharp and be mindful of the ebbs and flows around the NFL.

Not only will we review potential season-long gems but also mid-tier targets and free waiver wire options as well. Let’s try not to overspend and manage our budgets with efficiency. We still have roughly two-thirds of the fantasy season left; it’s a marathon, not a race!

Eno Benjamin is available in 90% of Yahoo Fantasy Football Leagues. However, that’s all about to change. The Arizona Cardinals could be without James Conner for a short time. He landed on the football with considerable force and sustained a rib injury. Conner does have a history of chest injuries, so it wouldn’t be surprising to see the Cardinals hold him out for multiple weeks if necessary. The assumption is that this ailment isn’t serious and shouldn’t keep Conner out for too long.

However, the Cardinals also lost Darrel Williams in Week five, which opens a big door for Eno Benjamin for Week six and potentially Week seven. The Cardinals travel to Seattle this upcoming week to take on the Seahawks, who have allowed the 5th most fantasy points to the RB position. It’s a great matchup, and with Conner and Williams both likely out for week 6, it makes Benjamin a must-own player as we enter the first bye-week threshold.

Eno Benjamin ties the game in the desert ‼️ @EnoB

Ken Walker is available in 55% of Yahoo Fantasy Football Leagues. It’s highly unlikely he’s available in any of your keeper or dynasty leagues, but he should be 1000% owned in every format after week 5. Rashaad Penny left Week Five with a Fractured Fibula and is projected to be out for the rest of the season.

That’s a tough blow to the Seahawks and Penny’s fantasy owners. Walker now steps into a huge increase in volume and share of the rushing offense. Seattle used considerable draft stock on Walker, so fans and fantasy owners should be excited that the rookie is going to be let off the leash a bit. Ken Walker should be a huge target on the Waiver Wire; I would urge you to be as aggressive as possible when trying to add him.

Over the past decade, a rookie RB has finished top-15 every season.

Ken Walker III is about to join them. 😈

Alec Pierce has slowly crept into fantasy relevancy across the past three weeks and has done enough to warrant ownership. Pierce is owned in just 8% of yahoo fantasy leagues; he’s likely available in the majority of redraft formats. He’s hauled in a combined 12 catches for 161 receiving yards in his previous two games. This is on an offense that’s been less than desirable with the absence of Jonathan Taylor, which further highlights poor QB play.

To be fair, Matt Ryan and the Colts did take on a solid Denver defense on a short week; maybe we’re being too hard on the old man. Nevertheless, tough times breed tough players, and Pierce fits the mold of a “Go-To” target when you’re battling in the trenches. Ryan was targeting Pierce often last game (9), and even in tight windows. He and the rookie were showing chemistry that I’m willing to pay up for on the waiver wire. This offense needs another consistent receiver to step up; Pierce will be that guy!

Josh Reynolds has emerged as the second-best pass catcher for the Detroit Lions, even exceeding TJ Hockenson. The two have the same amount of targets (34), but yet Reynolds has over a hundred additional receiving yards as he’s been utilized as Detroit’s downfield threat. Reynolds and Goff are clicking, and this is a definite buy scenario based on his production thus far. Rip the unfriendly brandless name off the back of the jersey and take a hard look at his numbers thus far.

Hey, I get it, I’m not excited about this either, but it’s happening. Tevin Coleman is officially a buy candidate for those hungry to fill an RB position for a week or two. The keyword is Hungry! You shouldn’t over-extend yourself with Coleman if you already have 3-4 solid options at your RB and Flex positions. However, Coleman might be your consolation prize when attempting to land Eno Benjamin or Ken Walker; you’ll want to be sure to get him in the waiver queue or make a similar correlation in your bids to those top RBs backed up with some value placed on Coleman.

Coleman looked like one of the better RB weapons from the 49ers this season. He was explosive off the ball, and similarly to Pierce, he was looked to when the team’s top target was sheltered by the opposing defense. He finished Week 5 with 11 total touches for 67 yards with one rushing and one receiving touchdown; super impressive, considering he barely played a snap all season. You know the drill, it’s a 49er running back with perceivable volume; flee to him, but don’t be too desperate. He’s owned in 0% of leagues, but you know the SF running and Shanahan narratives will be enough to juice his waiver cost.

The Tight End position in Fantasy Football is in full aggravation mode. There are few targets we can truly trust to get us a good night’s rest. Luckily for you, Hayden Hurst is owned in just 30% of Yahoo Fantasy Football leagues. This is comical, considering he’s now TE10 after Week 5. That’s just how up and down the position has been. I don’t want to overspend on a TE, but if you’re hurting with bye weeks or injuries, Hurst could be a nice bump for you.

Tee Higgins is dealing with a sprained ankle, and that could negate his play in the short term, even when returning. Not saying Hurst is going to explode as a Mark Andrews-Level Threat (MALT) to defenses, but his modest target share could grow even more in weeks six and seven. Hurst has 7+ targets in four of five games and has touchdowns in back-to-back games. 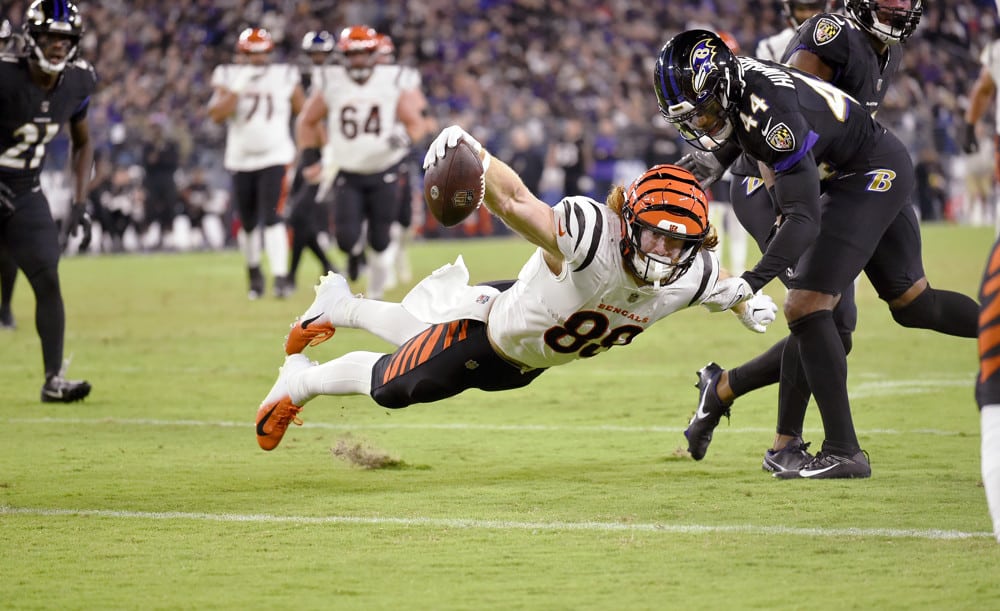 I cannot, in good nature, recommend that anyone spend an exuberant amount of FAAB on Taysom Hill. He’s a complete disruptor to the fantasy market, and I only advise going after him if your roster health is not only spectacular but has 2+ available spots. Taysom Hill earned well over 30 fantasy points in most leagues Sunday. However, he combined for 0.80 points in Weeks 2 and three. Half the nature of Fantasy Football is taking calculating gambles, be my guest to spend more; he’s the TE3. I’m willing to take wagers he won’t hold that position.

Deon Jackson was another bright spot for the Colts despite the dismal TNF performance. Jackson totaled 17 touches for 91 yards. He rushed the ball 13 times for 62 yards and caught all four of his targets for 29 yards. Jackson is very buyable, with Nyheim Hines going down with a concussion and Jonathan Taylor returning from injury. I like stashing him on my bench, regardless. Jackson performed well in the preseason and looked much better than Lindsay in week 5. In my eyes, Jackson is the new handcuff target in Indianapolis.

Khalil Shakir busted out for a big day on Sunday, reaching 75 receiving yards on just three catches plus a touchdown. Shakir looked good as the WR3 for the Bills in the absence of Jameson Crowder and Isaiah Mackenzie. Shakir received five targets and was used as a deep threat. While the WR pool will continue to run deep throughout the year, I’m still willing to spend a fair little chunk of FAAB on Shakir to ride out any short-term injuries or bye weeks. Shakir is also worth a stash to non-desperate fantasy managers; Shakir has shown he can be relied on if this offense were to experience another injury at WR.