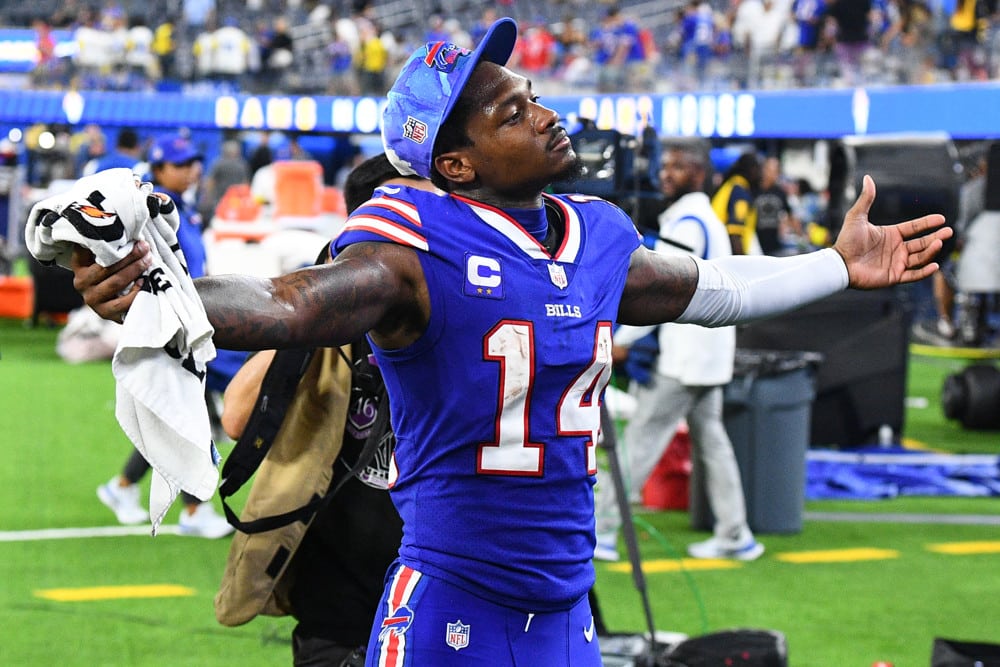 Welcome to the Sports Gambling Podcast Network’s Top 10 DFS stacks article!! Each week of the NFL season, I will be breaking down the DraftKings main slate to bring you the top 10 DFS stacks.

“Stacks” in DFS can be defined as; playing two or more players from the same team in a single lineup. Stacking in DFS contests has become the predominant roster construction strategy, particularly for GPP tournaments, with various unique and creative ways to build stacks and maximize your scoring upside each week.

The most popular stacking options include the skinny stack, the double-stack, the run-back stack, the full-on game stack, and the running back paired with a defense stack.

A game stack can include up to five players from a single contest and a 3/2 or 4/1 team ratio, typically involving the quarterback. The running back stacked with defense is just that.

Each week the stacks in the top 10 will include a variety of these stacks based on the scoring upside and likelihood of cashing in GPP tournaments and cash games.

Josh Allen is a grown-ass man. I believe that’s called analytics as well. His eight total touchdowns leads all NFL quarterbacks. He trails only behind Lamar Jackson in DraftKings points at the quarterback position. The two defenses he went against last year won the Super Bowl and were the number one seed in the AFC. This offense is legit. These prices are a steal.

Stefon Diggs is the number one wide receiver in DraftKings points and is currently the fifth most expensive wide receiver at $7,700. For perspective, he’s $2,200 cheaper than Cooper Kupp, who has seven fewer points. You are paying up for Josh Allen at $8,200, but you gain leverage if you add Diggs to the stack.

Tyreek Hill has scored the third most DraftKings points at the wide receiver position. He’s currently the sixth most expensive wide receiver at $7,300. Tyreek Hill has looked just as explosive as Tyreek Hill. Last week he torched the Baltimore Ravens quarterbacks for two touchdowns. This is the last week you’re going to give him under $8,000. Adding him to this stack further differentiates you from the field and provides you with one of the most explosive pairings on the DraftKings Main Slate.

Thankfully the Minnesota Vikings vs. Detroit Lions matchup is at 1 p.m. this coming Sunday. We don’t have to worry about the dreaded Primetime Kirk Cousins curse this week. Through two weeks, the Detroit Lions secondary has given up 580 passing yards and three receiving touchdowns to wide receivers. Cousins is 69% better in non-primetime games. To quote a personal hero of mine Ron Burgandy, “It’s science.”

Enter Justin Jefferson, currently fifth in the NFL in receiving yards with 232 and sixth in DraftKings points with 53.2. Last season Jefferson caught 18 of 22 passes for 306 yards and 61 total DraftKings points. According to PFF, he has a top 5 cornerback matchup this week and should see ample opportunity just to be the highest-scoring wide receiver on the slate.

Interestingly enough, Amon-Ra St. Brown is currently the fourth leading scorer at the wide receiver position and is priced this week as the eighth highest at only $7,200. He’s currently coming in at 17 % rostership, which is the highest on the wide receiver position. Jefferson is only coming it at 8% rostership, which makes this run-back stack a little expensive, which I like because it means not a lot of people will be on it.

I hope everybody had time to delete all those Tua Tweets from earlier this summer. If not, you should make a beeline to your Twitter account to make sure you are on the right side of history. Speaking of the right side, have you seen the video of Tua throwing inverted, like he was a right-handed quarterback? It’s mind-blowing.

Last week I said at NimblewNumbers.com that Tua was the Slate-breaking Milly-making winning quarterback for Week 2. This week he’s underpriced and in a potential shootout with the highest total this week at 52.5. it would be foolish not to be loaded up with 2 when he has Hill and Jaylen waddle, and Mike Gesicki as his weapons.

Stefon Diggs leads all NFL wide receivers in points and is priced under $8,000. This makes absolutely no sense, and until DraftKings adjust the ranks, I want a hundred percent of Stefon Diggs in my lineups 69% of the time, every time. And in this scenario, who doesn’t want to play Tyreek Hill with Stefon Diggs? Losers, that’s who.

Turning adversity into an opportunity. 💪

Hear from Coach and @Tua after our Week 2 comeback victory in Baltimore! 🗣 #FinsUp pic.twitter.com/2cr9PnpLOQ

Rookie Commander’s wide receiver Jahan Dotson has three touchdowns in two games in his early NFL career. The commanders are + 6.5 underdogs in this matchup against the Philadelphia Eagles. Carson Wentz is going to be throwing the football a lot in this matchup. At only $4,200, I’d don’t understand the pricing that DraftKings is rolling out this week. Good thing we don’t need to understand DraftKings. We just need to understand winning GPP plays.

Jalen Hurts on facing former Eagles teammate Carson Wentz this week: "It's definitely a mutual respect between the two of us"https://t.co/DJG5eZT8pM pic.twitter.com/6wJrp4SClZ

Lamar Jackson is the third leading scorer on DraftKings with 69 points through the first two weeks. Jackson is tied for first in the NFL amongst quarterbacks with seven total touchdowns. He ranks second in rushing yards, behind only Jalen Hurts, with 136. Lamar Jackson has himself a TE1 in Mark Andrews, and it doesn’t hurt his weekly upside that Rashod Bateman is blossoming into a reliable wide receiving target.

The cherry on top is at the Baltimore Raven’s defense right now. He’s struggling at the cornerback position, starting with Rookies, who got torched last week by Tyreek Hill for two long touchdowns. Through two weeks, the Ravens’ secondary has given up over 580 yards passing and five touchdowns.

The New England offense is not a juggernaut, but they’re going to need to throw the ball in this matchup end runback of Nelson Agholor is cheap, and with Jacoby Meyers missing practice twice could be a really differentiated your play in a GPP tournament.

I was wrong about Carson Wentz. But I’m not alone. The overall narrative on Twitter and in the sports Community was a Carson Wentz was washed. And an Indianapolis ran him out of town because he ruined their chances at a playoff surge last year. Two games into the regular season, and the perspective is a little bit clear the Indianapolis Colts are falling apart at the seams right now and has nothing to do with Carson Wentz.

Washington Wentz leads the league in touchdown passes with seven through two weeks. He is second in the NFL with passing yards 650. And he has 64 DraftKings points, making him the third-highest-scoring quarterback. His price has been bumped up to $6,300, but it’s still a value given the high-volume passing offense at Washington.

Curtis Samuel Leads the Commanders in targets, receptions, receiving yards, and fantasy points. This week Samuel is priced up to $5,100. Don’t let that scare you away from the Commander’s most lethal weapon on offense. Ron Rivera knows what he has in Samuel coming from Carolina. He’s in the exact same role. I’m comfortable rolling this stack out in medium-sized GPP tournaments and also in smaller field tournaments.

My podcast partner at Chalk Blocked, Bo McBrayer, is high on the Falcons onslaught stack this week. Marcus Mariota is averaging 18.6 DraftKings points on the young season. His 88 rushing yards rank third behind only Jalen Hurts and Lamar Jackson. At only $5,500, he’s a pay-down dual-threat quarterback option with a rushing touchdown upside.

Mariota’s weapons are cheap too. Drake ($5,800) and Kyle Pitts ($4,800) can be stacked for only $10,600 or $700, more expensive than Cooper Kupp. The Falcons had surprised through the first two weeks, ranking ninth in points scored, averaging 26.5 points per game. The Seattle Seahawks are not a good defensive team and have already given up over 300 receiving yards to wide receivers.

London’s 24.6 DraftKings points last week put the NFL on notice that the rookie had arrived. Now, if only Pitts can get jump-started. This is the week. As Denny Carter says, have faith and trust the process.

Matthew Stafford bounced back last week, scoring over 20 DraftKings points and propping up Cooper Kupp with his second 30-plus point performance in back-to-back weeks. The 48.5 total is the fourth highest on the 13-games DraftKings main slate. Vegas is expecting this game to shout out.

Last season Kupp racked up the receptions against the Cardinals, catching 18 passes for 187 yards and a touchdown. According to PFF, Kupp has a top 5 cornerback matchup this week. Through two games, the Cardinals secondary has given up over 300 passing yards and two touchdowns to wide receivers. Don’t let cups price scare you away. He’s a solid floor play every week.

Zach Ertz is currently the fifth leading tight-end DraftKings tight-end, averaging 13.4 points per game. He’s seen 15 targets the first two weeks of the season and is second only to Marquise Brown’s 17. Expect Ertz to be highly involved in a game script that more than likely will be coming from behind. I’m comfortable rolling this stack out in smaller GPP tournaments and Cash games.

Through the first two games of the season, Joe Flacco has over 100 passing attempts. He’s averaging 51.5 passing attempts per game. That is a hell of a lot of opportunity for cheap low-price wide receivers with a terrible defense who, you know, we’re going to have to throw the football just to stay in the game. And how the last week they won the game against Cleveland.

Joe Mixon has had two solid back-to-back weeks to start the season. He’s seen 59 opportunities through two games, including 13 targets. The New York Jets have already given up 187 rushing yards and three touchdowns. Mixon is a sleeping giant this week.

My partner at the Fantasy Millionaires, Mike “Cash” Collins, is all over Joe Burrow and Tee Higgins this week. Burrow has had a rough start to his 2022 NFL season. Unfortunately, he’s lost games to Mitch Trubisky and Cooper rush. He faces Joe Flacco in Week 3. This is Joe Burrow’s Super Bowl, folks. And thank God Tee Higgins is Batman coming to save his Gotham City.

Higgins looked great last week, returning from a Week 1 concussion. He caught six of 11 targets for 71 yards and hauled in a touchdown. Higgins’s rate is $2,000 less than Ja’Marr Chase’s. A notable steal given the production upside in this matchup. The Jets have already surrendered 238 receiving yards and four touchdowns to wide receivers in two games. Joe Burrow should be just fine.

Running it back with any of the cheap New York Jets wide receivers makes too much sense. Garrett Wilson is the most expensive at $5,400. This week, Elijah Moore’s price is $400 less, making him the value play. Both wide receivers are currently picking up rostership percentages under 4%, making them optimal runback options in this stack.

Tee Higgins and Ja'Marr Chase have run 483 routes together.

Here's their split on those routes: