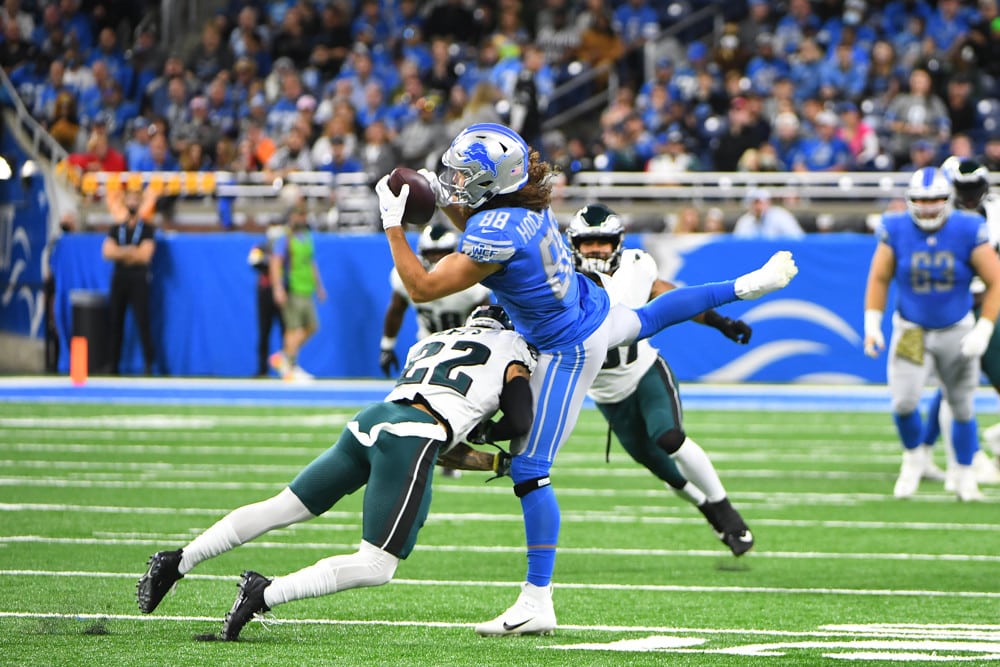 It was an exciting kickoff to the 2022 season, but now it’s down to business. And on to our first Week 2 IDP Rankings risers, fallers, pros, and regular Joes. Covering NFL locker room reports and any scenario changes. Or just passing on some of the in-house rumor reports by the locals. Whatever it is. If it’s NFL defensive player related, and could change the game somehow. It’s worth talking about.

Eagles Strong Safety Marcus Epps showed up just like we expected. And wow, did he. Leading all Philidilpha defensive players in IDP points and the only starter to see 100% of the snaps. From unknown to some to right into the middle of the fantasy football waiver wire fire. And straight up, the Week 2 IDP Fantasy Rankings.

Epps snuck in a little bit under the radar last season. Quietly getting the job done with no fantasy fan fair. And more importantly, and even to my amazement. Apparently. This coaching staff loves Epps even more than I thought from what I saw in previous reports.

Epps had ten combined tackles, with eight of them solo versus the Lions. Was he perfect? No, not really. But it was clear why the staff let him fly all over the field the entire game. Epp’s effort in the past worked his way into this starting gig last year. He also defended it as the favorite to start this past summer. After the Eagles brought in former 49ers veteran Jaquiski Tartt, just to release him later.

So, taking a stab at it. It seems like the team didn’t really try and bring in any real competitors, now that we think about it. He’s a Tier 1 Safety option if you’re looking. Because if they believe. We believe in potential production at any level. Especially anyone that could possibly land as the team’s best IDP play based on playing time.

So, just how big of an under-the-radar signing was it? Because right now. Signing former first-rounder and retreated defensive lineman Charles Harris last offseason. And then handing him a nice but modest contract to a then four-year vet who’s not panned out anywhere else. Is really making the Lions look pretty smart.

Harris had a nice quiet breakout last season. With 65 combined, 7.5 sacks, and did it all with a passing grade. But entering this season, even after the nice payday. All eyes were shifted to rookie first-rounder Aidan Hutchinson. And certainly, with good reason. But now, after the first game, we hand Hutchison a rookie pass. Because we know it’ll get better. And put all our focus on Harris.

As for Charles Harris, he shoots up in the deeper Week 2 IDP rankings and waiver wire lists this week, or should. He lit it up versus the Eagles, who’s been known to be generous off the edge, to kick things off. Recording 7 combined and one tackle for a loss with 83% of the snaps. And noting, that’s to Hutchison’s 90% and 1 assist total.

Knowing of, tracking, and actually using Harris in deeper formats last season. There’s one thing I can take stab at; he’s set his ceiling. And although he was consistent in living up to the weekly matchups last season. His limited sample of sack production-related stats caps off more like a DL2 box score option so far.

It’s amazing how inside linebacker Jordan Hicks always comes up just short in respect. This past season he signed with the Vikings and automatically plummeted down draft boards. The season before, reportedly, the rookie Zach Collins was threatening his job. Hence, Hicks sunk in IDP rankings. And even the season before that. De’Vondre Campbell was signed after a couple of stellar seasons with the Falcons. And instantly, Jordan Hicks took the hit.

This is how that worked out since 2019 when all this doubt and fading started. He’s landed top at least like a 20 ILB with triple-digit combined tackles to show for it each year. And now, as we’ve mentioned him in our articles and IDPro Players Podcast over the summer. He led the Vikings in IDP production versus the Packers in the first week of the season. And assuming now his veteran presents in fantasy football has him on most Week 2 IDP rankings as a riser. And waiver wire, darling, for sure.

No snap judgment either thrown the other way. Game flow, as well as anything, accounted for linebacker Eric Kendrick’s poor production. And instead, it was Jordan Hicks lighting it up this round. Which could happen again, but could be the other way around too. Or even end up splitting any inside production right down the middle at times. This leaves the question. Can both really continue their triple-digit career streaks playing side by side?

We’re putting IDP managers on notice if they don’t know it. Because Steelers Edge Rushing Linebacker Alex Highsmith isn’t anywhere near an elite waiver wire pickup, nor should he get a huge boost in Week 2 IDP Rankings just because Edge Rushing Star T.J. Watt is out now.

For one, Highsmith overachieved versus the Bengals in week 1. He’s always been a solid, but average-graded and the occasional IDP-productive guy. So recording three sacks again, or even all the tackles, or thinking it’ll all happen again. Really isn’t realistic at all. What Highsmith had this past weekend was a one-in-a-season game. At least if the Bengal’s O line doesn’t get any better by their next game.

He overachieved, thanks partly to the struggling Bengals offensive line, as we mentioned. And superstars T.J. Watt and Cameron Heyward both demanded their own double teams during the game, which didn’t work either, stopping them either. Even the inside linebacker Myles Jack got a piece of the pie, recording one. In this case, it just happen Highsmith got a larger piece than the others.

All I got to add is what I know from the time before when Highsmith had the chance and Watt couldn’t play for a stretch. No matter the matchup, he was just a guy that struggled with consistency. Hence his eight sacks in a three-year career reflect hard on his history of being an average LB3/DL2 depth piece. And if he’s a free agent in my league, for my fellow manager’s sake, I’ll appreciate the waiver wire distraction while I look elsewhere.

The Cardinals ILB third year ILB Isaiah Simmons, had three combined tackles in week 1. He was also outproduced by Zaven Collins, which was reportedly in the dog house just a few weeks ago. And even rumored to have lost the starting gig at one point to Nick Vigil. And I can tell you that Simmons’s box score stings deep. He’s landed somewhere around 290th in production in my flagship league. And that effect might have him on the verge of dropping like a rock in a lot of Week 2 IDP Rankings this week.

To be honest, we shouldn’t exactly be completely shocked after watching. Simmons has had his struggles before stopping the run. And expected to cover a lot of the slot, besides covering the Chiefs All-Pro Tight End Travis Kelce. We all know Kelce would have had a great game against whoever covered him with fresh legs in the first game of the year.

All defensive coordinators are adjusting everything the first few weeks of the season. So, that’s a plus. But the real problem is trusting Simmons will bounce back sooner rather than later. But in any case, we’ll likely find out this week anyhow. The Cardinals face the Raiders, and we all know TE Darren Waller is pretty good at football. In shallower formats, we need to know early if our high draft stock guy is a bust. Or way short of the mark, see we can move on. Despite the player’s “name.”

The real question right now is, I wonder if that one guy in my league is still interested in trading me for Simmons or not because I’m really starting to question if it’s really going to be worth waiting to find out.