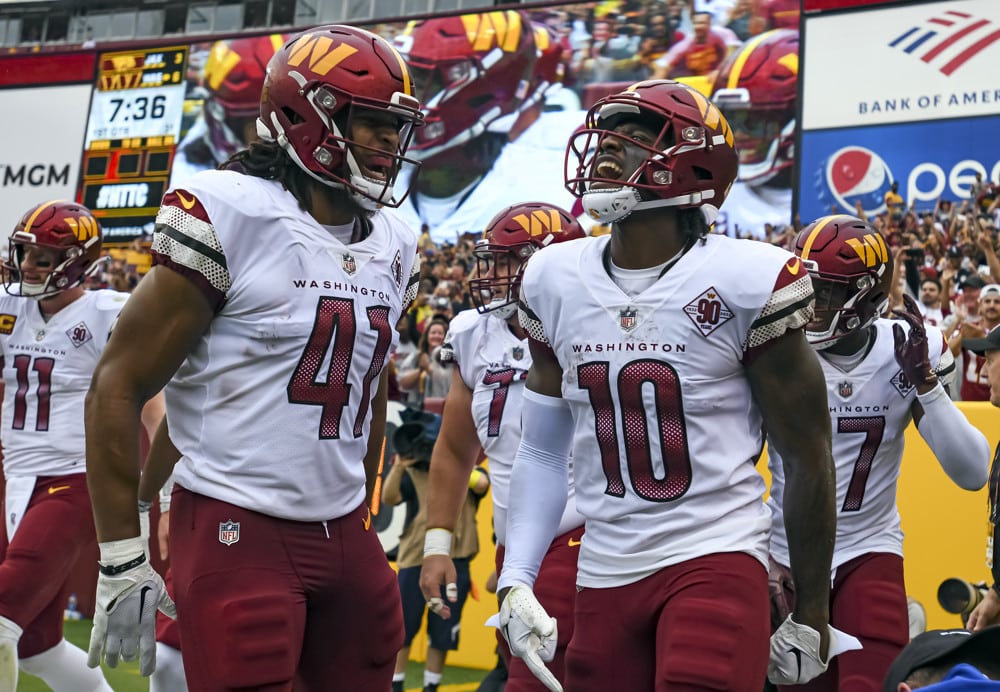 LANDOVER, MD – SEPTEMBER 11: Washington Commanders wide receiver Curtis Samuel (10) celebrates a touchdown with running back Jonathan Williams (41) during the NFL game between the Jacksonville Jaguars and the Washington Commanders on September 11, 2022 at Fed Ex Field in Landover, MD. (Photo by Mark Goldman/Icon Sportswire)

Week 1 in the NFL was a wild and serendipitous roller coaster that took my breath away, but perhaps not for the best reasons. While I was captivated by the return of football, I, like many, have been hit with key player injuries. In addition to injuries we must also account for poor production from key players and see where we can make up ground from available emerging talent off the waiver wire.

There will always be talent left over after you’re league has gone through the FAAB Bidding Period. This article will include players you’ll need to pay for and players that can land in your lap for free. It’s early in the season; you want to budget your FAAB appropriately to put you in a good position week in and week out.

You will hear no recommendation to overbuy a player or spend more than 25% on a particular player; there was some booming production in Week 1, but nobody did enough to earn more than 25% of your total budget. Let us hear your Waiver Wire and FAAB Questions in the SGPN Discord; we’re always talking Fantasy!

Curtis Samuel splashed in week 1, collecting eight of 11 targets with 55 reception yards. The yardage should certainly be better with that target share, but the volume tied for the 11th most in week 1. Carson Wentz spread the ball around, completing at least three passes to 5+ receivers, but Samuel caught the eye of Wentz early and often.

Terry McLaurin was held to just two catches but did find the endzone. It should also be noted that McLaurin finished with more yardage than Samuel, with six fewer catches. I don’t expect Samuel to maintain this volume week to week, but he should be owned and could be a key lineup replacement for an injured player like Keenan Allen or a Week 1 dud like Davante Parker.

Jeff Wilson is an add based on the injury to Eli Mitchell. Mitchell was someone I was very high on this season, and he looked great before getting hurt. It would appear Mitchell will be out for the foreseeable future, hearing two months at a minimum. Enter stage right, Jeff Wilson. Wilson had a bleak Week 1 outing, rushing for 22 yards on nine attempts while adding in a pair of receptions.

Certainly not production you’d buy any other week, but Wilson is now the #1 RB on the 49ers depth chart, and we have to take that seriously. Jordan Mason and Tyrion Davis-Price will duel for the #2 spot here. Wilson will be a touchdown-dependent flex option until he shows us some bursts and consistent stat lines. Mason is also a free waiver (0%) option, while Davis-Price is a low percentage target (1-5%)

Dontrell Hilliard isn’t a target as an overreaction to Derrick Henry‘s poor play, but rather an example of misevaluation of the Titan’s offense. Tennessee production totals we’re quite surprising, you had Hilliard catch two touchdowns and rookie Kyle Phillips leading the team with six receptions.

Hilliard was already a late-round handcuff target to ensure roster utility for Derrick Henry owners. Now his value elevates far higher as he clearly will have a role in this offense. Hilliard is a costly stash play; he only played 18% of the snaps in Week 1, but with Henry’s injury history and poor production to enter the season, he feels safe at this cost.

Robbie Anderson and the Carolina Panthers had a very up-and-down week 1, but overall both the team and Anderson left with positive notes. Anderson would finish week 1 with 102 reception yards on five catches. Anderson was targeted eight times but made his day on a 75-yard reception for a touchdown. Outside of that play, he recorded four catches on seven targets for 27 yards.

The Panthers missed key production from DJ Moore and Christian McCaffrey, and I expect those two to progress in week 2, making Anderson a boom or bust candidate. Anderson and Baker could build on this performance or easily regress. He’s more of a gamble based on years past, but week 1 should give us more trust to roster Anderson in hopes his production becomes more consistent.

Devin Duvernay was impressive in his limited playing time in week 1. Duvernay played just 52% of the snaps but was able to haul in four of four targets for 55 receptions yards plus two touchdowns. Duvernay and Lamar Jackson looked in sync, and that wasn’t consistent with the other pass catchers.

Isiah Likely missed all four of his targets, Rashod Bateman missed three of his five targets, and Mark Andrews missed a few as well. This is Duvernay’s third season with the Ravens, he’s been around Jackson for some time, and they’ve clearly built a rapport; look for him to be used more in week two as a reward for his week one production.

DeAndre Carter looked really good in week one while filling in for Keenan Allen. Carter was able to find the endzone and looked comfortable playing with Justin Herbert. It’s uncertain how long Allen will be out, but he’ll definitely be gone for this upcoming week against the Chiefs on Thursday Night. Carter will play a lot more in week 2; he only registered 37% of the total snaps in Week 1.

Carter had at least seven fantasy points in five of six games last season where he played more than 65% of snaps for the Washington Commanders. He would score three touchdowns in those six games as well. He’s a seven-year vet with plenty left in the tank, I’m willing to roll him out in a boom or bust scenario for Thursday Night Football.

Kyle Phillips is a deep stash on your bench, or a viable deep league buy option. Phillips led the Titans in receptions and receiving yards with six catches and 66 receiving yards. Phillips played just 31 of 65 snaps; he did, however, receive nine targets. That’s nearly a target in one out of every three snaps played. Phillips was an exciting training camp story as he wowed teammates and beat reporters with great efforts through drills and scrimmages. We should expect more from Robert Woods next week, but Phillips will become unbuyable if he repeats this production. You can target him for the cheap; in many leagues, he can be added for free.

Hayden Hurst received eight targets in week one and hauled in five catches with 46 receiving yards. It wasn’t overly impressive, but he did tie his career high for targets in a game. Tee Higgins could miss time, making Hurst a more valuable option in an offense that will throw the ball consistently. Hurst was on the field for 75% of the snaps. He’s a live streaming option based on his production this past week and the potentially available production with Higgins limited. You shouldn’t overspend on Hurst. He’s another option you can likely land for free.

Zay Jones was a pleasant surprise this past Sunday. He received nine targets and collected six passes with 65 reception yards. He also played a lot of snaps, clocking 83% of the offensive snaps. Despite not collecting a touchdown, he was targeted in the end zone. Jacksonville will produce a lot of positive game scripts for their receivers based on the poor play on defense and a weak offensive line that doesn’t allow the run game to flourish. This production feels safe going forward. He’s a player that will fly under the radar or not seem as buyable playing for the Jaguars. I would be willing to toss him 2% of FAAB, but he can be landed at no cost in many leagues.