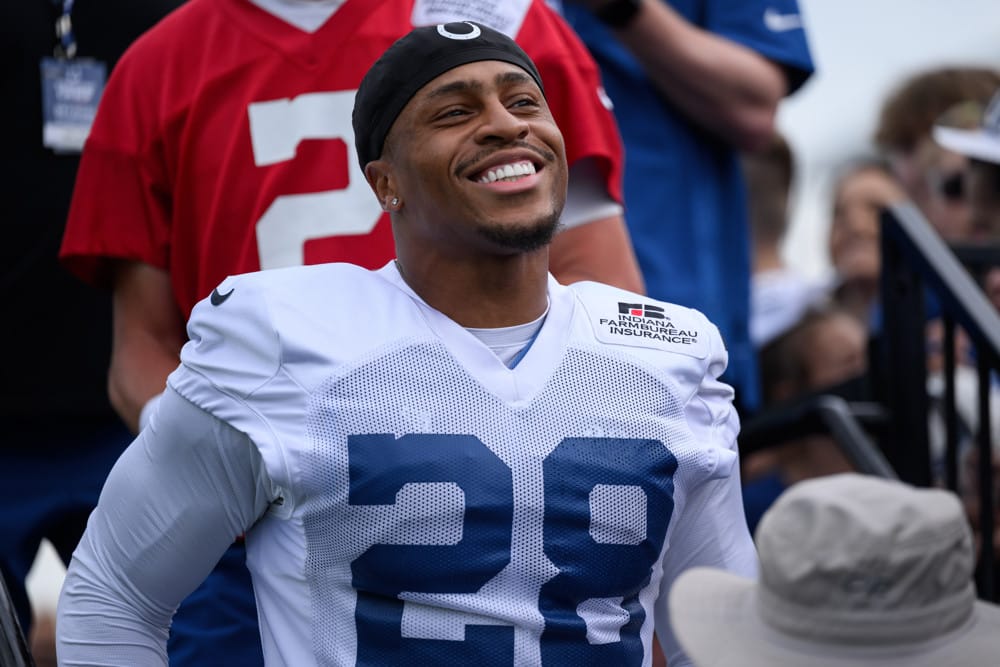 WESTFIELD, IN – JULY 30: Indianapolis Colts running back Jonathan Taylor (28) goes up into the stands during the Indianapolis Colts Training Camp practice on July 30, 2022 at Grand Park Sports Campus in Westfield, IN. (Photo by Zach Bolinger/Icon Sportswire)

Fantasy football auction drafts are different than your snake drafts because you can specifically get the player you want, as long as you’re willing to spend. In fact, you could go for your top two players, as long as you shell out the money that it may cost to get them. Auction drafts are so different than snake drafts and add another layer of strategy when you try to fill your team with only a $200 draft budget. The following fantasy football auction cheat sheets show the average projected draft value of players in a 12-team league with a $200 budget. The auction prices also make the rankings slightly different. Since these are compiled from averages that have been spent, you can start to see which players are going above, or below, their current average draft position in a snake draft.

If you’re familiar with fantasy football, then you know standard scoring has most of the settings at the very basic. No points for a reception, and normally no bonuses or frills on top of it. The players that are more known for punching the ball in around the end zone become more valuable than those that catch a lot of small passes. In standard scoring, after last year’s 18 touchdowns, Jonathan Taylor is averaging $79, a full $14 more than the next highest player, Derrick Henry.

In half-PPR scoring, players get half a point for each reception. This is a step above standard in scoring while not fully going to one point per reception. In this format, Jonathan Taylor tops the list again. He’s nine dollars more than the next highest player, Christian McCaffrey. While Taylor tops all lists, the difference is in what people are willing to spend. In half-ppr leagues Taylor is going for $70. That’s less than his price in standard scoring, but more than his price in a full-ppr league.

As one of the more popular scoring types now, a points per reception league gives players one point for each catch they make. PPR scoring still finds Jonathan Taylor at the top, but he’s tight in price with Christian McCaffrey. We also see players like Derrick Henry, who was second in standard but doesn’t catch many passes, fall down the board quite a bit. You will also see backup running backs who are known for their fantasy football impacts by catching some passes during the game drastically fall down the charts in dollar amounts.

The SGPN Cheat Sheets are your draft guide and mentor. You can print out the PDF version of the cheat sheet for quick reference during your live or online draft. We’ve also provided a google sheet version that you can easily review. The auction differs a little as it only contains players currently going for an average of $1 or more. It is also ranked by dollar amounts, rather than SGPN ranking systems.