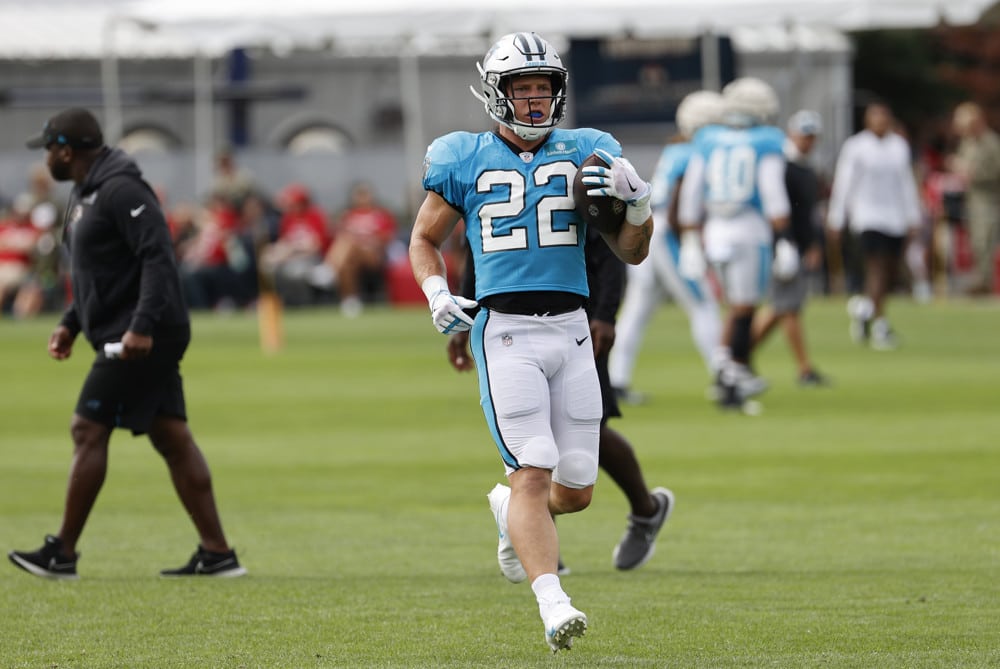 FOXBOROUGH, MA – AUGUST 17: Carolina Panthers running back Christian McCaffrey (22) during a joint practice between the New England Patriots and the Carolina Panthers on August 17, 2022, at the Patriots Practice Facility at Gillette Stadium in Foxborough, Massachusetts. (Photo by Fred Kfoury III/Icon Sportswire)

The SGPN Fantasy Football podcast “Old-Fashioned Football” held its first annual fantasy football auction draft. Being Dubbed “Old-Fashioned Football Presents The Bourbon Bowl”, co-hosts Justin and Miranda Mark drafted with ten other SGPN listeners and contributors. For several participants, this was their first fantasy football auction draft. Some even came away from the draft ready to ditch snake drafts and compete in only auction leagues due to the fun. But which players went higher than expected? What surprises were there? Like most auction drafts I’ve been a part of, there are always surprises and players valued over their projected dollar amount. Let’s take a look at some of the more note-worthy results.

Here’s a chart showing what last year’s Top-10 running backs in a PPR went for this year.

As expected, the top three from last year brought in a lot of money. In fact, over a fourth of the $200 budget went to get one of these top three. Christian McCaffrey went for the second highest at $60 in hopes that he can stay healthy.

After that, fourth-ranked Joe Mixon brought $43, and then eighth-ranked Alvin Kamara was $39. If Elliott, Patterson, or Gibson finished anywhere near the top 10, they will be steals. What this tells me is that if you plan on getting a top running back in your fantasy football auction draft, be prepared to pay.

Running Back Steals and Undervalued

Josh Jacobs isn’t exactly an RB1, but he’s consistently put up RB2 numbers. In the SGPN fantasy football auction draft, he went for only eight dollars. The Eagles backfield is expected to be led by Miles Sanders, who only went for three dollars. However, the most undervalued running back and perhaps a steal in the draft at running back was Cordarrelle Patterson.

Patterson, who finished 9th last year, is still expected to be involved in the offensive game plan this year. Sure, the Falcons drafted Travis Allgeier, but all reports show that Patterson remains the starter. Not only is he a very talented back, but he’s also played wide receiver, tight end, running back, and kick returner. His ability to play all over the field only makes him more valuable, even if he doesn’t catch as many touchdown receptions this year.

Top wide receivers don’t end up costing you as much as top running backs. That’s partly because there’s more depth at the position. On average, teams spent only $50 on their top two wide receivers. This should show you that you don’t have to go crazy on wide receiver and should feel comfortable spending a good chunk on your running back. Let’s take a look at the top wide receivers from last year.

Here’s a chart showing what last year’s Top-10 wide receivers in a PPR went for this year.

As you can see, different from the running backs, the wide receivers’ value, aside from the top handful, really starts to drop. Kupp, Adams, Jefferson, and Diggs all go for over $50, and Chase is close at $44. Then the prices start dropping. AJ Brown, who moves to a new team with Philadelphia, brought in $36. Surprisingly enough, Davante Adams has gone for more money this year on his new team than he did last year.

Apparently, there is more faith that Derek Carr will get him more involved than Aaron Rodgers did. Other receivers bringing in a good chunk of change include Keenan Allen ($32), CeeDee Lamb ($31), Mike Williams ($24), and Courtland Sutton ($23). Skyy Moore was the most expensive rookie receiver at $11. This should help you plan your fantasy football auction draft, seeing what receivers are going for in a 12-team league.

Plenty of former big-name receivers went for low prices and could end up being a steal. Amon-Ra St. Brown had a pretty good rookie year and went for only eight dollars. Chris Godwin, DK Metcalf, Adam Thielen, DeAndre Hopkins, and Tyler Lockett all went for six dollars. Brandin Cooks has shown to be a PPR machine in previous years and only went for $19. The two biggest steals, in my opinion, though, were Diontae Johnson and Michael Thomas, and they both went to the same team. Credit SGPN contributor Cody Zeeb for getting Pittsburgh’s WR1 for only four dollars.

Some may find Mitchell Trubisky or Kenny Pickett a downgrade from Ben Roethlisberger. However, both will likely target their top wide receiver often. And if Michael Thomas can come back and return anywhere close to his previous form before his injuries, he was a steal at only eight dollars. I’ve seen both of these players go for lower amounts, so you can start to plan your fantasy football auction draft for bargains like them.

We talked on the Old-Fashioned Football Podcast about how grabbing an elite tight end can throw your budget off for other positions. However, it can be a position that makes or breaks you. Spending for the top tight ends didn’t seem to affect our teams. Let’s take a look at where the top tight ends went, and the players the teams were able to get after that.

Team A drafted Travis Kelce for $46. They were able to stack that team with Joe Mixon, Cam Akers, Tyreek Hill, Keenan Allen, and Mike Evans. Yes, the running back depth may be a little thin, but the main core of the team looks very strong. Just don’t tell @JMarksWifey I’m complimenting her team.

Team B drafted Kyle Pitts for $28. We already talked about their ability to get great value at wide receiver. Along with Pitts, they drafted a stacked team with Derrick Henry, Dalvin Cook, Diontae Johnson, Michael Pittman, Michael Thomas, and Cordarelle Patterson. This is definitely a team that will be tough to face.

Team C, which was me, drafted Mark Andrews for $31. Andrews was my top tight end target, so I didn’t back down when drafting. Still, I felt good about my team after spending for Lamar Jackson, Alvin Kamara, Najee Harris, JuJu Smith-Schuster, Rashod Bateman, and Adam Thielen.

Perhaps the biggest tight-end steal was Dawson Knox at only three dollars. Knox has been undervalued in all but one fantasy football auction draft that I’ve done this year. With O.J. Howard being cut today, there’s no reason he won’t be a valuable asset to Josh Allen again after he finished sixth in standard scoring and 11th in PPR scoring in 2021.

Depending on how your league drafts, quarterbacks outside the top five don’t tend to go for much. The biggest surprise to me was unproven Trey Lance going for $15. As you look at the fantasy football auction draft values from the top-ten quarterbacks from last year, you’ll see why that surprises me since he was tied for the fourth-highest dollar amount for a quarterback. This just drives home the point I made earlier. Plan to spend a good chunk of change for running backs, go after one of the top tight ends, and the rest can still fall in place nicely.

As you can see, outside of Allen, Herbert, and Mahomes, a top quarterback may not cost you much at all. Last year’s fifth-ranked quarterback went for three dollars. Yes, there is talk about his shoulder. However, I don’t think it’s going to affect him as much as we think. Stafford had back issues for years with the Lions and still put fantasy-relevant points on the board. Brady going for $11 seems like the biggest steal. After retiring and then un-retiring and coming back, this could be his last year. Do we really feel that a player like Tom Brady is going to go out with a bad year?

I think he has a bad taste in his mouth from last year and came back to prove he could get the job done at least once more, and that could be good for your fantasy football team. Not to mention he does have Mike Evans, Chris Godwin, and Julio Jones. While Godwin is coming off injury and Jones isn’t the same player he used to be, Brady tends to elevate both new and old players.

In conclusion, of the Old-Fashioned Football Podcast’s “Bourbon Bowl” fantasy football auction draft, you can get an idea of how your league may go. If you’ve played with your league mates for years, you’ll have a good idea of how they draft. However, if it’s a new league, this can be a bit of a guide on how it may go. Top-10 running backs go for a premium.

You can spend a good chunk of change on a tight end and still have a good-looking roster. You don’t have to go crazy on wide receivers because outside of the top five, there is good value to be found. And last, quarterbacks are under-valued outside the top five.