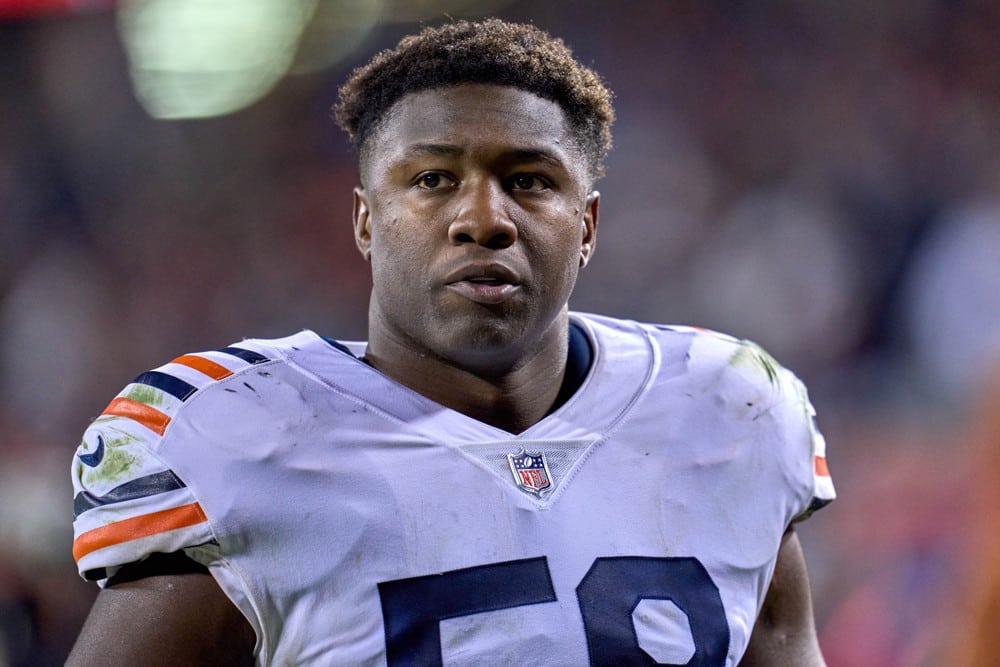 CHICAGO, IL – DECEMBER 20: Chicago Bears inside linebacker Roquan Smith (58) looks on during a game between the Chicago Bears and the Minnesota Vikings on December 20, 2021, at Soldier Field in Chicago, IL. (Photo by Robin Alam/Icon Sportswire)

These dynasty IDP rankings also target the majority of the balanced scoring formats, which has slowly become way more popular in the fantasy football community over the last eight or so years. And set the standard for most published rankings by any respectable site. But it’s always best to double-check that the rankings match your league’s format every time.

All-around Linebacker/Edge Rusher Micah Parsons played 84% of the snaps in 16 games. And averaged making a combined tackle every 10th snap but could improve on his missed tackles this season. Sent blitzing 114 times, hitting home 41% of the time with 13 sacks, and getting in the face of opposing QBs 33 times. Here may lie our future overall 2023 dynasty IDP rankings biggest hitter in terms of production ceilings.

All-around safety Xavier McKinney played 97% of the snaps in 17 games last season. Averaging making a combined tackle every 11th snap, with solid and less than a 10% missed tackle rate. Only targeted 56 times, allowing a solid 70% of those. The production vacuum alone here is hot. Production former 2022 starter Ryan Logan left behind is enough to think he’s a strong top 3 defensive back. And McKinney’s elite-like skillset doesn’t do anything but secure this dynasty ranking.

Defensive End Trey Hendrickson played 84% of the snaps in 16 games. And recorded on par defensive end combined tackle stats. But only sent blitzing nine times. And still recorded 14 sacks, 14 QB hits and applied pressure 45 times. Pound for pound, that’s the same version of what stud DL Max Crosby produced last season. But yet Crosby barely edged him out in most formats and had 208 more snaps than Hendrickson to do it in.

Linebacker Pete Werner only played 40% of the snaps in 15 2021 contests. So our high lights at less than a 2% tackle rate with a hot 4-game sample. A snapshot that included an average of nearly nine combined tackles a contest. With two outstanding performances and one elite-like game. The Saints apparently indeed have found their future defensive captain this time. It’s just a matter of a little more time until he completely takes over.

Linebacker/ Edge Rusher Jaelan Phillips had 54% of the snaps available in 17 games. In the process, Phillips recorded 42 combined and was credited with 8.5 sacks in his first year in the NFL. That’s above par for any rookie edge rusher. And puts him ahead of the curve going forward. Assuming he’s their primary pass rusher going forward and keeps developing.

Strong Safety Brandon Jones played 64% of the snaps in 15 games last season. Averaging a combined tackle every 8th snap played. And with an expected increase in time on the field at that type of rate at production. The volume alone opens up a DB1 tier heading into his third year. He will have to clean up his coverage a lot. And all those missed tackles if he wants to maintain his tier in 2023’s dynasty IDP rankings.

A recent fall from grace in camp has Collins falling hard in our dynasty IDP rankings. And with this report, his dynasty window’s short-term outlook has to be a push downward.