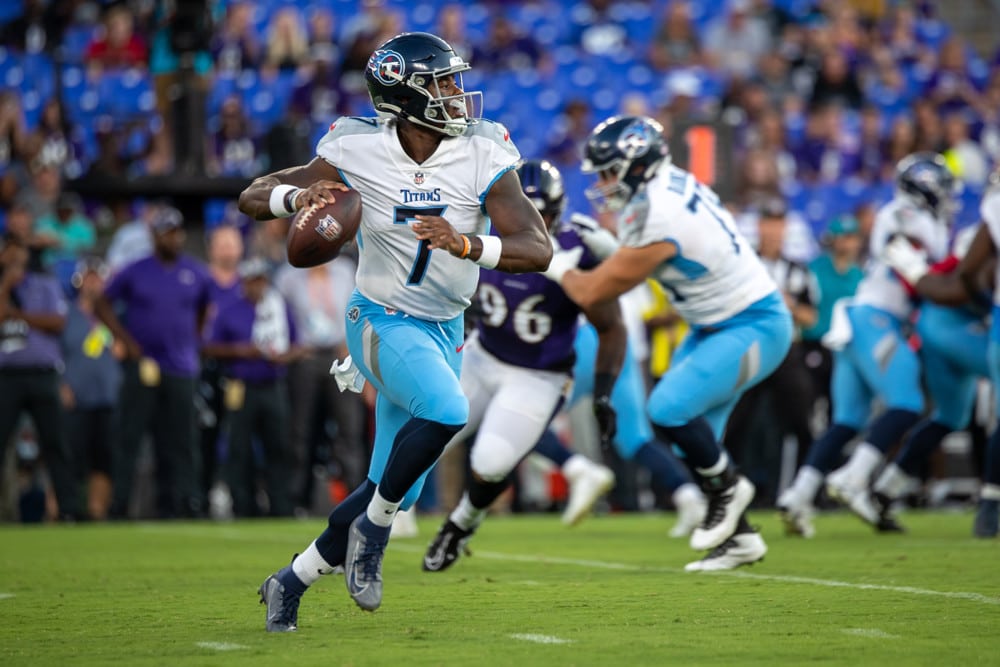 BALTIMORE, MD – AUGUST 11: Tennessee Titans quarterback Malik Willis (7) scrambles out the pocket to make a throw down field during an NFL preseason game between the Tennessee Titans and the Baltimore Ravens on August 11, 2022, at M&T Bank Stadium in Baltimore, MD. (Photo by Charles Brock/Icon Sportswire)

Week 2 of the NFL Preseason is set to kick off with more starters expected to see extended playing time. In the opening week of the preseason, the highlight was the Overs going a dominant 14-3. Let’s dive into the Week 2 slate and see if we think this trend continues or if it will swing back the other way! Looking for more info? Go here for NFL betting.

The Patriots and Panthers meet up Friday night after a competitive week at camp together. Both teams were involved in 23-21 results in their preseason openers, with Carolina winning and New England losing. Bill Belichick’s teams have always been competitive in the preseason going 49-37 over his tenure in New England.

I like for this one to continue to be a competitive battle with the defenses leading the way. The Patriots are still in the transition period with their big question mark at the Offensive Coordinator position. I like the under in this matchup!

The Saints and Packers meet up Friday night with a pair of backup quarterbacks set to make starts. Aaron Rodgers and Jameis Winston are both set to miss the game Friday night. Both teams lost relatively low-scoring games in their preseason openers to Houston and San Francisco.

I like this one to be low scoring, with the backup quarterbacks getting a majority of the work. Furthermore, I think Jordan Love will continue to struggle in Green Bay. I like the under in this Friday night matchup!

A look at the growing connection between Aaron Rodgers & some of Green Bay's pass-catchers at #PackersCamp.

The Buccaneers and Titans are set to meet Saturday night in Nashville. The big storyline in Tampa Bay is the absence of Tom Brady. On the other side, Ryan Tannehill and Malik Willis will carry the load for the hometown Titans. Both teams lost their preseason openers to Miami and Baltimore.

I like for this one to be another low-scoring game with Brady out of the lineup. Additionally, Todd Bowles and Mike Vrabel are both defensive-minded head coaches. I like the under in this matchup between two strong defenses!

The Steelers and Jaguars will meet Saturday night in a battle of young quarterbacks. Jacksonville has struggled throughout this preseason offensively in year two of the Trevor Lawrence era. Their opponent, the Steelers, won a thrilling preseason game over the Seahawks. During Mike Tomlin’s era in Pittsburgh, they are 35-24 in preseason action.

I like the defenses in this matchup as well. Tomlin puts an emphasis on the preseason, and Doug Pederson told reporters that their defense will get a lot of work on Saturday night. I like the under in this matchup between two young quarterbacks!

I like the Raven’s defense in this matchup to keep this low scoring. The combination of the emphasis Harbaugh puts on preseason and the expected limited play of Kyler Murray, and Lamar Jackson projects this one to be a defensive battle. I like the under and for the Ravens to continue their win streak in this matchup!

The Falcons and Jets will conclude Week 2 of the preseason on Monday night. Both teams had come from behind victories in Week 1 on the road. 2nd-year quarterback Zach Wilson was injured in the preseason opener and will be sidelined for a couple of weeks. Robert Saleh remains unbeaten in the preseason over his two-year stint in New York.

The Falcons and Jets both were solid offensively in their preseason openers. I expect them both to regress in more of a defensive battle with more defensive starters set to play Monday night. At last, I like another under in this matchup to conclude Week 2 of the preseason!

Coach Saleh gives an update on QB Zach Wilson, who is back in the building. pic.twitter.com/HjB6kR0gAd