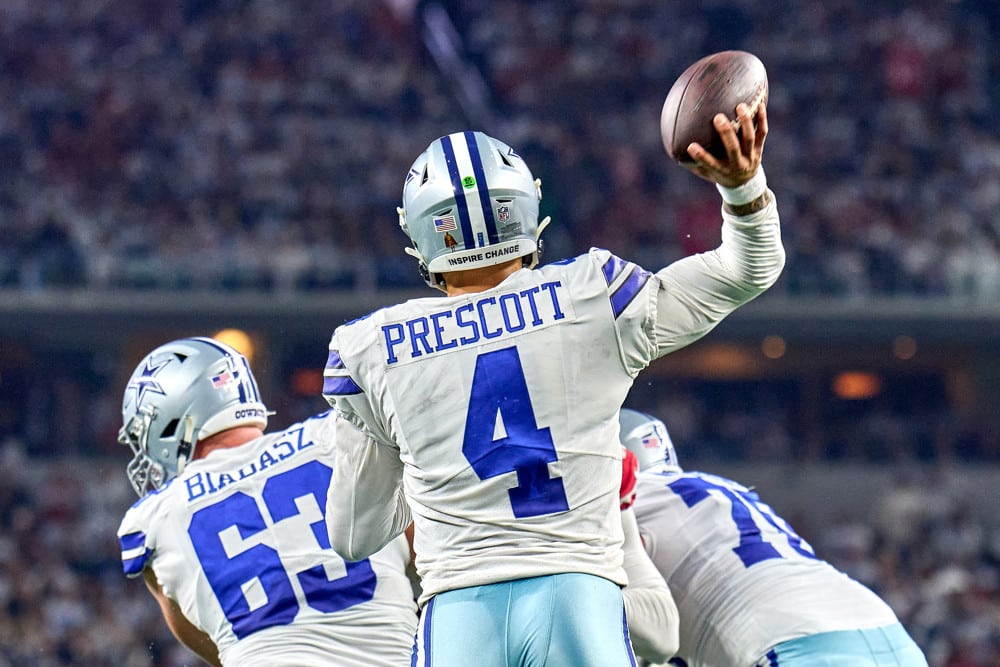 The NFC East enters another season with high expectations from its four bitter rivals. This historical division has been the most unique division in the NFL for years because of its rich history and great rivalries. The NFC East has also not had a repeat division winner since 2004 during the Andy Reid and Donovan McNabb era. Last year, Dallas won the division, going away at 12-5. Additionally, Philadelphia returned to postseason play as the NFC’s final Wild Card team. Let’s take a look at these division rivals and give out this year’s NFC East winner.

The Dallas Cowboys enter the 2022 season as the NFC East favorite again. They finished the 2021 season with 12-5 record but once again had an early round playoff exit losing to the San Francisco 49ers at home. The main reason Dallas was able to win the NFC East last year was their dominant 6-0 record in NFC East games, with a point differential of +133 in those games.

Dallas was led by their dominant defense, ranked at the top of the league in multiple statistical categories. Dallas led the league in Team Defense DVOA, Turnover Differential, and Takeaways behind Micah Parsons and Trevon Diggs.

For a Jerry Jones-led franchise, this offseason was a relatively quiet one in Big D. They lost key starters in Amari Cooper, Randy Gregory, La’el Collins, and Cedrick Wilson. To replace these starters, they added guys in free agency like James Washington, Dante Flower, Carlos Watkins, and recently added LB Anthony Barr.

Expectations remain as high as ever in Dallas despite the offseason changes. This is a big year for Mike McCarthy and his future in Big D. I don’t expect Dallas to repeat its Turnover Differential success in 2022 and for there to be regression.

Additionally, it will take time for Prescott to mesh with the new receiving core. I like for the non-repeat division winner trend to continue and for this to be the final season for McCarthy on the sidelines in Dallas.

This route by CeeDee Lamb 🤧

The Philadelphia Eagles had arguably the best offseason of any team in the NFL. Under first-year head coach Nick Sirianni, the Eagles overachieved and rallied from a slow 3-6 start. They won six out of their final seven meaningful games (sat their starters in Week 18 against Dallas) to claim the final Wild Card spot in the NFC before falling to the Tampa Bay Buccaneers. It was the running game that led Philadelphia to their 2nd half success, where they averaged nearly 200 yards per game on the ground.

The offseason fireworks began on draft night when they made the blockbuster trade with the Tennessee Titans for WR AJ Brown. They will pair Brown with 2nd-year WR DeVonta Smith in hopes of taking this passing attack to another level in 2022.

The Eagles also made splashes with the defensive signings of LB Haason Reddick and CB James Bradberry. Philadelphia also had draft selections that were widely respected in a pair of Georgia Bulldog defenders with DT Jordan Davis and LB Nakobe Dean. They also added depth to the offensive line with the selection of C Cameron Jurgens from Nebraska.

Like Dallas, expectations are as high as ever again in Philadelphia. The moves the team has made this offseason set up for lofty expectations like the “Dream Team” offseason years ago. The Eagles have the best overall roster in the division but have the biggest question mark at the most important position. I think the stage and expectations are too big for Jalen Hurts in Philadelphia, resulting in more inconsistent play from him. I like for the Eagles to be the most disappointing and underachieving team in 2022.

Washington enters the 2022 season with a new team name, a new quarterback, and year 3 of the Ron Rivera era. Washington underachieved last season, going 7-10 after a slow 2-6 start to the season. The main reason for the team’s early struggles was the defense. The 3rd down defense was historically bad in the first half of the year. The Commanders were a top 5 defense two seasons ago, but 2021 was definitely a step-back year for a unit that has been heavily invested in, especially up front.

The big move for Washington this offseason was trading with the Indianapolis Colts for QB Carson Wentz. This move sets up a final chance for Wentz to revive his career with his third team in as many seasons. The other big move this offseason was extending Wentz’s #1 option, WR Terry McLaurin. The team lost a pair of veterans in G Brandon Scherff and S Landon Collins.

Washington comes into this season flying more under the radar than last season. The Wentz stock is as low as ever, and the defense is coming off a big-time underachieving year. I think Wentz has a solid bounce-back year due to the talented young skill position players around him on this roster.

Additionally, I expect the defense to come back at a high level with a softer schedule in place. I like Washington as my sleeper team in the NFC East and to win the division again under Ron Rivera!

The New York Giants enter 2022 with a new coach and general manager in place. Brian Daboll and Joe Schoen come over from Buffalo in hopes of turning around this storied franchise from the basement. The Giants were a dumpster fire by the end of the Joe Judge era and were in much need of a fresh start. Daniel Jones enters his 4th season in New York and will have his 3rd different head coach and system to learn.

Outside of the coaching and management news, the Giants made offseason moves in an effort to improve their offensive line and defensive line. The Giants got their offensive line help in free agency with the acquisitions of Mark Glowinski and Jon Feliciano. In the draft, they added another piece to that newly revamped offensive line with the selection of T Evan Neal from Alabama. The highlight of their draft came at #5 overall when they took the highly talented DE Kayvon Thibodeaux from Oregon to provide another pass rusher to an already talented group.

New York improved their franchise on and off the field this offseason. This is a big year for Jones to see if he can be the guy under center going forward in New York. The addition of QB Tyrod Taylor will also provide competition for Jones if he doesn’t play well early. I like the Giants to be one of the more improved teams in the NFL this season and push for a playoff spot come January.