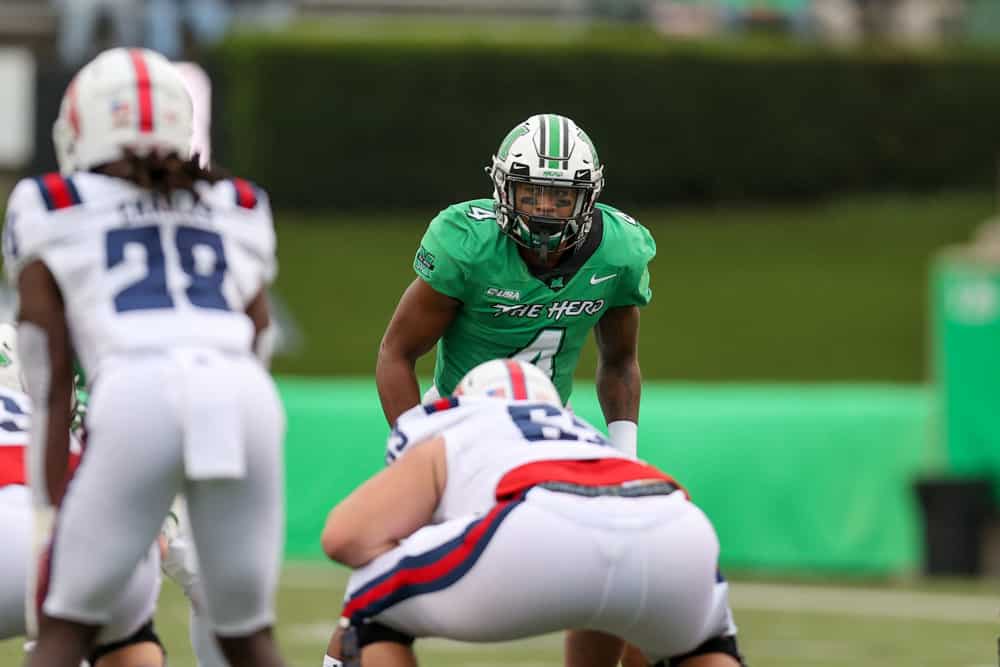 The start of the inaugural season of Major League Football is looming closer. Our experts through their analysis and the statistics breakdown the fifteen linebackers to look out for around the league.

A Tasmanian devil of a linebacker has contributed to the recent success of Southeastern Louisiana football. His presence and football instincts have made their defense one of the best around. During his senior year, he led the conference in total tackles with 80 along with 2 sacks plus 2 pass breakups and 2 forced fumbles. During the game that helped him win honors for Louisiana Defensive Player of the Week, he produced a stat line of 17 tackles with two for loss along with a sack, a forced fumble, and a pass breakup in a victory over Northwestern State. That added onto an eighty-tackle season in just the span of seven games. His athleticism merged with his intelligence and instincts brings so much the Arkansas Attack defense.

He may be too small for the position, but let’s face. Football today is becoming a game of speed and finesse. A linebacker who is quick from sideline to sideline and has the strength to shed blocks. A multi-faceted backer is what he is, someone who can play pass coverage and rush the passer equally as well as he can stop the run. Think of him as a smaller version of Junior Seau or a mirror reflection of Patrick Willis with a comparable skillset.

During his senior year with the Ohio Bobcats, Blair Brown was ranked first in the FBS in tackling efficiency with 96 tackles and only missed a tackle just three times. Blair Brown was given an overall grade of 92.4 and a run defense grade of 91.5 by Pro Football Focus. Only Alabama’s linebacker that year Reuben Foster was given higher grades in those same categories, who eventually was drafted in the first round by the San Francisco 49ers the following draft.

Brown’s 131 total tackles were tied second in the FBS among inside linebackers that same season. He was also ranked third in the nation in run-stop percentage. According to the game film, he possesses a vicious, sonic-booming play style. Not afraid to counterattack on blockers and all it takes is one hit from him to make any ball carrier think twice about running his way. With blockers he doesn’t just take them on, he bulldozes them like a minotaur. He is basically a downhill linebacker, getting to the ball by any means necessary.

This guy sure does have a huge college football resume to brag about with countless awards won and all-conference selections. Highly recognized as a preseason conference All-American by some of the most notable sports magazines out there like Athlon, Lindy’s Sports, and Street and Smith’s. Watching him on film, he is a traditional linebacker. A backer who is big, strong, and a tackling machine. One hundred and sixty-eight tackles in 2019 and 19 tackles on the opening day of his Senior season says it all about this fine football player. Finishing his career with 22 double-digit tackle performances. He could eventually become Alabama’s Luke Kuechly.

Check out Zach Hall's 61-yard pick six!! It is tied for 8th longest in school history.

Aaron Tiller is an athletic defender with speed and range except he actually played against bigger college competition like Georgia, Texas State, and Southern Miss. In this position, he recorded a sack in each of those matches playing for the Southern University Jaguars. He spent most of his time rushing Quarterback from all spots of the line of scrimmage with his Dwight Freeney-like spin move. He has the tools to become a superb pass rush specialist for the Ohio Force.

Ranked fifth among HBCU football players in sacks per game with 0.86 with 9.5 total sacks in 2017.

SWAC Conference Defensive Player of the Week (2019): Five tackles, four tackles for loss, and three sacks in a win over Alabama A&M.

A great sense of where the ball is going before the quarterback says, “Set, Go!” He is already there to meet you before you even think about making your way to the endzone. He’ll be there to make you know better than to come his way. You can’t escape him, you can’t evade, and you can’t outsmart him. All you can do is feel his wrath. Through his eyes is probably like a widescreen view of the field and his quickness from point A to point B is frightening for an offense. The power of a brute, the agility of a leopard, and the brain of a computer is a scary combination. That is the kind of football player Tristen Vance is.

Another guy who is not in the correct position based on his height and weight. But he is aggressive enough to be a linebacker. Beau Griego would be considered a hybrid linebacker. Half Devin White and half Harrison Smith. A man who can check pass catchers like a Hall of Fame defensive back as well as he can catch ball carriers in the backfield like an All-Pro linebacker. Arms long enough to stand up blockers for outside containment. At times, he plays too high to where he exposes so much of his chest for running backs to run through. But he does wallop a king size hit on a daily basis.

(Set the conference record for tackles made in a season, 104)

Like Beau Griego, Cecil Cherry may be underweighted to be considered a linebacker, but his style is a throwback to the position. He looks like Derrick Brooks or Bobby Wagner flying around the field. Making big plays and big hits. He caught the attention of NFL scouts, but the pandemic that hit during 2020 put a halt to everything. Including the pro day, he was scheduled to have. He didn’t make it to the NFL, so he settled for the FCF, Fan Control Football. Cherry continued to display his many talents that are not seen in many linebackers. He shall show off his freakish gifts for the Arkansas Attack and could become their best defender.

When you hear “standing at five feet and eleven inches tall weighing two hundred and twenty pounds,” it’s a size more fitting for the safety position. Despite the appearance, Tavante Beckett has the style that makes him a true linebacker. The speed gives him the advantage to evade blockers and chase down scrambling quarterbacks and speedy tailbacks. He is definitely a sure tackler and will make you feel the pain. Not many linebackers have ball skills like Tavante Beckett does. He can cover like a safety and can attack the ball like a safety. He is truly a one-of-a-kind talent.

Tavante Beckett is all over the field tonight!

He gets his THIRD fumble recovery of the night and takes this one in for the @HerdFB TD! pic.twitter.com/uCNVpbFeIm

The Ohio Force just might have the best set of linebackers in Major League Football. Terry Whittington and Aaron Tiller are on the edges with Tavante Beckett and Tristen Vance in the middle. This is an elusive and tenacious cast of backers right here. Terry Whittington not only can get to the quarterback with ease. He can also play pass coverage well and can stop ball carriers dead in their tracks. Not many running backs will get so far with Whittington around.

Whittington has a set of moves to take care of offensive linemen to get to the passer. Bill Conley helped build a great tradition of legendary linebackers over at Ohio State and once again he will be seeing before his eyes more soon-to-be great linebackers to come with the Ohio Force.

Best believe that once you catch eye to eye contact with Taylor Powell, it is over. Once he gets his hands on you, there is no escape. It is best for you to just go down yourself before he makes you go down. Otherwise, you will be in a world of hurt attempting to deal with Taylor Powell. He can be a tackling beast and a ballhawk at the same time. There are endless possibilities of what Terry Shea can do with this guy and what this guy can do for the Virginia Armada.

A Stat monster for a linebacker is what Gee Stanley is. He doesn’t stop playing until he hears the blow of the whistle. Amazing speed and a great sense of where the play will go. He is a do it all linebacker and that is what is expected of linebackers in the game today. He will make a great trio of linebackers for the Arkansas Attack. Gee Stanley patrolling the defense along with Cecil Cherry and Alexis Ramos will be a sight to watch. Maybe there should be a nickname given for this group, “The Back Attack?” How about, “The Little Rock Crew?” Whatever it is, expect a lot of damage done from these three.

Despite of elderly age for a football player, the experience is what matters the most. Fundamentals most of the time overtake athletic ability or even the lack of it. Kaelin Burnett is thirty-two years old, and he has spent his whole football journey so far not cracking the starting lineup. He sure makes the best of the time he gets on the field. He has even spent playing time on special teams.

Constantly, he is a linebacker who stays disciplined and doesn’t over-pursue. An aggressive tackler and can play pass coverage decently too. A decent pass rusher to add as well. What he brings to Alabama Airborne is wisdom and his mentality is surely what head coach Jerry Glanville would love about him.

This linebacker may have difficulty playing the position not only because of his size and height. It is also because he plays too high and plays hesitantly at times. He’ll play like a chicken with his head cut off at times but does make up for it with the tenacity he brings. A streamer down the line and will keep up with the ball carrier step by step. There is no eluding him and let’s also take into account his athleticism. He was a three-sport varsity athlete in football, basketball, and baseball back in high school.

A great amount of football competition can also tell the success of a player and how well he plays against that competition. From the BIG 12 as a Kansas Jayhawk to the Conference USA as a UTSA Roadrunner could only have made Denzel Feaster a better football player. Already coming into the league with a fair amount of competition against some of the best football programs in the nation.

Feaster may not be someone to fear, but he sure can be a good contributor to building a winning foundation here with the Virginia Armada. He could become an improved football player under the guidance of head coach Terry Shea. Terry Shea himself has a knack for improving football talent.