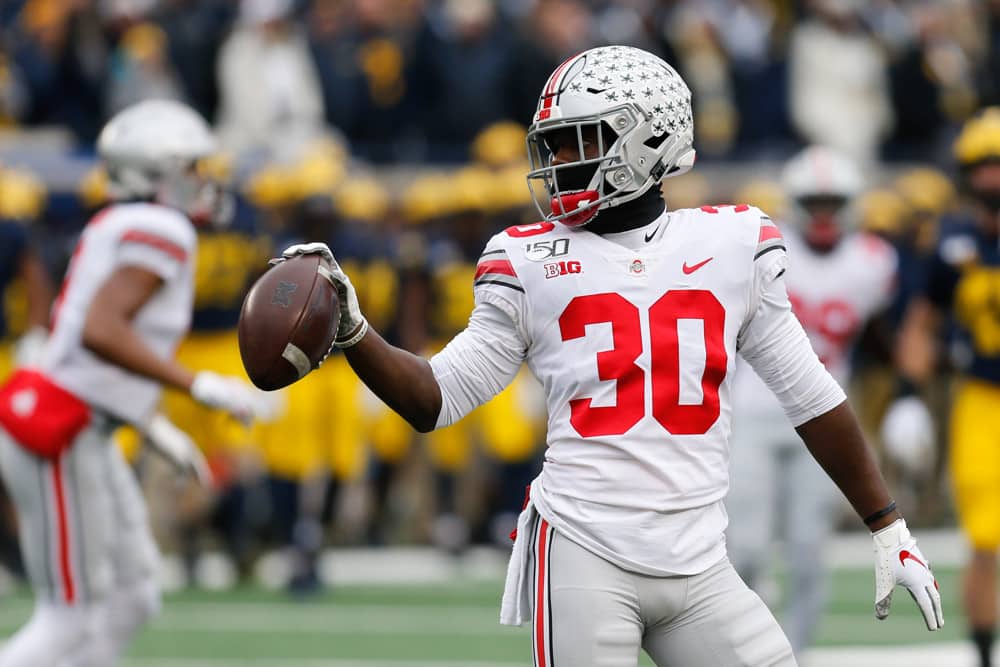 With the upcoming MLFB season upon us the SGPN network is breaking down the top 10 players for each team. Today we’re taking on the Ohio Force which has an exciting group of players for this upcoming season.

He is a skilled pass rusher with a frame perfect for a defensive end at 6’4, but maybe a little too lean for the position weighing in at 220 pounds. The conference All-American just finished his career at Midwestern State University with 5 sacks, 9 quarterback hurries, 47 total tackles, and 15 tackles for loss in ten games. His 1.4 tackles for loss per game led the lone star conference and was 30th in all of NCAA D-II. Not only is he an athletic defender, but he also has a motor that runs for the entire game.

A streamer down the line of scrimmage and a hustler trying to make every hit. His more preferred position would be Outside Linebacker where he would be more fitted to rack up more sacks from a two-point stance than from the three-point. His speed and leopard-like agility definitely give him the advantage over opposing offensive lineman. Something that also describes Buckeyes Alum now NFL star, Chase Young, and that’s what Bill Conley loves in any football player, uniqueness.

A true dual-threat signal caller that plays mistake-free football. His play along with his intelligence and leadership helped make the Tiffin Dragons a perennial contender. During his five years being the starting Quarterback for Tiffin, he has thrown 99 touchdown passes to just 33 interceptions and also added 27 rushing touchdowns for his career. As Bill Conley tends to put an Ohio State football influence onto the Ohio Force, it is a mentality that is multi-dimensional. Where Quarterbacks just don’t throw the football, they can run it, catch it, or do whatever is up their sleeve. A Quarterback that just keeps opposing defenses guessing and that’s the kind of player Nick Watson is.

He has a stature like Plaxico Burress, standing at 6’6 weighing 225 pounds, and is a perfect size and weight for a hybrid pass catcher. He may be a football journeyman, but he is certainly a football natural. A swift route runner, a solid run blocker, and a physical wideout. A description that fits few other wideouts that have ever played the game. Not only will his athleticism help him breakout in this offense, but the football experience from Junior College to the SEC, to the pros will as well.

Ross’s hands are great, but Dez Stewart’s hands might be better. The way he tracks the ball and catches it at its highest point is superb. Another smooth, explosive route runner that you could also have in the slot. A guy who can get the route tree down to a “T.” A dangerous guy after the catch as well. He is another player who has been on the move with time spent with the Buccaneers, Packers, Steelers, Washington, and Lions, but mostly on the practice squad. This is someone who can be a very exciting player to watch in this league.

Ross was also reunited with his old head coach from college at Old Dominican University, Bill Conley. Coach Conley was the one who made him a 2-time conference All-American by having him return kicks, run reverses plus jet sweeps, and gain 3,968 all-purpose yards and 28 total touchdowns throughout his career. Expect coach Conley and The Force to utilize Dez Stewart in every way possible.

Here is a guy who possesses great ball skills, great instincts, and an abundant amount of tenacity needed to become a lethal talent in the secondary. He can cover like a lockdown Cornerback and can hit like an All-Pro safety. His step-by-step speed makes it difficult for opposing wideouts to leave him behind, and his instincts benefit his wide-range skills. That also explains how a defensive back averages over 30 solo tackles a season. Interceptions and pass knockdowns are typical statistics for any defensive back.

54 total tackles last season at Arkansas Pine-Bluff is something that used to be heard of back in the glory days of football. His skill set and style of play ought to be reminiscent of another safety that Bill Conley recruited to come to Ohio State, and eventually became one of the NFL’s most relentless hitmen, Donte Whitner.

Defensive Back Jalon Thigpen @jalonthigpen21 currently ranks at #3 in the SWAC for total tackles.

He currently has 39 SOLO tackles and 15 Assist tackles.

Last season Thigpen led the SWAC and tied for first in the FCS for interceptions with 5.#Emptythebucket 💪🏾 #1Team1Roar 🦁 pic.twitter.com/EnV6NISAY4

Like Abdul-Karim, Tiller is an athletic defender with speed and range except he actually played against bigger college competition like Georgia, Texas State, and Southern Miss. In this position, he recorded a sack in each of those matches playing for the Southern University Jaguars. He spent most of his time rushing Quarterback from all spots of the line of scrimmage with his Dwight Freeney-like spin move. He and Abdul-Karim as a possible outside linebacking combo can be a real force to be reckoned with.

Ranked fifth among HBCU football players in sacks per game with 0.86 with 9.5 total sacks in 2017.

SWAC Conference Defensive Player of the Week (2019): Five tackles, four tackles for loss, and three sacks in a win over Alabama A&M.

A former Big Ten Running Back being put in a Big Ten coaching system, he was a five-star All-American in high school who came to Ohio State just to be a bottom of the depth chart tailback. He only came into the games during garbage time, when the scoreboard was decided by 30 points or more. During that little playing time, he showed the elusiveness and multi-dimensional skills he had that made him a high recruit for the Buckeyes. He would score on wheel routes, screen passes, and rack-up runs where he would zig-zag by defenders for positive yardage.

McCall also played cornerback during his Senior year in Columbus. Now he comes to an offense managed by offensive coordinator Mitch Browning.  An offense that is Running Back friendly. An offense that once gave the Minnesota Gophers 3 thousand-yard tailbacks from 2002-05. Mitch Browning will definitely give Demario McCall a chance to strive.

Arms more than long enough to reach out for batted-down passes. Speed is just right to stay stride for stride with speedy pass catchers. All the instincts are there in this young man who had little playing time at Maryland but was able to showcase his skills when transferring to Towson. His ability to break on the ball and blitz through the backfield like a ninja are his most impressive attributes. With the perfect body type and complete skill set for a cornerback, Carter Jr. has what it takes to be a true shutdown corner for the Ohio Force.

Third downs are the most crucial part of any football game. Somehow, men who live to be the go-to guy in this moment of the game are often underappreciated. Willing to be a third-down option to keep drives alive is crucial to a team. That guy for the Ohio Force will most likely be Jon’Vea Johnson. He’s been the number one wideout and the go-to guy on third down for the Toledo Rockets. A second team and third team All-Mac selection that garnered 123 receptions, twenty-four of them being touchdowns.

Johnson was also a Biletnikoff award finalist in 2017, an award given to the best receiver in the country. According to the reel, he’s not a guy who is shifty and breaks tackles, but you never see him drop the football. A possession wideout for short gains is what every offense needs in crucial moments of a ballgame. Johnson’s stat line in the 2017 Mac Championship against archrival Akron being six catches for 103 yards and a touchdown tells you that the brighter the lights, the brighter this kid is going to shine.

They call him “The Commissioner,” for his ability to control the line of scrimmage with his effective pass rush moves, strength, and agility. He will win every one-on-one battle, and his run-stopping ability is equally as good. Dakavian Champion has a motor that is in no need of gas. The size of a bear and the agility of a tiger is a deadly combination, and that is what a champion is. The tape would remind you of an NFL star defensive lineman the likes of Albert Haynesworth, Fletcher Cox, or Daron Payne. The “Commissioner” will be the center of the Ohio Force defense where all ball carriers will run into a dead end.