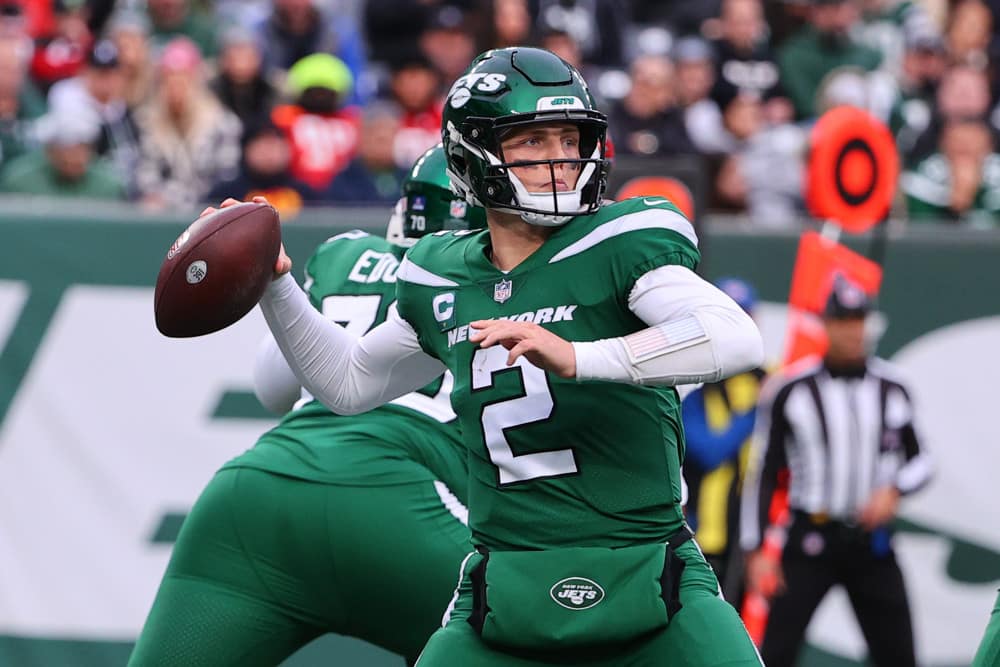 In a new series kicking off for SGPN this week, Justin Bruni and I will be examining some of our ADP discrepancies between our ranks and the Fantasy Pros ECR (Expert Consensus Rankings). We will go through each position and identify players we are both higher and lower on than consensus. As there is more information on the higher-end fantasy assets, we will be focusing more on late-round targets. With July right around the corner, we are nearing draft season for most of the fantasy community. The ADP in these drafts will be heavily influenced by the rankings on Fantasy Pros and other similar websites. So now is a great time to take advantage and find some late-round gems that are being overlooked. I will begin this series by highlighting three Quarterbacks I am higher on than the Fantasy Pro’s Experts.

Wilson is in one of the most improved Quarterbacking situations in the league going into 2022 season. After becoming the number two pick in the draft last year, the beginning to Wilson’s career was disappointing to say the least. He had a 28.2 QBR, while throwing for 179.5 yards per game, on 6.1 yards per attempt. Each ranked near the bottom of the league, and he was clearly overmatched in his first year in the NFL. Corey Davis and Elijah Moore were also in and out of the lineup in 2021. This left Wilson little opportunity to build chemistry with his best receiving weapons. He himself missed four straight games due to a knee injury suffered in week 7. These reasons contributed to a lost rookie season for the young signal caller. This is also why he should be in for a major bounce back in 2022.

Davis and Moore are now healthy, and the Jets used the 10th overall pick in the draft to select Ohio State receiver Garrett Wilson. These three should make up one of the best young receiving units in the NFL. New York also selected Breece Hall in the second round, who should be a dynamic three down back in the NFL. Zach Wilson showed improvement at the end of the season as well going his last five starts without throwing an interception. Additionally, he showed promising dual threat ability, amassing 260 yards rushing through that five game stretch. Combined with his obvious talent as a passer, the fantasy upside is clearly there. Draft him confidently as a low end QB2 in super flex leagues, and it wouldn’t surprise me at all to see a him finish as a top 15 QB in 2022.

After a disastrous end to his 2021 season, Carson Wentz is currently being ranked outside QB2 territory according to the experts at Fantasy Pros. This is far too low for a Quarterback who finished as the QB14 last year in fantasy. He also is coming into a much improved situation with the Commanders. Wentz was second to last in pass attempts for Quarterbacks who played 16 or more games in 2021. With a decimated receiving core, the Colts ran the offense almost exclusively through Jonathan Taylor. Furthermore, Carson Wentz’s tendency to make mistakes in key situations also resulted in a loss of confidence from the coaching staff. With his third team in as many years, this could be Wentz’s last chance to be a starter in the NFL. These concerns are causing Wentz to drop dramatically in ADP this off-season.

Despite his struggles as a real NFL Quarterback, none of this matters for his fantasy prospects in 2022. Taylor Heinicke is the only threat to his playing time on the roster, and we saw how that experiment played out last season. Wentz will make mistakes as he always does, but will be given the full season as the starter. Washington also has a receiving room that consists of Terry McLaurin, Jahan Dotson, Curtis Samuel, and Logan Thomas. With these weapons Wentz will have considerably more pass attempts than he did in 2021 with the Colts. If he stays healthy there is no scenario I see him finishing outside of QB2 territory. Take advantage now, and acquire a player who is sure to outperform his current ADP.

Carson Wentz with some zip on his throw to John Bates. pic.twitter.com/1UzZjKB2Hy

This ranking is going under the assumption that Garoppolo will not be a starting Quarterback this season, which I don’t see being the case. Despite their best efforts to maintain leverage, there isn’t a chance that the 49ers keep him on the roster. Knowing this, most teams are wisely waiting to acquire him for nearly nothing, or through free agency. Assuming he will be with a new team in the near future, he should comfortably beat his QB33 ranking according to Fantasy Pros. In the two seasons he’s played at least 15 games, and managed to finish as a high end QB2 in fantasy. Like Wentz, Garoppolo is not an inspiring option for many fantasy managers. The 49ers seemed to always make it a point to keep the ball out of his hands.

However, Garoppolo has shown he can win football games if the right pieces are put around him. His low ceiling as a passer will always prevent him from being considered a long-term solution for an NFL team. None the less, it is likely that Garoppolo will end up in either Carolina or Seattle in 2022. Both teams seem in flux right now without a reliable Quarterback. Even so, each actually has a very talented group of skill players. He is another fantasy option I just can’t possibly see finishing as low as his current ADP if he stays healthy. Garoppolo is particularly a great option as the last pick in best ball drafts. Here he could pair well with a riskier option such as Justin Fields, and provide a stable floor.

Thread of every @49ers touchdown by @JimmyG_10 pic.twitter.com/KImefvfrRr