Last week’s UFC 275 DraftKings lineup got us into the money, once again. While it’s unlikely to be as memorable as that event, UFC on ESPN: Kattar vs Emmett (aka UFC Austin) has some interesting matchups, nonetheless. The problem is there are no real “close” fights, at least according to the bookies, so it’s harder to find real value on a UFC Austin DraftKings roster. Regardless, I have soldiered on – let’s get this money.

My big-ticket item this week is one half of the main event, featherweight Calvin Kattar. He averages a very solid 79.5 fantasy points per fight and exploded for 122 in his last octagon appearance. Even in losses, he’s put up respectable numbers in the 40s and 50s. However, I don’t expect this week to bring him a loss, as his durable, un-knock-out-able style is a terrible matchup for Josh Emmett. 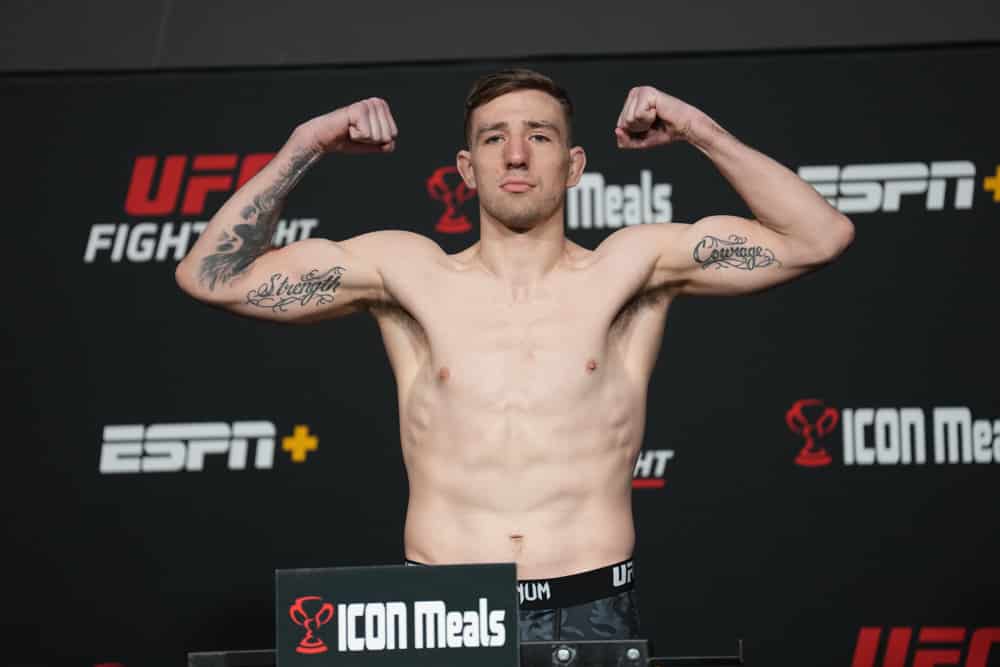 We jump to the curtain jerker of the event and pick up the smaller and younger of the UFC’s Daukaus brothers, Kyle. He’s a submission savant – hence the nickname ‘The D’Arce Knight’ – and his opponent on Saturday, Roman Dolidze, can get sloppy on the mat. One mistake against Daukaus will get his neck snatched and have him tapping out. And, hopefully, get us 118 points like Daukaus earned his last fight.

Next up is Albert ‘Machete’ Duraev in a middleweight matchup against walking highlight reel Joaquin Buckley. Yes, Buckley is capable of eye-popping knockouts, but he seems to be almost only that at this point – a guy pinning all his hopes on knocking out his opponent. I think Duraev’s strong wrestling and grappling will nullify this and allow him to get his hand raised.

The days of me writing off veteran Court McGee are over, which probably means he’s going to lay an egg on Saturday. But he’s coming off of fights with 111 and 89 points, so hopefully not. I think he teaches some veteran lessons to prospect Jeremiah Wells on Saturday and grinds his way to this third-straight win in his 32nd pro MMA fight.

Time for a couple of cheap underdogs to round out this UFC Austin DraftKings roster. Joe Lauzon is well past his prime, but I trust him more than his opponent this week, Donald ‘Cowboy’ Cerrone, despite being absent from the cage since October of 2019. Cerrone is very, very shot, and I think not only could Lauzon get the better of him on the feet, but he’ll also be the stronger grappler in this battle.

Finally, I’ll grab lightweight Guram Kutateladze. While I didn’t pick him in my official UFC Austin predictions, my MMA Gambling Podcast co-host is high on him, so I’m willing to spend $7,800 to round out my roster. He had a very impressive UFC debut, beating Mateusz Gamrot, and you’d say that he’s actually facing an easier matchup this week in Damir Ismagulov.