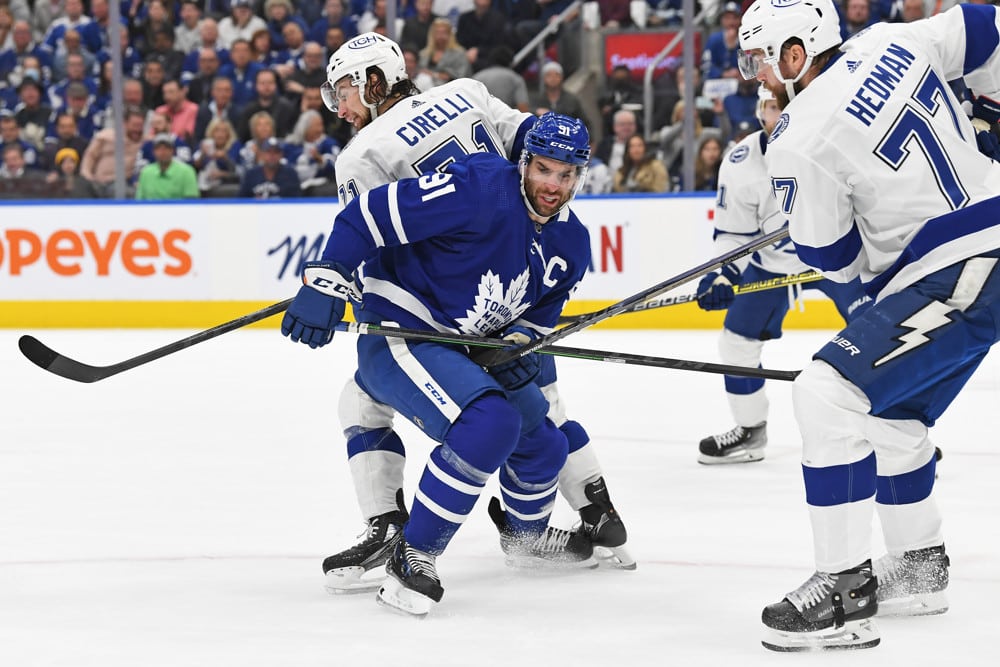 Hockey fans are in for a treat this weekend! The first round of the NHL Stanley Cup Playoffs concludes with five Game 7s! There are three spread out on Saturday and two on Sunday night. Let’s get into our NHL Playoffs Game 7 Picks and DraftKings DFS Stacks, Goalie, and Lineup for Saturday!

This series hasn’t been as competitive as going to Game 7 makes it sound. Antti Raanta and the Hurricanes should win at home to advance to the second round. I like them to do it by at least two goals just as they did in their first three wins, making +190 a pretty damn good price. I’ll take the Over 6 at +100 as well given that there have been 6+ goals in all six games.

Sorry, but I can’t bet on the Maple Leafs to win a Game 7. They’ve come up short so many times as they haven’t won a playoff series since 2004.

The Lightning know how to play with their backs against the wall and I’ll happily take the reigning two-time champs as underdogs in Game 7. Oh yeah, and it’ll be another high-scoring game.

The Kings failed to close out the Oilers in Game 6 at home. That opened the door for the Oilers to win Game 7 in Edmonton and I think they’ll do just that. However, I’m not comfortable laying the -220 juice on a team that choked last year.

Los Angeles is a good value at +180, but my pick for this game is the Under 6.5. There were a few high-scoring games in the middle of the series but a Game 7 should bring out the best in both teams in a tight-checking game.

The Oilers are the biggest favorite on the board and they’re the top stack on the DraftKings DFS NHL slate. McDavid and Draisaitl have been playing together on and off, and I’m expecting big things in Game 7.

Barrie seems underpriced at $4.1k given his usage. He plays on the top power-play unit with this dynamic duo and has 8.4+ FPTS in three of the last four games, including a 15.6 and 16.4.

The Oilers should score goals tonight and these three will be involved.

Aho has been up-and-down in the playoffs for the Hurricanes, but the reason is pretty simple. He has 12.3+ FPTS (51.5 total) in all three home games and just 5.8 FPTS in three road games. Home-ice has been key in this series and we’re taking advantage of that for DFS.

Jarvis flanks Aho on the top line and power-play unit. He had two goals on eight shots in Game 5 at home and picked up two points in Game 1. For just $3.2k, I’ll take a chance at a double-digit performance given his usage.

Trocheck centers the second line but joins the other two on the top power-play unit. Like Aho, Trocheck has been great at home with 12.1+ FPTs in all three games in Carolina (54.2 total, 18.06 avg).

The Oilers are huge favorites so Smith should get the win bonus and likely the 35-save bonus tonight.

If you use both stacks and Smith, you’re left with $8.6k for a winger and defenseman. That should give you enough to fit in two solid players.