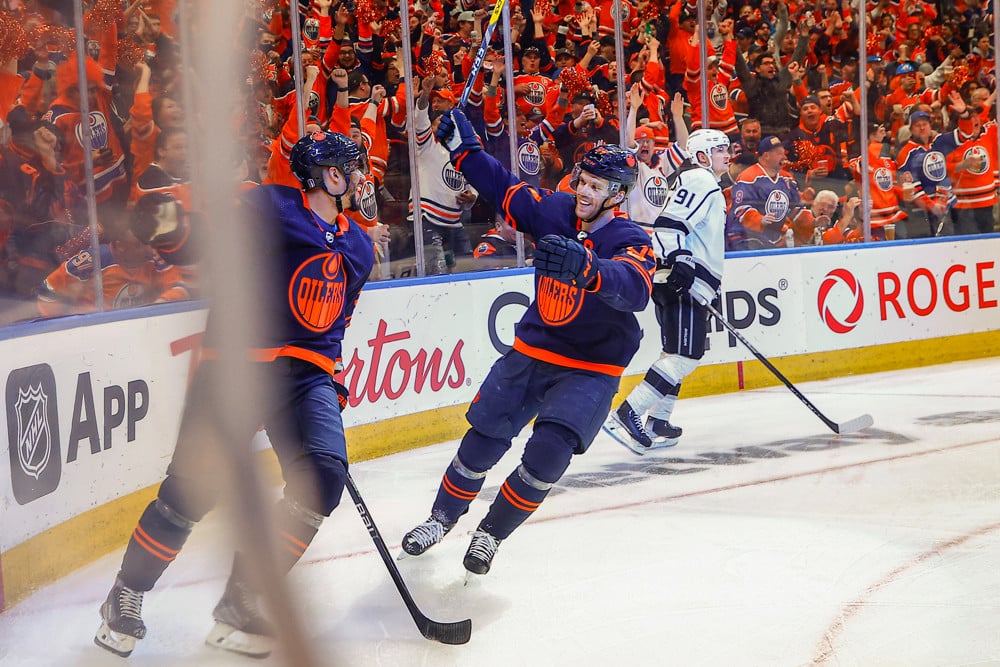 The NHL Stanley Cup Playoffs are getting exciting. We have a few upsets brewing, only one potential sweep, and a lot of back-and-forth series. Let’s get into our NHL Playoffs Picks and DraftKings DFS Stacks, Goalie, and Lineup for Sunday!

The Hurricanes had their best even-strength game of the series on Friday night, but goaltending and special teams were the difference. The Bruins tied the game late in the first period with a shorthanded goal and added two insurance power-play goals in the win. The switch to Jeremy Swayman in net also helped as he made 25 saves in the game.

Nevertheless, I like the Hurricanes as underdogs on Sunday. Pyotr Kochetkov has shown promise in net as the third-stringer and there’s a chance that Antii Raanta returns soon. Carolina is the better team and knows how to beat Boston. They shouldn’t be underdogs here.

The Canes paid dividends for me in the regular season by winning the Metropolitan Division and I’m trusting them again today.

The Wild have gotten over their opening-game shutout with back-to-back blowout wins of the Blues. They didn’t care about St. Louis’ home-ice advantage on Friday, going in there and getting an easy win. Jordan Greenway opened the scoring 39 seconds into the game, Kirill Kaprizov scored less than two minutes later, and the Wild never looked back.

The Blues not only lost Game 3, but also lost a key defenseman. Torey Krug is out indefinitely, adding to the list of injuries on the blue line with Nick Leddy and Robert Bortuzzo both day-to-day.

Marc-Andre Fleury and the Wild have found their game. Minnesota had the sixth-best xGF (43.48%) during the regular season with St. Louis in the bottom 10 (47.19%). The Wild should take a 3-1 series lead this afternoon.

I’ll keep this short and sweet: Andrei Vasilevskiy is 15-0 after a loss dating back to the 2020 postseason. The Lightning know how to win in the playoffs, especially after a loss and at home.

The Oilers finally figured things out after some Game 1 jitters. Connor McDavid has six points, as does Evander Kane after his hat trick in Game 3. Hell, even defenseman Evan Bouchard has five points. Leon Draisiatl, however, needs to pick it up with only four points (three goals) in three games.

Mike Smith is over his Game 1 gaffes and has the Oilers poised to make a run. The top guns are proving to be too much for the Kings.

The Oilers have 14 goals in their last two games and McDavid hasn’t scored any of them. In fact, he “only” has four assists on five shots on goal in the Oilers’ two wins. He’s bound to not only keep up the point production but find the back of the net –– at least once –– in Game 4.

Kane went off for 48 FPTS in Game 3 with a hat trick. He had 13.1 FPTS in Game 1 and 29.5 FPTS in Game 2. He’s excited to be in the playoffs and the results are showing. He plays with McDavid on the top line and the duo should continue to put up points.

If we’re starting with these two, we’re going to need some good budget options…

Eriksson Ek (10.4 FPPG) is a depth contributor on the third line with Zuccarello (11.4 FPPG) playing up in the lineup, but they are both on the second power-play unit.

Eriksson Ek is putting up points in the playoffs, both fantasy and otherwise. He’s put up at least 10.5 FPTS in all three games, including a total of 50.3 in the last two. JEEK will shoot the puck to give you a decent floor and has upside with a three-point game already in these playoffs.

Zuccarello has three points (goal, two assists) and three shots in his last two games. The Wild are feeling it and Zuccarello should be involved on the top line and PP unit.

A snipe by Mats Zuccarello! pic.twitter.com/87gckbcZtS

Fleury wasn’t given much help in Game 1 and he allowed four goals on 31 shots. However, the Wild improved in front of him and he’s showing how good he can be in the playoffs. He had 21.4 FPTS in Game 2 and 22.8 FPTS in Game 3, coming a few saves shy of the 35+ bonus.

The Wild should win in Game 4 as the Blues haven’t shown much offensively in the last two games. That should mean another 20 FPTS for MAF.