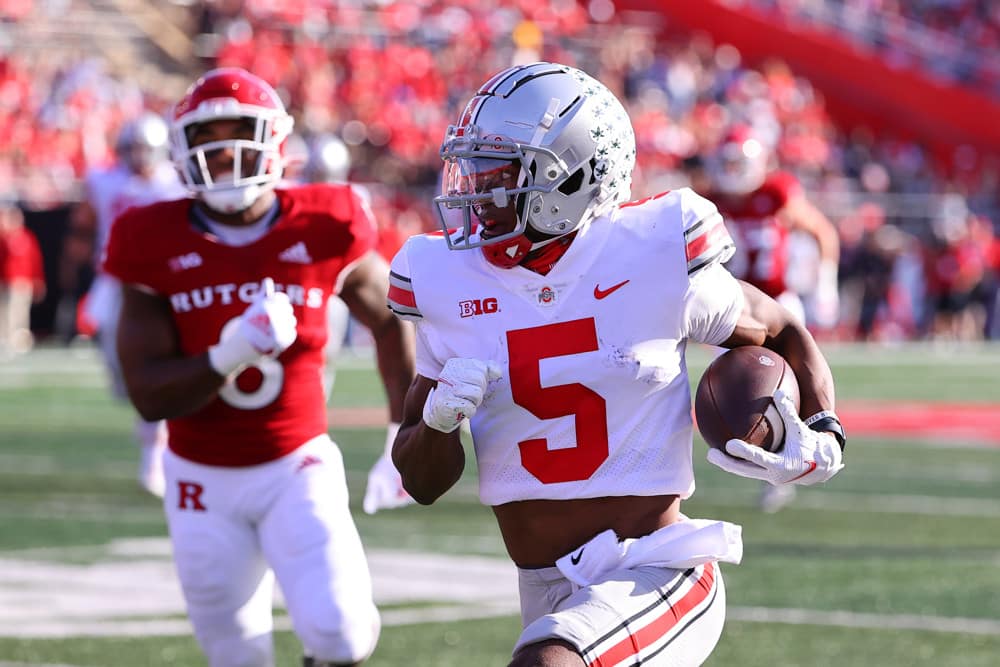 Now that the NFL Draft is complete, we can shift our focus to the rookie draft season! Also, we can finally rank the incoming 2022 rookies comfortably, as we now know their landing spots and situations.  Using this information, I have ranked the top 50 incoming 2022 rookies based off of a standard PPR 1QB league scoring system.

This tier contains one solo player, Breece Hall, the three down back selected in the second round. Landing with the Jets is a perfect fit for him, as he ran a lot of outside zone at Iowa State. He enters the NFL after rushing for 3,941 yards over three seasons, and added 50 touchdowns on the ground. This landing spot cemented him as the 1.01 in all formats, along an opportunity to finish as a RB1 as a rookie! This is why he sits alone atop the 2022 rookie rankings.

This tier is full of wide receivers with the exception of running back Kenneth Walker. He is one of three running backs selected in the second round of the draft, landing in Seattle. This is a great situation for him, as the Seahawks have been looking for a work horse running back ever since Marshawn Lynch left. Last season Walker rushed for over 1,600 yards and 18 touchdowns for Michigan State. Looking forward to 2022, he will carry RB1 upside with a safe RB2 floor.

In this group, we also see all the first round wide receivers. All of them landed in good situations- which is great news for us fantasy mangers. Most of these 2022 rookies will be relative for fantasy football for years to come. Because of this, they are highly interchangeable within this tier.  Having one over the other merely personal preference. Drake London and Treylon Burks walk into the biggest opportunities to receive large target shares. These two will both have WR2 upside as soon as this season!

Tier three is full of wide receivers with huge upside, although carry much more risk. Christian Watson gets one of the best landing spots in the draft after being selected by the Packers. This extremely talented player out of North Dakota State has all the traits you want in a premier NFL player. He produced over 2500 all purpose yards and 16 total touchdowns for the Bisons. As he comes to the Packers, he has only Allen Lazard ahead of him on the depth chart in an offense led by Aaron Rodgers. If he can clean up the technical part of his game, he will emerge as a WR1 for fantasy football.

The only running back in this tier is second round pick James Cook out of Georgia. Buffalo finally addressed a huge need at the position, however, they choose to take a player who profiles as a pass catcher. He will start the season in a RBBC with Devin Singletary. However, with his running and vision abilities, this could very easily change. Transitioning into a Austin Ekeler type player is definitely a high possibility. If this is the case, he will become one of the top 2022 rookies from this draft for fantasy football.

In this tier of the 2022 rookie rankings, we see Kenny Pickett the now Steeler quarterback. As the most pro-ready quarterback in the draft, he will surely come in day one and compete for the starting job. During his senior year, he threw for over 4,300 yards and 42 touchdowns. In a one quarterback league he is worth a late second round rookie pick, as he may explode onto the scene. Players like Kirk Cousins and Derek Carr have been reliable fantasy options for teams- so why can’t Kenny Pickett?

We also see the top tight end make an appearance, with the newest Cardinal Trey McBride. Coming out of Colorado State where he had 2,100 yards receiving and 10 touchdowns, he is one of the most complete right ends in this class. He will get a chance to sit behind Zach Ertz year one and learn the NFL game. This will help him become one of the top tight ends in the league for fantasy in future years.

As we move to the late second range of the rookie draft, the 2022 rookie rankings are full of running backs. We see a lot of back-up running backs who could emerge as lead guys if an injury were to occur. Dameon Pierce has an opportunity to take a lead role in training camp, as the Texans running back room is thin. However, he was never given a lead role in college, so there is concern if he can handle this role. Nevertheless, his potential to finish as a RB2 for fantasy in year one is within reach.

Khalil Shakir is the lone wide receiver in this tier and he is the newest Buffalo Bill. A highly productive wide receiver out of the Mountain West who is extremely versatile. He was used in the slot, outside and even in the run game, and was very productive in each role. For year one, he will slot in as the fourth wide receiver leading to a WR3-4 finish. Although, if an injury was to occur to Jameson Crowder, he would leap into a must start flex play.

As we get into this tier, we enter to the dart throw range. Many of these players in this section of the 2022 rookie rankings are full of  running backs. Of these running backs, Keaontay Ingram received the best landing spot, landing in Arizona. While he had worse draft capital, the fact that will land as the second running back on the roster makes him a must roster. As a Trojan, he produced over 1,000 total scrimmage yards, demonstrating that he is a true dual threat back. Even as a complement to James Conner, he will have fantasy value. Similarly, we have seen this when Chase Edmonds was with the Cardinals.

Along with Keaontay Ingram, we have Kevin Harris and Pierre Strong Jr., who both landed in New England. Both of these players have interesting value going forward. Damien Harris is a free agent next season and James White has an out in his contract. Each players will get an opportunity to earn a shot in 2023 if they can win over the coaches in 2022.

The final tier of the 2022 rookie rankings is headlined by Kyren Williams, who is the newest Ram. He joins a crowded backfield that is led by Cam Akers- who is coming off an Achilles injury. His ability to pass block and to be used as a receiving back will help him earn a roster spot. We have seen the Rams use multiple backs over the past few years, so it’s reasonable to think that they will continue this time around. We could see Kyren Williams carve out a decent role that will lead him to fantasy relevance.