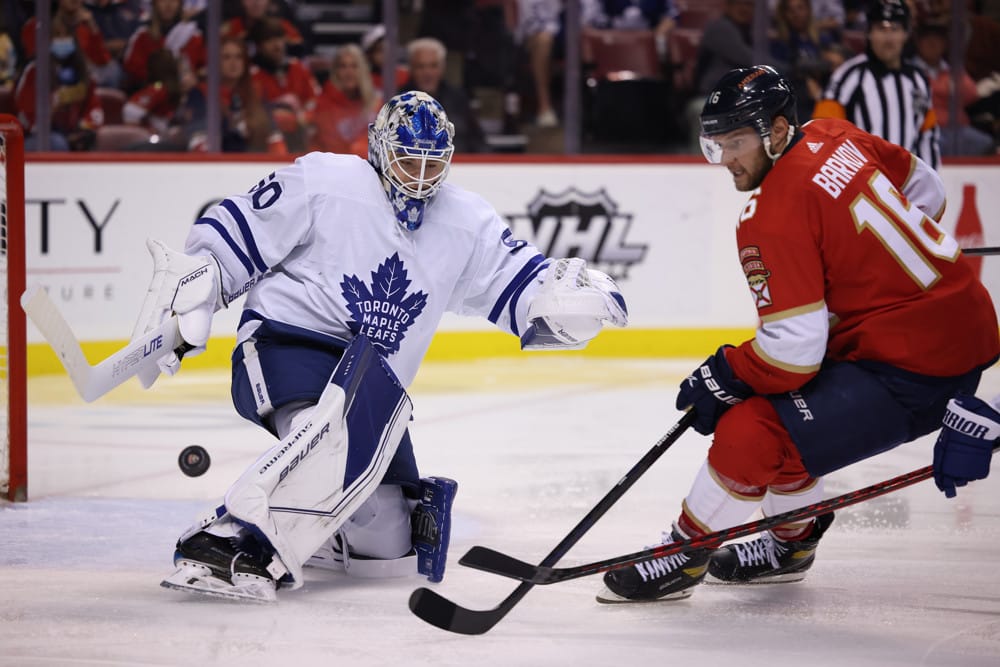 We’ve made it through the first week of the fantasy hockey playoffs. After that, we have just two weeks of competition remaining. So, we’re back to check in on trending goalies that are likely available on your waiver wire—taking a look at players who are trending in the right direction to end the year and give us an extra boost in our playoff box scores. Let’s review my top five streaming goalies for the next two weeks.

Sam Montembeault may not be the sexiest name on your waiver wire, but he will be one of the players getting a heavy dose of starts in the next 14 days. The Montreal Canadians lost Jake Allen to an injury, and his timetable for return is uncertain. I can’t imagine the Canadians bringing him back at this point, Allen already missed games from December to March, and the team has a few games lead on the first lottery position. There isn’t much Allen can do for the Canadians this year; I think we can consider his season over.

While the team has been bad, they’ve had their bright spots across the past few months after Martin St. Louis became the head coach. The Canadians are 12-11-4 since the retired star turned skipper. There will be a few surprising wins from this team down the stretch, but Montembeault’s steady value comes from all the shots the Canadians allow.

The team has allowed the third-most shots against this season. Nevertheless, Montembeault will have solid fantasy outings even in his losses. He will split the net down the stretch with Cayden Primeau, who transferred after Allen’s injury. Montembeault averages 7.67 fantasy points per game this season; he should hold a safe floor with all the shots he takes, but don’t second guess the Canadians just yet; I think they play spoiler as dogs in a few mismatches to end the season.

Sam Montembeault is actually standing on his head for the #GoHabsGo today…elite puck tracking through a ton of chaos here (one of the many great stops so far): pic.twitter.com/UjbriklsBJ

Mike Smith’s fantasy owners are in an excellent situation right now. Smith is getting the bulk of the starts for the Oilers, who look like they’re ready for playoff hockey. Edmonton is chasing a playoff spot, and it’s undoubtedly showing as they’re 7-3 in their last ten games. Smith has appeared in six of those games while taking home victories in five.

Smith has won four straight games and has 31 saves in each. While he is rostered at a higher rate than most listed, he is still available in most fantasy hockey leagues; be the change! Smith has at least 15 fantasy points in four of his last six starts. He has upside for saves and wins in any game he starts, the Oilers are rolling right now, and he’s rejoicing in its spoils.

There may be a few matchups where you second guess starting him or adding him to your lineup, but rest assured, Smith will bring home positive production. Usually, I pick on Smith for easy goals allowed, but he’s really on it right now; he’s allowed just four goals in his last three games. He averages 3.19 goals against, so I’m here to ride this trend until it falls off. Also…let’s not forget his offensive upside, haha!

Chris Driedger has seen a healthy dose of starts recently. While Philipp Grubauer has seen most of the playing time this season, Driedger has consistently played the past two weeks. Driedger has started in four of the Kraken’s last seven games. He ranks tenth in the NHL for fantasy points among goalies for the previous two weeks, so he’s not just getting in the net; he’s also playing well in front of it.

Driedger has two wins in his last four starts and has allowed over two goals just once. His previous four starts also include at least 27 saves or more; the Kraken are a top-three team for fewest shots allowed; however, that hasn’t been the case as of late; they’re averaging 29.3 shots against in their last ten games.

Driedger isn’t a home run to start most remaining games, but he fits the build for a streaming candidate any night he’s available to play, and you need a starting goalie in fantasy hockey; he’s trustworthy given his recent positive stretch.

Despite Jack Campbell’s return from injury, Erik Kallgren has still been a vital asset in fantasy hockey. The two have nearly identical stats across the last two weeks, highlighting that Kallgren is just as viable a start at 18% rostered versus Campbell, who is available in just 5% of fantasy leagues.

In the past two weeks, Campbell has 37.80 fantasy points to Kallgren’s 34.20. Kallgren has 11 GA to Campbell’s 12, and Campbell has nine more saves; it doesn’t get much closer. Kallgren is already the listed starter for the next game against Buffalo; with numbers this similar, you should feel safe to start him against any opponent, let alone a lowly Sabres squad.

The Maple Leafs clinched another playoff berth, so I expect a few extra starts down the stretch for Kallgren. Clinching means that Campbell won’t need to take a bulk of the starts. He can get 100% healthy and conditioned in “Hopes” for a deep playoff run. Kallgren is another perfect streaming candidate; he checks all the right boxes.

Erik Kallgren is doing special things in between the Leafs’ pipes. 😳pic.twitter.com/ksMPtIwfd4

Pavel Francouz doesn’t get a great volume of starts, but when he does, he makes them count! Francouz has just one appearance in net this month, but I’m expecting more starts for him to close the season. Darcy Kuemper gets the most starting volume, but he’ll get more rest opportunities like other goalies on teams who have clinched playoff contention to close the regular season.

Francouz hasn’t lost a start since March 5th. His lack of consistent playing time, paired with the immense success of the Colorado Avalanche, brought this on. He has double-digit fantasy points in five straight games and averages 13.37 fantasy points per game this season.

Francouz is 14-3-1 this season with a 2.58 GAA and .917 SV%; these are incredible numbers for a backup goalie; he should be locked into your lineup any night he gets a start. I’m guessing he can get another five to six starts to close the season; the Avalanche have ten games left with a playoff spot locked and a division crown soon on the way.