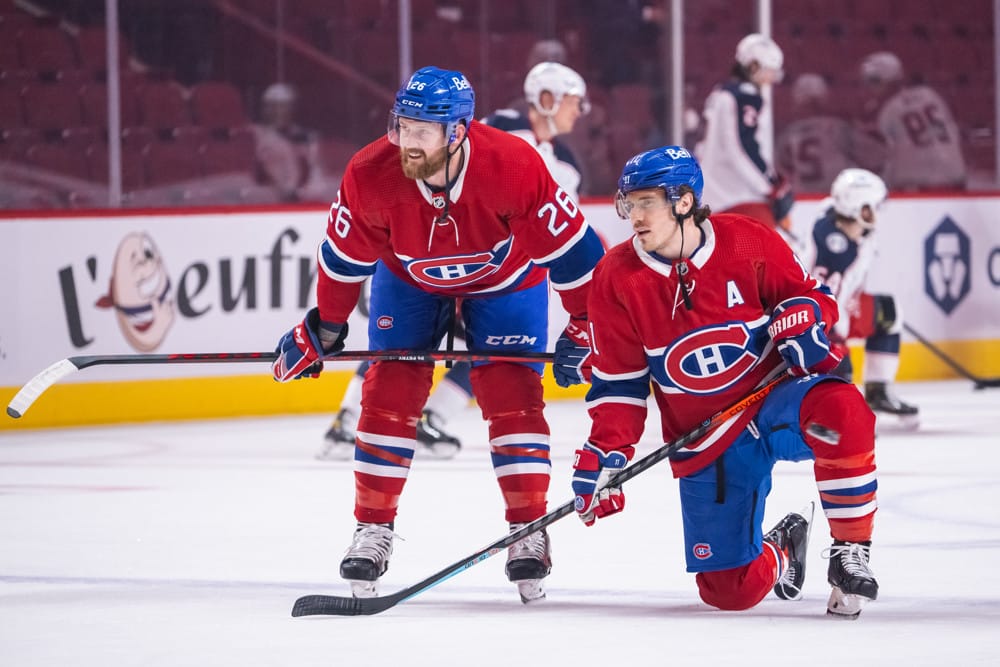 Welcome back to the Fantasy Hockey Playoffs Waiver Wire: Teams to Stream & Best Pickups article! Most leagues are already a week or two into the playoffs, and hopefully, you’re still in the running to win the Fantasy Stanley Cup! As always, I’ll be focusing on the teams that play primarily on the lighter nights of the week. I’ll be your guide to help you win your fantasy hockey matchup this week with the best pickups, goalie options, teams to stream, and teams to avoid.

The Canadiens are one of two teams to be playing on three light nights this week and play four times total.

Given Montreal’s very top-heavy offense with Nick Suzuki and Cole Caufield rostered in 79% and 60% of leagues respectively, there are a few speculative adds that are available in most leagues. Having said that, pick up Suzuki and/or Caufield if they’re available in your league.

Petry missed a few weeks with a lower-body injury and has since returned to the Canadiens lineup. His first game back was on Saturday when he picked up an assist, one shot on goal, four hits, and three blocked shots in 21:05 of ice time. The veteran defenseman should continue to play top minutes for Montreal this week and is worth a pickup if you need help on the blue line.

Gallagher also missed almost a month with a lower-body injury and has returned with a bang. The winger has one goal and four assists for five points to go along with four shots on goal and five hits in three games. He should continue to get opportunities to put up points on the top power-play unit while playing on the third line at 5-on-5.

Dvorak is available in a lot of leagues despite his recent “hot” streak. He plays on the third line and top power-play unit, just like Gallagher. He only has 24 points (10 G, 14 A) in 46 games this season, but it’s picked up as of late with eight points (3 G, 5 A) in his last nine games. Dvorak missed nearly two months from January to March but seems to be finding his footing again.

The Jets are the other team playing on three lighter nights this week thanks to them and the Canadiens facing off in the lone game on Monday night. Unfortunately, most of Winnipeg’s fantasy-relevant players (Kyle Connor, Mark Scheifele, Nikolaj Ehlers, Pierre-Luc Dubois, Neal Pionk, Blake Wheeler, and Josh Morrissey) are rostered in at least 68% of leagues. That doesn’t leave many options for this week, but there are still a couple.

Stastny plays on the top line with Scheifele and Ehlers, which inherently gives him some value. He has six points (1 G, 5 A) in his last nine games and should pick up at least a point or two this week. Who knows, maybe the Jets can get hot with Stastny going on a run.

For those of you in leagues with hits and blocked shots, Dillon is your man. He only has 19 points in 69 games, but he makes up for that with 191 hits and 95 blocked shots. It won’t be much, but those few extra points could be the difference.

The Islanders are one of a handful of teams that play on two lighter nights this week, and one of two teams with two light nights and four games overall. Due to New York’s disappointing season, there are some players worth picking up for this week.

The Islanders captain plays on the top line and power-play unit. He has 25 goals and 16 assists for 41 points in 65 games this season and has gone a bit cold recently. Lee only has one assist in his last six games, but he’s capable of going on a hot streak. He had 18 points (11 G, 7 A) in 11 games from March 7th to 26th. If he can regain that form, you’re going to be thankful that you scooped him up.

Nelson also plays in top situations for the Islanders and has had more success recently. He is riding a three-game point streak and has 13 points in his last 11 games. Given the Isles’ schedule and Nelson’s recent play, he’s likely a guy that I’m going to target this week.

Pulock will fill up the stat sheet for you. In the past two weeks, he only has two points but also has 17 shots on goal, 10 hits, and 22 blocked shots. He’s been bumped off the top power-play unit by Noah Dobson, but still has plenty of value on the blue line in deeper leagues.

The Flyers are in the same position schedule-wise as the Islanders with four total games, including two on lighter nights this week. Only Ivan Provorov and Cam Atkinson are rostered in 50% of leagues or more, so there are plenty of options to choose from.

You probably haven’t noticed it, but Kevin Hayes has stepped up in a big way for the Flyers over the past month. He dealt with injuries earlier this season but appears to be close to 100% now. Since returning from injury on March 5th, Hayes has 17 points and 49 shots on goal in 18 games. In his past five games, he has five points and 21 shots on goal. A healthy Hayes can help you win in the playoffs.

Sanheim has been the Flyers’ most consistent defenseman this season and he also brings fantasy value. He’ll jump up into plays to help produce chances and offense. He has six points in his last eight games and nine in his last 14 contests. Sanheim is a good pickup on defense in deeper leagues.

Along with the above four teams above, the Columbus Blue Jackets and Florida Panthers play three times this week including twice on lighter nights.

The Vancouver Canucks only play twice this week.