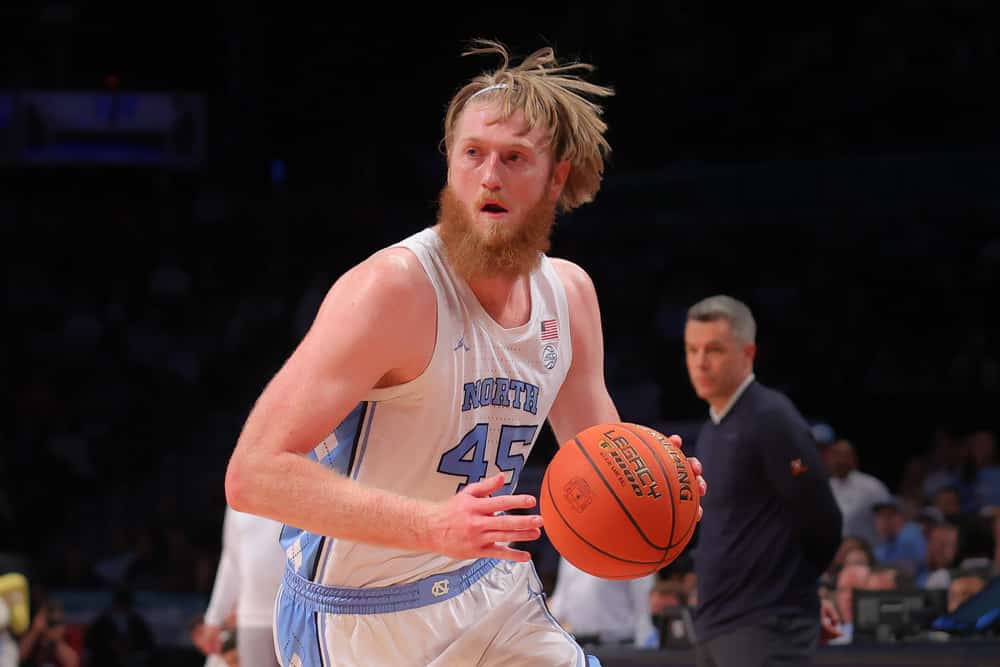 Just like that and Thursday night is in the books with four teams advancing to the Elite 8. Check out the CBB DFS column from Thursday night here. Not to toot my own horn, but it was a very nice lineup given out. Now we’re moving on to Friday. Again, we have a four game slate so you can’t afford any roster misfires. Allow me to help you navigate the high dollar guys and bargain bin players. Let’s do this!

Let’s start off by saying that I plan on fielding a unique lineup for Friday. I’m fully leaning into the two games with the highest expected amount of points and that’s UNC/UCLA and Kansas/Providence. That wasn’t my intention when I started building the roster, I just like the value of the players on these teams more.

With that said, my most expensive guard is Johnny Juzang at only $6.3K. Especially at this position, I went with the balanced approach rather than a Stars and Scrubs philosophy. Although the Bruin guard has two straight games putting up 26 fantasy points, we have yet to see the quintessential Juzang tournament game. I’m betting we see that Friday against a lackluster Tar Heel defense.

We’re staying on the same team for my next backcourt player and that’s UCLA’s floor general, Tyger Campbell, for only $300 less. Campbell is a model of fantasy consistency, scoring between 20 and 25 points in each of the last four games.

Tyger doesn’t have the highest of ceilings but I usually like to mix dependable guys with players who could go off. Again, I expect a ton of fantasy points to come from this game and the price is right for the UCLA point guard.

Where Campbell might be Mr. Dependability, Remy Martin is a wild card that could pay off big time. First, a price tag under $6K is too low for a guy that’s averaged over 31 fantasy points over the last three games. Against Creighton, Martin logged 29 minutes which was his most in 2022. With the extra court time, the veteran delivered by dropping 20 points with 7 boards and 4 assists. Providence’s defense is nothing to write home about so expect another stellar performance for the underpriced Jayhawk.

That’s right – I’m paying up for the most expensive guy on the slate. Armando Bacot is pricey but he has a 50-60 point upside with a fantasy floor of probably 30 points. UCLA has a decent size on the interior but those guys can’t hang with Bacot. The big man will get his per the usual.

Bacot has four straight double-doubles and has reached double figures in both points and rebounds in eight of his last nine games. There’s not a safer bet for production on this slate. Don’t get cute and try to save money on anyone else.

While we’re talking about big men, let’s go ahead and roster the other UNC frontcourt player – Brady Manek. Manek has been really coming on of late averaging 27 points over the first two tournament games. The Oklahoma-transfer has been a revelation for the Tar Heels and is the best outside-shooting big man in the country. Furthermore, him a Bacot compliment each other perfectly and are both capable of having monster games at the same time.

Name something @BradyManek can’t do… 🤔

I told you I only focused on a couple games and after all, somebody has to be on the court trying to guard Bacot and Manek. UCLA will throw a couple big man at them but Cody Riley starts and gets the most minutes. So far in the NCAAs, the senior has been playing about 25 mins per game and averaging 17.5 fantasy points per game.

Look for Riley to exceed these totals as UNC almost always plays two bigs on the court at the same time. Riley will have his hands full but he’ll hold his own and put up some fantasy points as well. I’d expect close to double digits in points and rebounds all for only $4.5K

As you can see, both of my Utility guys are Providence Friars. There should also be plenty of fantasy production in the Providence/Kansas game and I expect 4X or 5X performance from both players. Al Durham has been getting 30+ mins of court time recently and averages 23.5 fantasy points per game on the season. He’s the Friars second leading scorer but will also register rebounds and assists while being their best perimeter defender. He’s an all-around stat sheet stuffer who will get plenty of opportunities vs Kansas.

Rostering Ed Croswell is similar to my Cody Riley play but he’s even less expensive. Much like UNC, Kansas regularly plays two bigs which should give Croswell more minutes than usual. He’s already been averaging 19 MPG and over 19 fantasy points per game in the tournament (higher than his regular season averages) and this is a plus matchup. We should see another game where Croswell gets close to 20 fantasy points.