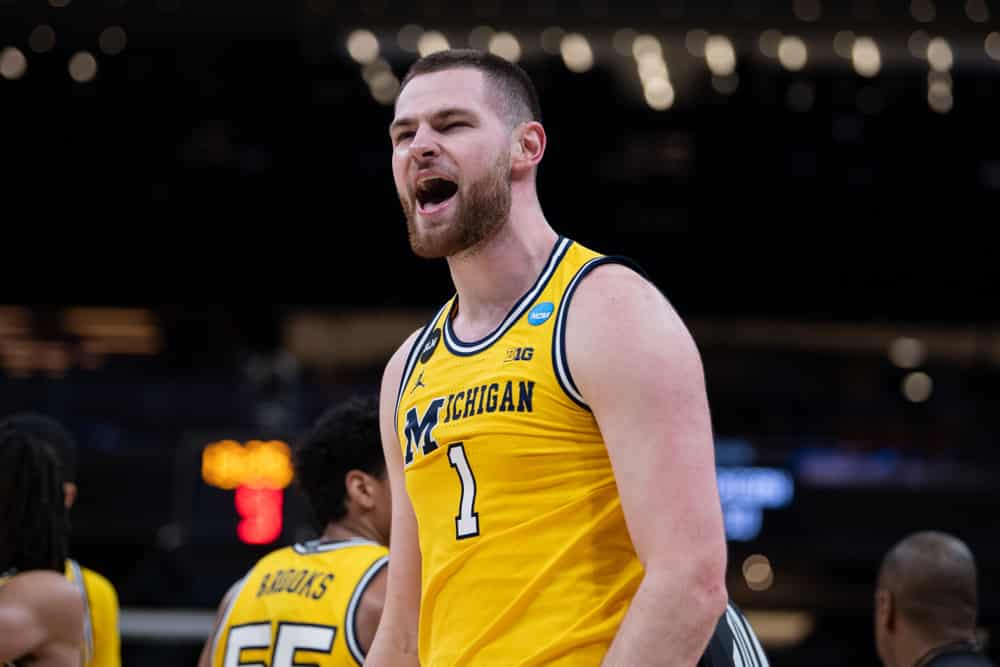 After four days off, college basketball is back and so is DraftKings CBB DFS. With only four games per day on Thursday and Friday in the NCAA Tournament Sweet 16, every lineup selection matters. Allow me to offer my advice on which top dollar players and which bargain-bin options you might want to target. In these columns through this weekend, I’ll be giving the main lineups I’ll be playing. Let’s do this!!!

For my most expensive player at the guard spot, I like Houston’s Kyler Edwards. Not only is he the Cougar’s leading scorer, but he also is the team’s second-leading rebounder and second in assists. He does it all for Houston and comes in averaging over 39 fantasy points per game over the last 4.

Arizona is a respectable 19th on KenPom’s Adjusted D but hasn’t looked great in this tournament. In Round 1, Wright State had three guards score in double figures against the Wildcats and TCU’s Mike Miles dropped 20 on them in Round 2. Additionally, only picking the 5th most expensive guard on the slate, allows me to save money for the big men.

For a guy who’s been north of 27 fantasy points for four straight games, a $5.8K price tag for Arizona’s Dalen Terry is too low. There’s a lot of star power on this Arizona team which means Terry regularly flies under the radar. He should get at least 30 minutes of playing time and chips in with almost 5 RPG and 4 APG. Against UCLA in the PAC12 champ game, the sophomore put up 15 points, 7 rebounds, and 7 assists.

Jeremy Roach seems to have solidified his spot in the starting lineup for Duke which moves Trevor Keels ($5.3K) to the bench. In this tournament, Roach is getting 36 minutes per game compared to only 23 minutes for Keels. DK has the pricing backwards. In addition to hitting a huge 3 to secure the win vs Michigan State, Roach went for 23.5 fantasy points and his price only went up $100 bucks.

I realize that Texas Tech has the top-rated defense in America and their length on the perimeter gives opposing guards fits but Duke will still find success on offense. It’s hard to find another guy at this price who starts at PG for a top 5 offense in America.

With a couple very attractive options at the forward spot, I plan to spend up at the position. That’ll start with Michigan’s big man Hunter Dickinson. Big Dickinson Energy is currently doing everything for the Wolverines and he just put up 27 points and 11 rebounds against a top 5 Tennessee D.

Villanova’s D is only ranked 30th in the country and they are short on big men. Eric Dixon is only 6’-8” and if he’s not on the court, Andrew Slater is only 6’-7”. They’ll both struggle to contain the 7’-1” Dickinson. Additionally, with Dickinson adding a 3pt shot to his repertoire, he’s become increasingly difficult to double. Expect another huge game.

I love pairing up Dickinson with Gonzaga’s Drew Timme. The Zag’s big man is playing the best basketball of his career and he’s been over 50 fantasy points in both tournament games. Furthermore, the matchup vs Arkansas looks like a tasty one. The Razorbacks regularly go with a four perimeter player lineup with only 6’-11” sophomore Jaylin Williams down low.

Williams won’t be able to contain the crafty veteran and if he gets into foul trouble, this game could get ugly. I’m riding the hot hand with Drew Timme and I think the price is more than fair at only $8K

If you recall last year’s tournament, then you remember Kevin Obanor at Oral Roberts dropping 30 points on Ohio State and following that up with 28 points vs Florida. He transferred to Texas Tech and while he’s had a solid season, he’s really been coming on of late. Back to back double-doubles in Round 1 and Round 2 and now he faces a Duke defense that is really struggling. This price is just flat-out too low. There’s just something about March that Obanor seems to really love.

I had to get a piece of Villanova’s offense playing a limited Michigan defense that’s only ranked 77th in the country. I would have preferred to fit Collin Gillespie ($6.9K) or Jermaine Samuels ($6K) but I didn’t have enough coin. Therefore, I’ll fall back on senior guard Caleb Daniels.

Nova is not a very deep team (318th in the country at bench minutes) so expect Moore to at least get 30 minutes of court time. He’s been in double figures in both tournament games so far and also came down with 8 boards vs Ohio State. The price is right to take a chance on Caleb Daniels.

Look, you’re gonna have to roster a low-priced guy if you want to spend up on players like Dickinson and Timme. For me, that guy is Arkansas’s Au’Diese Toney. First, this game has the highest Total of all four matchups so expect a ton of fantasy points to go around. Second, while Toney has only put up 10 and 14 fantasy points in the last two games, at least he’s played all 40 minutes in each.

It was just a few games ago where the Pitt-transfer put up 22 and 10 vs LSU in the SEC tournament. No other player in this price range will get the minutes that Toney will nor have his upside. At only $4.4K, he’s almost a must-roster.