The USFL completed its first round of the draft in an extremely fast-paced whirlwind!  Much like any draft we had drama.  We had surprises.  We had guys taken before you expected and guys still out there you think should have already been drafted.  The picks came in faster than you could react, so it is time to reflect on the players selected. On Day One the USFL teams selected quarterbacks, edge rushers, and defensive backs.

DAY TWO OF THE USFL DRAFT LIVE STREAM IS HERE 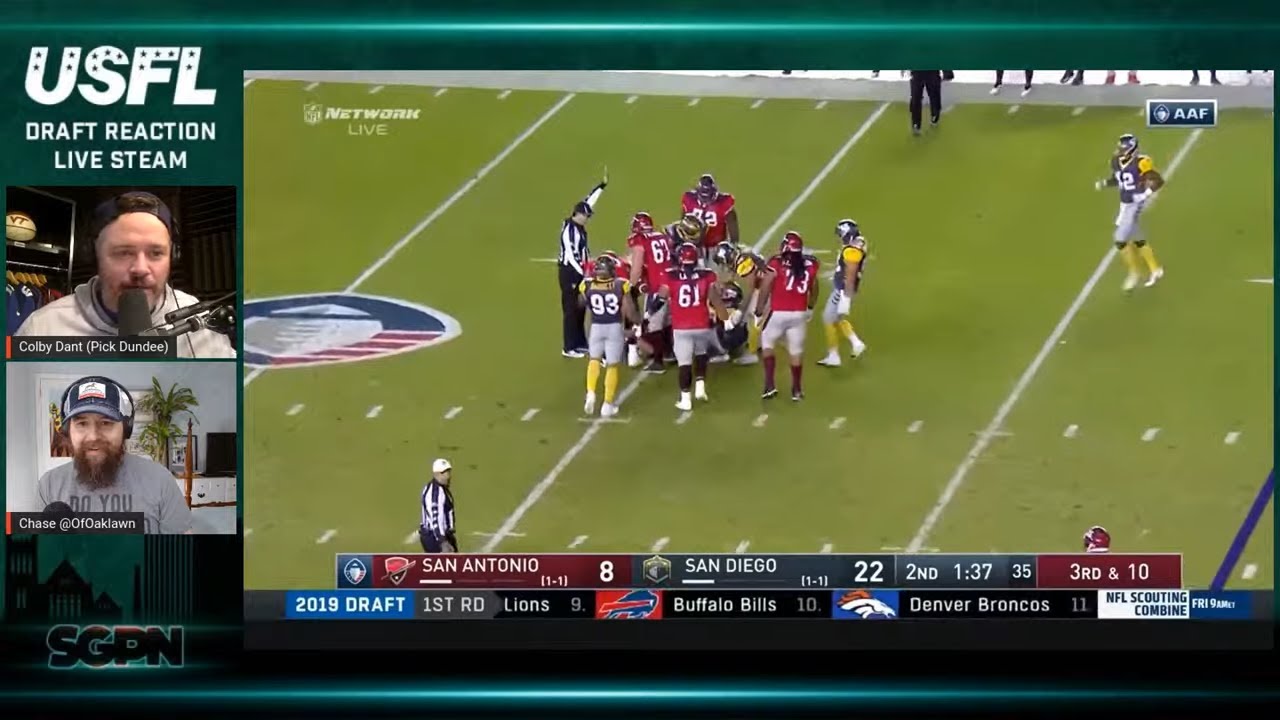 What Positions Were Drafted on Day 1 of the USFL?

The biggest surprise on the Day 1 of the USFL was Shea Patterson going number one.  The Quarterback out of Michigan gets his chance to start again and prove himself at a professional level in a return to Michigan.  The Tampa Bay Bandits may have gotten a steal in Jordan Ta’amu.  While he never had the opportunity to really flourish in the NFL, he has elite arm talent and the ability to throw on the run.  Ta’amu threw for 3,918 his senior year at Ole Miss, finishing second in the SEC behind only Tua Tagovailoa, who played three more games.

Other names taken were TSL MVP Bryan Scott.  Another quarterback popular in the Spring League was Ben Holmes who went to the Generals.  Clayton Thorson and Alex McGough were taken next, both surprises in round 1 of the USFL draft.  To close up round one of Day 1 of the USFL, two players who have had some NFL chances, Kyle Lauletta and Kyle Sloter were taken.  They’ll both look to make the most of their additional chance in professional football.

In round two of Day 1 of the USFL, defensive ends started flying off the board quicker than they fly after quarterbacks on the field.  Round two may have brought one of the best feel-good stories as brothers Aaron Adeoye and Adewale Adeoye will both get an opportunity to prove themselves on the professional level.  Another guy taken, Freedom Akinmoladun, had a great college career at Nebraska.  He was a four-year starter who finished with 16 tackles for losses, 12 sacks, and 106 total tackles.

Other names taken in the 2nd round were David Bellamy and Carlo Kemp.  The Gamblers took Chris Odom and the Generals followed it with Chris Odom.  Bryson Young was taken just before Akinmoladun, which was a surprise to me. Finally, Alabama defensive end Mekhi Brown was taken by the Tampa Bay Bandits.  Brown was a four-star prospect with good length and burst and a lot of untapped potential.

Day 1 of the USFL kept pushing along with Cavon Walker being taken by the Panthers.  The Bandits followed them, picking Michael Scott.  No, not the one from The Office.  Gus Cumberland was taken by the Stars and Kolin Hill by the Generals.  A player to watch is Nasir Player.  He isn’t a household name, playing at East Tennessee State but in college, he had 40 starts, 182 tackles, 40 tackles for loss, 18.5 sacks, and 5 forced fumbles.

Other names drafted in the 3rd round were Kolin Hill from Texas Tech.  He has experience at both defensive end and linebacker positions.  Ahmad Gooden was taken by the Gamblers after him. Followed by Chauncy Hany.  The last pick on Day 1 of the USFL at the end of round 3 was Anree Saint-Amour.

The final round of defensive ends on Day 1 of the USFL saw several names we weren’t as familiar with go.  James Folstno Jr. and Eric Assoua were the first two taken.  Seth Thomas was taken by the Stallions, followed by Drequan Brown.  Somebody with the most untapped potential is Malik Hammer, drafted by the Generals.

A player I’m looking forward to seeing get another shot is Chase Demoor out of Central Washington.  He’s a strong player with good finesse moves and quick snap-off-the-line.  DeMoor is most recently known for his appearance on the Netflix dating show “Too Hot to Handle”.  Other names taken in the 4th round on Day 1 of the USFL were Adam Shuler, Nigel Chavis, Jonathan Newsome, and Carroll Phillps.

The first offensive tackle taken on Day 1 of the USFL is also one of the most interesting.  Chidi Okeke didn’t play football until 2013 when he moved here from Nigeria.  He was a 5-star prospect at LSU and has bounced around different practice squads in the NFL.  Taken after him were Darius Harper, Brandon Hitner, and Paul Adams.

Keeping the big boys moving right along Keith Williams and Garrett McGhin were taken next.  And finally in the first round of offensive tackles on Day 1 of the USFL Blake Alan Camper and Tyler Catalina were taken.

The offensive tackles kept flying off the board and the first in round six on Day 1 of the USFL was Corbin Kaufusi.  Calvin Ashley and Teton Saltes were also taken in the sixth round. Isaiah Battle, who played at Clemson was taken at the end of the round.  He has had some controversy but is a talented player who could flourish.

O’Shea Dugas, Avery Gennessy, and Donnell Greene were taken in round six on Day 1 of the USFL Draft.  One of the names to watch, taken by the stars is Michael Rodriguez III.  A three-year starter at Louisiana Tech, Rodriguez has long arms and the athleticism of a tight end.  I expect him to be a great offensive tackle in the USFL and to have a great year.

Keep building through the trenches.

The last round of offensive tackles on Day 1 of the USFL draft started with the maulers taking Charles Baldwin.  Baldwin is a 6-5, 305-pound tackle who spent time at Alabama and Kansas before ending with Youngstown.  He was a 4-star recruit and this may just be the chance he needed.

There were plenty of names in round seven that weren’t as well known but don’t let that deceive you.  These big guys can all play and will all look to make the most of this professional opportunity.

The first round of quarterbacks went in round 8 on Day 1 of the USFL Draft. We saw USFL teams move away from the long lanky cornerbacks and go with some cornerbacks that are more around six feet or under and bring a lot of speed.  Delrick Abrams was the first cornerback taken, followed by Channing Stribling.  Many of the names may have been unknown but Jamar Summers was one we did know.  He has excellent ball skills and will give wide receivers and quarterbacks problems.

The next round of cornerbacks on Day 1 of the USFL Draft had more speedy cornerbacks taken.  Terrell Bond was first off the board, followed by Tae Hayes.  The Gamblers took Will Likely and Breakers took Derrick Jones.

Jameson Houston from Baylor has had some time moving around NFL teams. He’ll now get another opportunity at the professional level to show his skills and show that he’s an NFL-caliber corner.  Trae Elston, Marcus Lewis, and Davante Davis.

Another lockdown corner joins the crew 🔒

More cornerbacks with speed were taken in the tenth round on Day 1 of the USFL Draft. Christian Campbell was first off the board followed by Mazzi Wilkins.  The Generals then selected David Rivers, followed by Dominique Martin.

Manny Patterson was drafted by the Breakers, and then Howard Wilson by the Gamblers.  Byran Mils and Prince Robinson were the last guys taken.  Christian Campbell played at Penn State before playing for the Rough Riders.  He had stints with the 49ers as well.  A 6th round pick, it is great to see Campbell get another opportunity to play at the professional level.

In the last round of cornerbacks on Day 1 of the USFL Draft, Jaylon Mclain-Sapp was taken by the Maulers.  Lorenzo Burns and Jerry Cantave were taken next.  The Breakers then drafted Ja’len Embry, who was followed by Jalin Burrell.

Other names like DeJuan Neal and Bradley Sylve were taken, followed by Rashard Causey.  The last cornerback taken on Day 1 of the USFL Draft was Isaiah “Ike” Brown from Florida International.  Brown is a great man-to-man cornerback.  He stays very physical with wide receiver.  He lowers his shoulder and delivers hard hits and will be a nightmare for wide receivers.

We have added another CB selection and will pass on a pick in a future round, as a result. pic.twitter.com/MUKrmHvQ3A

In the last round on Day 1 of the USFL Draft, teams got to go back to taking quarterbacks.  It was a big win for some guys from smaller schools who deserve more opportunities such as Josh Love and J’Mar Davis-Smith.  Kenji Bahar was also taken.  The Stars took Case Cookus and the Bandits took Brady White. With some strong second quarterbacks taken here, the USFL may have some quarterback competitions.

While Paxton Lynch will overshadow this round, De’Andre Johnson is a player to keep an eye on.  Johnson was supposed to take over from Jaemis Winston at Florida State before an unfortunate event had him removed from the team.  He finished his college career at Texas Southern throwing for 1,927 yards as well as rushing for 180 yards.

Ending the day how we started it: with a 🔥 QB selection!

Day 1 of the USFL Draft

That’s the end of all the players taken on Day 1 of the USFL Draft.  Day 2 returns tomorrow with rounds 13 through 35.  Sports Gambling Podcast will be live streaming coverage through the very last round.  Make sure you tune in early and get all the expert analysis, reactions, interviews, and more. With a whole new crop of USFL quarterbacks ready to roll, the 2022 season will be special.

Check out the Full FIVE HOUR USFL Draft Show from SGPN Below and be sure to tune in for Day Two starting at 9:45 AM Eastern on February 23. 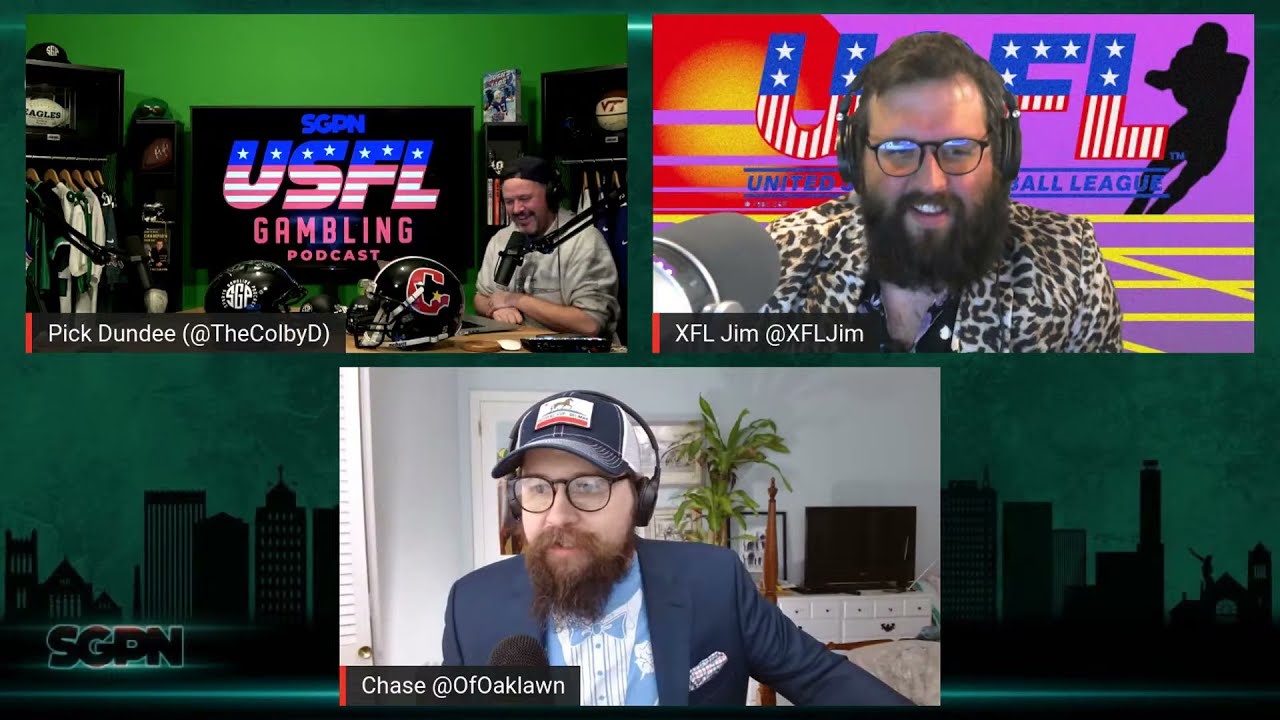