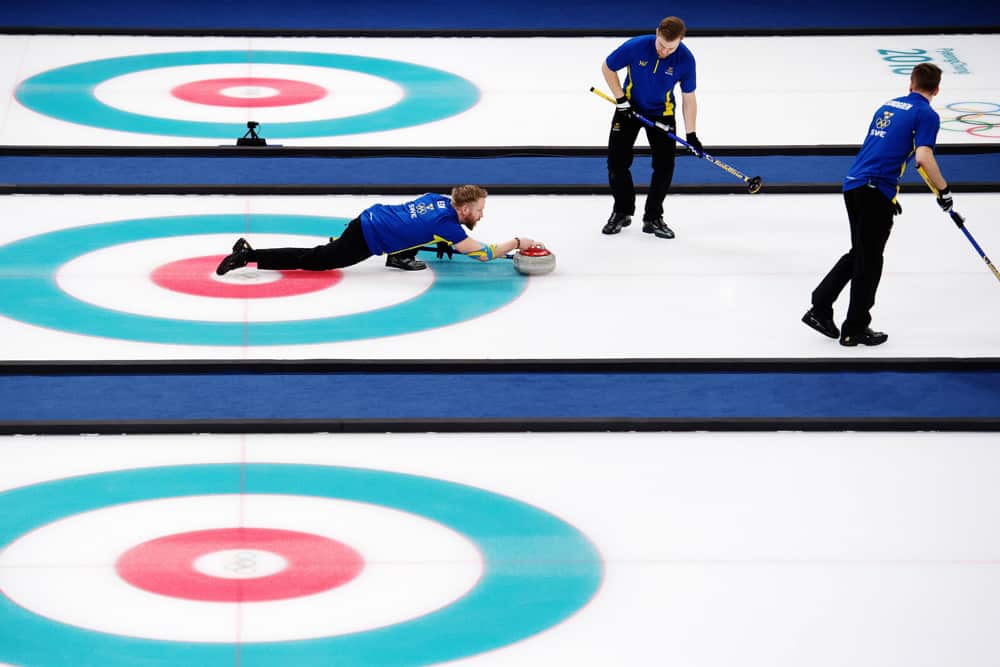 It will be a quick turnaround for the men’s Olympic curling teams in the medal round at the 2022 Olympics. The last draw of the round robin took place Thursday morning in Beijing and the semifinals will get underway Thursday night (7:05 a.m. EST Thursday in North America). That’s not a lot of time for teams to gather themselves before going from the frying pan of the round robin to the fryer of the medal round. However, all four teams did play in that last draw, so none of them will have the advantage of extra rest. Bettors aren’t going to find any value in two favorites in the semifinals.

How to watch: NBC, NBCOlympics.com, PeacockTV

Great Britain Storylines: Can Bruce Mouat continue his incredible year-long run for two more games? His men’s team has finished first or second in every major tournament its entered the last 12 months. If there was any doubt about his form after losing the semifinal and bronze medal game in the mixed doubles Olympic tournament, Mouat answered that in the round robin. He was one of the top skips by shooting percentage and led Team GB to the No. 1 seed in the medal round. Their lone round robin loss game in their second game against the US when Mouat had by far his worst game. He struggled mightily with draw weight in that meeting with the Americans, shooting just 63 percent on draws. He’ll get the chance to avenge that loss in the semifinals. Mouat has actually dropped his last three games against Shuster in 10-end games: The round robin, the 2021 worlds and the 2019 worlds.

United States Storylines: The USA enters the 2022 Olympic medal round with the same record they had entering the 2018 medal round when they won gold. However, this time they’re the No. 4 seed. Contrary to the 2018 games, Team Shuster doesn’t enter the medal round on a roll. It was a roller coaster ride that saw them beat Team GB to start 2-0, fall to 3-3, win a huge game against Switzerland and then drop a head-scratcher to Italy. Shuster’s had to throw a lot of save shots throughout the tournament and whether he’s been able to make all of them in a game has usually dictated the team’s result. If you want to talk about a team’s results being greater than the sum of its parts, it’s definitely been Team USA. All four players have been in the bottom half of shooting percentages, but here they are two wins away from an unprecedented repeat gold medal. That’s kind of the story of this team. Shuster has a good record against Mouat, particularly in international events, but they’ve always been close. This will be a barn-burner.

Sweden Storylines: After starting 7-0, Sweden enters the medal round on a two-game losing streak. The strength for this team all tournament has been third Oskar Eriksson. All eyes will be on Niklas Edin as he goes for a gold medal that would complete his CV. But when Eriksson is setting the table for Edin and he doesn’t have to make his trademark runbacks to save the team is when they’re unbeatable. Edin’s all-time record isn’t great against Gushue, but it’s been a lot more even during this quadrennial. Edin got the best of Gushue in the round robin in a game where Gushue shot a jaw-dropping 57 percent.

Canada Storylines: Canada limps into the medal round coming off back-to-back losses to Russia and Great Britain after a struggle against China. The pressure is on Team Gushue to come through for Canada after they failed to medal in the 2018 Olympic tournament and then saw the mixed doubles team in Beijing miss the medal round by a millimeter. Is the pressure starting to get to this team? Gushue complained about the ice conditions late in the round robin and was getting a little short with his teammates on the mic in the last round robin game. This team wins with precise rock placement that gives them favorable angles. That’s been a little off through the round robin, but if Gushue and company have the ice and rocks figured out (like it looked like they did against the US) that could spell doom for their opponents, regardless of their form coming into the medal round.

Bettors beware. The two big underdogs, USA and Canada, both have good head-to-head records against their opponents in the semifinal and already have Olympic gold medals to their names. The value proposition might be taking one of them to win their second gold. But this is Niklas Edin’s time to shine. Despite dropping their last two games, those games weren’t played under the pressure of needing to qualify for the medal rounds. This is still Edin’s chance to cement his legacy as one of the greatest curlers of all time and despite Britain’s form, this is his gold to lose.