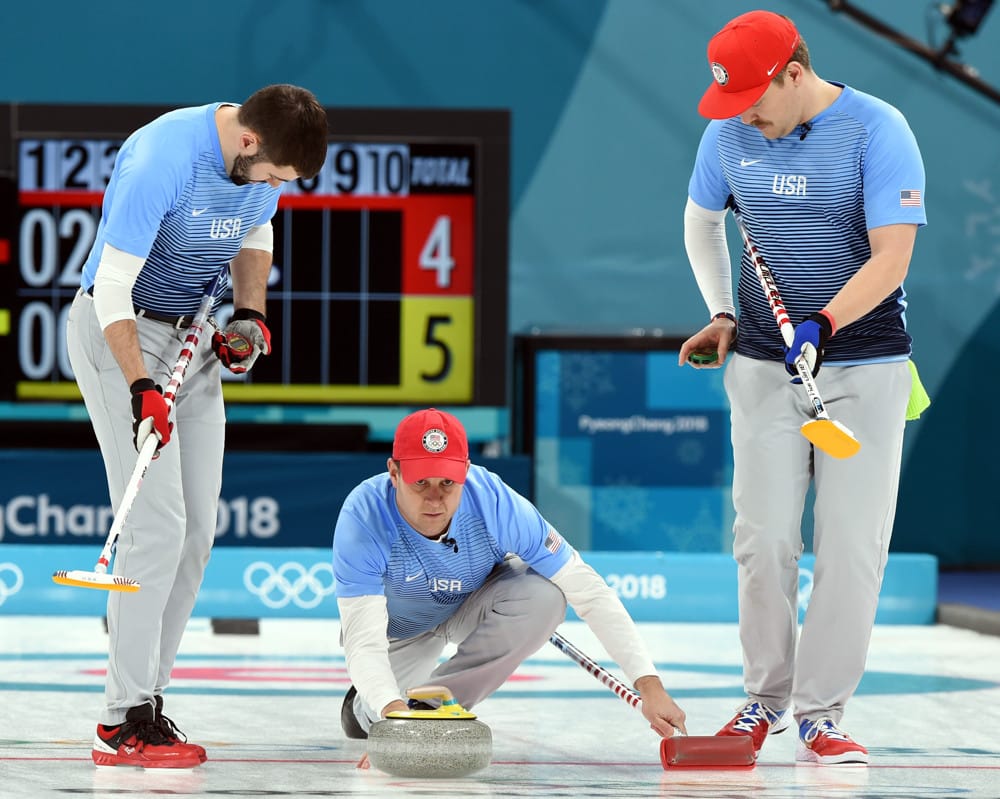 Two of the most-decorated male skips in curling history will look to cement their legacy at the 2022 Olympics. The top-heavy men’s field also includes the defending gold medalists from the United States and a team that has finished first or second in every major competition in the last 12 months. The Men’s Olympic Curling event gave us an amazing story and competition in 2018 and we hope for more as we preview the betting odds and more. The Men’s Competition starts on February 9.

Also, be sure to check out our Mixed Doubles Preview as well!

[Note: Team rosters are as of Jan. 28, 2022, and are subject to change based on results of COVID-19 testing when the athletes arrive in Beijing.]

Who they are: Gushue and his third, Mark Nichols, burst onto the curling scene in 2006 when they came seemingly from nowhere to win gold at the Torino Olympics. Since then, they have been one of the most dominant teams on tour. They’ve won three of the last five Canadian men’s championships (The Brier) and also claimed the 2017 world championship. This team relies on superior rock placement that gives them advantageous angles that allow them to take advantage of their opponent’s mistakes. Eventually, the pressure builds and builds until they’re able to capitalize and put up a big score in an end.

How did they get here: Canada claimed a spot in the Olympics when Team Brendan Bottcher finished fourth in the round-robin at the 2021 worlds. Team Gushue became Team Canada when they won the Canadian Olympic trials, beating Team Brad Jacobs (the 2014 Olympic gold medalists) in the final.

Outlook: Contender. They’ll be one of the favorites, along with Great Britain and Sweden. If you can get them at +250 or more, pounce on it because that’s as long as you’ll find them. Canada is synonymous with curling and they are early betting favorites to win the Men’s curling gold at the Olympics.

Who they are: Ma is a somewhat surprising choice as skip if that is indeed how China lines up. He regularly represented China as a junior and in university through 2013, but has only been seen twice on the national team since (once was as an alternate). Zou Qiang, the announced third, skipped China at the last two world championships and went a combined 4-21.

How they got here: As host, China was guaranteed a spot in the field. China selected a team from the group of players in its high-performance program.

Outlook: Darkhorse. The longest of shots. Maybe worth a flier to medal on home ice. Curling odds are about finding the longshot value and China to medal is a fun bet.

Who they are: Prior to the 2021 Worlds, Danish curling selected a team from all of the players in the national high-performance program rather than have individual teams playoff for the right to go to Worlds. The first iteration of this team featured second Mads Nørgård as skip, but Krause now throws fourth stones and calls the shots. Like the Danish women’s team, the men’s team also has a reputation for punching above their weight class but have never made playoffs at an Olympics.

How they got here: Denmark was the last team to punch its ticket to Beijing, beating the Czech Republic in the last qualification final at the Olympic Qualification Event.

Outlook: Darkhorse. The experience here will serve them well for a run in 2026, but it would be a huge upset for this team of first-time Olympians to make the playoffs.

These runbacks he’s made are ridiculous. Made it look easy for two.

Who they are: Scotland’s Bruce Mouat and team make their Olympic debut after steadily rising up the curling rankings the last four years. This is probably the hottest team in the world. They’ve finished first or second in every major competition they’ve entered the last 12 months.

How they got here: Won silver as Team Scotland at the 2021 worlds to qualify for the Olympics.

Outlook: Contender. They’ll be one of the favorites. In fact, DraftKings has them as THE favorite for gold at +200. If you can find +250 or +300 somewhere then there’s a lot of value in backing Bruce. Scotland invented curling and are rightfully the favorites to win the Men’s gold at the Olympics.

Who they are: Italy has come a long way as a curling nation since Retornaz first skipped them at the 2006 Olympics. They’ve staked their claim as the best of the “next tier” of European teams behind Scotland, Sweden, and Switzerland and have won two bronze medals at European Championships during this Olympic quadrennial. One thing that has eluded them so far is a playoff spot at a Worlds or an Olympics.

How they got here: Italy beat Denmark in the first qualification final at the Olympic Qualification Event.

Outlook: Darkhorse. They’re usually good for a big-time upset during the round-robin, but making the playoffs will be a tall task. Pay attention to how third Amos Mosaner plays during the mixed doubles event. If he’s shooting lights out, maybe look at betting on that form to carry over and taking advantage of long odds to medal.

Who they are: If you are anticipating seeing the Norwegian team’s colorful curling pants at these games, you are going to be disappointed. The skip of that team, Thomas Ulsrud, is no longer playing and Walstad, who spent years playing second-fiddle to Team Ulsrud, gets his first shot at skipping an Olympic team. They’re not inexperienced, though. Third Torger Nergård is competing in his sixth Olympics.

How they got here: Norway won the round robin at the Men’s Olympic Curling Qualification Event to book their spot in the field.

Outlook: Darkhorse. Like Italy, they’re among the best in Europe among countries whose name doesn’t begin with S. They’ll be in the mix for a playoff spot, but I don’t think they’ll break through.

Who they are: A consistent under-performer at the international level, Glukhov was the surprise of the 2021 worlds when his team went 11-2 in the round-robin. However, they lost both the semifinal and the bronze medal game. A lineup change and improved support system has this team playing with a lot of confidence. Recently, Glukhov secured promotion for Russia at both the European B event and the World Qualification Event. However, those tournaments didn’t offer nearly the strength of field he’ll be up against here.

How they got here: Finished fourth at the 2021 world championship.

Outlook: Darkhorse. Digging deeper into the stats from the 2021 worlds, Glukhov didn’t have games where he just straight up stole games by being on fire. Rather, the entire team played remarkably consistently and then took advantage of other team’s misfortunes. If lightning strikes twice they could be in contention for a playoff spot.

Who they are: The only thing missing from Edin’s CV is an Olympic gold medal. He has a bronze from Sochi and a silver from PyeongChang. He is out to redeem himself after giving up the infamous 5 in the 8th of the 2018 gold medal game against the United States. For the last four years, this team has consistently built and peaked for the biggest event on the international calendar. They’ve won the last three world championships and the fact they haven’t had an outstanding season so far should make them that much scarier.

Outlook: Contender. Sweden, Great Britain, and Canada will have the shortest odds in the field. There’s value in anything longer than +250. Edin is a threat to win anytime he is on the ice and these odds to win gold make them a nice choice to lay some action on.

Who they are: After winning bronze at the 2018 Olympics, de Cruz added Sven Michel, an accomplished skip in his own right, to play third. Curling’s human highlight reel, Benoît Schwarz, throws last rocks while de Cruz throws second. This team was put together to win an Olympic gold, but has not broken through at the international level this quad. They have two world bronze medals and, amazingly, no European medals since the last Olympics.

How they got here: Won bronze at the 2021 worlds. Then beat Team Yannick Schwaller 4-0 in a best-of-seven playoff to decide the Swiss Olympic team.

Outlook: Contender. There is a ton of value in betting Switzerland to win gold, especially if you see them in the +800 range. This team hasn’t put it together in an international event yet but they are too talented to be at that long of odds. The Swiss are a threat to win gold and almost a lock to medal as we preview the Men’s Olympic Curling betting odds.

John Shuster with the double to tie it up! https://t.co/crSmtNeRXW pic.twitter.com/thwidaBzQT

Who they are: The champ is here. John Shuster is back in his fifth consecutive Olympics, fourth as skip, to defend his 2018 gold medal. It isn’t exactly the same team that represented the U.S. in 2018 as Chris Plys now plays third for the retired Tyler George. What they have going against them is the pandemic has kept them from playing the kind of consistent high-level competition they got going into the 2018 games. What they have going for them is dating back to 2016, Shuster has made playoffs in the last five major international events he’s entered as Team USA.

How they got here: Finished fifth at the 2021 worlds. Won the U.S. Olympic Trials by beating Team Korey Dropkin 2-1 in a best-of-three final.

Outlook: Darkhorse. And I feel like Team Shuster would prefer it that way. They’ve always been at their best when it’s the other guy who’s the front-runner. Even if it’s a homer bet, the +800 range for a repeat gold is pretty good value. The defending Men’s Olympic Curling gold medalists will be a fun team to get in on the betting action.