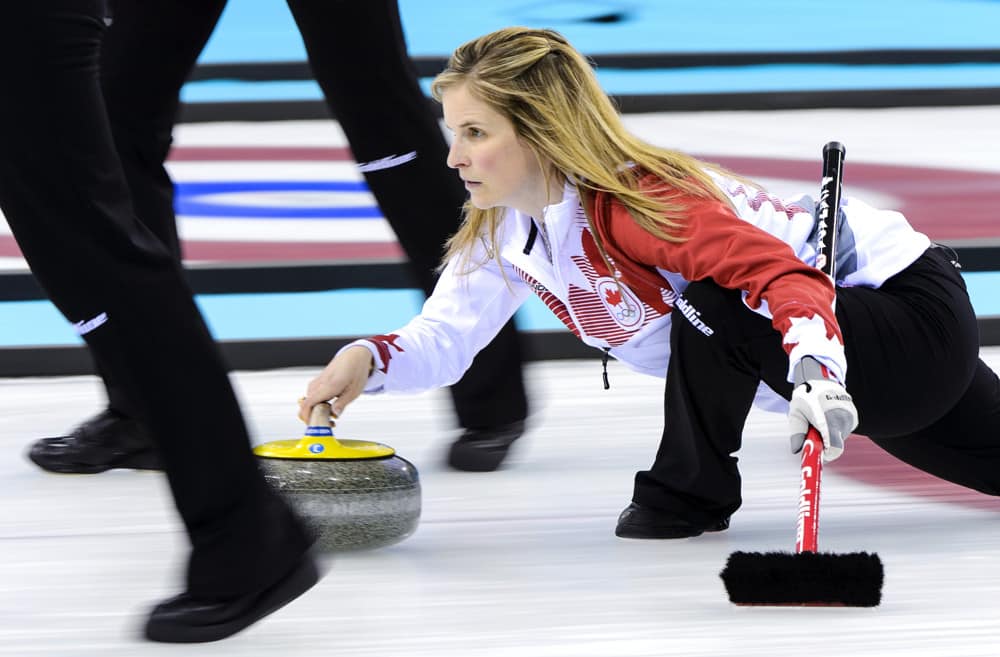 The women’s field at the 2022 Olympics features 10 teams that could all conceivably come away with a medal. This incredible field features all three medallists from 2018, the 2014 Olympic gold medallist, and a team that has won each of the last two world championships. For gamblers, it will be an incredibly difficult field to handicap. But there are some great opportunities if you’re looking for value. This is the most comprehensive Women’s Olympic Curling Preview for betting odds.

If you’re interested in learning more about curling, check out Rocks Across the Pond: A Curling Podcast. We recently released our Welcome to Curling series specifically for those new to the game who want to know the rules, jargon, strategy, and even history of this unique Olympic sport.

Who they are: Simply put, Jennifer Jones is one of the greatest curlers of all time. She owns the 2014 Olympic gold medal, six Canadian championships (Scotties Tournament of Hearts), and two world gold medals. Her team from 2014 is mostly intact with the exception of Jocelyn Peterman at second, who replaced the retired Jill Officer. They also added Lisa Weagle as a fifth player and you’ll probably see her at the lead at some point. If you’re a curling newcomer, this will be an exciting team to watch because they prefer an offensive style and a lot of rocks in play.

How did they get here: Canada qualified for the Olympics thanks to Team Einarson’s sixth-place finish at the 2021 worlds. Team Jones then won the Canadian Olympic Trials, beating Team Tracy Fleury in an incredible back-and-forth final.

Outlook: Contender. After a three-year run at the Scotties from 2019-21 that saw them miss the playoffs and then lose in two semifinals, this team was about as much of an afterthought as one of the greatest players of all time could be going into the trials. But here they are going for women’s curling history and a second Olympic gold.

Who they are: This is a very young team, led by Han, who led China to an impressive performance at the 2019 world juniors and followed it up by skipping them to gold at the 2019 Pacific Asia Curling Championship. Her game continues to mature, but 2026 might be her time instead of now. Wang Rui, who represented China in mixed doubles in 2018, has been added to this team at third.

How did they get here: As host, China was guaranteed a spot at the games. The Chinese curling federation selected a four-person team from the field of available players.

Outlook: Darkhorse. An extremely long shot, there’s value in betting them to medal on home ice.

Who they are: Team Dupont won only one game at the 2018 games, but it came against Canada. Dupont made her first appearance at the Olympics in 2010 and is back for her third games. After a pair of disappointing finishes at worlds, she paired with Mathilde Halse at third and had an impressive showing at the 2021 world championship in the Calgary curling bubble.

How did they get here: A surprising fifth-place finish qualified Denmark for these Olympics. Despite not having as many curlers as some of their peers, Denmark has qualified for every single women’s Olympic tournament and won silver in 1998.

Outlook: Darkhorse. They’re always good for an upset, but I don’t think there’s enough consistency to make the playoffs.

Who they are: Eve Muirhead is back for her fourth Olympics. The 2014 bronze medallist finished fourth in 2018. She had hip surgery shortly after PyeongChang and then missed much of the next season. We’ve seen her slowly round back into the Muirhead of old, culminating with an impressive performance on her way to gold at this fall’s European Championship. When Muirhead is on, this is an incredibly tough team to beat.

How did they get here: Won the round-robin at the Olympic Qualification Event. They, Japan, and Korea all finished tied for first with 1-1 records against each other. However, Team Muirhead had the best “draw shot challenge” score, which is the result of the pregame draw to the button each team does during an event to determine who gets hammer in the first end.

Outlook: Contender. A healthy Eve Muirhead is great for curling and it’s wonderful to see this team having success again.

Who they are: Team Fujisawa won bronze at the 2018 Olympics after losing a classic semifinal game to Korea. Remarkably, despite being one of the top-ranked teams on the World Curling Tour, Team Fujisawa has not been to a world championship since 2016. A different team has won nationals in Japan the last four years and Worlds were canceled the year Team Fujisawa won. Coming out of a competitive field will have this team ready for a competitive women’s curling field at the Beijing Olympics.

How did they get here: Became Team Japan by beating Team Yoshimura in a best-of-five Olympic trials series, 3-2. Yoshimura won the first two games and Fujisawa came storming back to become the Japanese representative. They then won the first qualification final against Korea at the Olympic Qualification Event.

Outlook: Contender for playoffs, darkhorse for gold. They’re one of the toughest teams in the field to steal against and their betting odds are some of the longer ones in this curling field. If they can play better without hammer they’ll be in the mix for a playoff spot.

Who they are: They are the best story among the curling teams at this Olympics. This team came seemingly from nowhere to finish 1st in the round robin at the 2018 Olympics and went on to win silver. But sadly, they did not get to enjoy their success and suffered abuse and corruption from federation officials. Those who wronged them are now behind bars and Team Kim is back at the Olympics. They went a long time without facing elite competition, but played a busy schedule in the lead-up to these games and had success. Team Kim is back and the curling world is better for it.

How did they get here: Became Team Korea by winning both of the first two legs of the Korean national championship in June. They steamrolled the competition, losing just one total game on their way to becoming Team Korea. Then they became the final team to book their spot in Beijing by beating Latvia in the second qualification final at the Olympic Qualification Event.

Outlook: Contender for playoffs, darkhorse for gold. Along with Russia, they are the value play for gold. They’ve made up for lost time and have played a ton of games this season which they hope will lead to the same red-hot start they had in 2018.

Who they are: This team established itself as the top Russian team shortly after the 2018 Olympics, where Victoria Moiseeva led Russia to a 2-7 finish. The rise of Team Kovaleva has been somewhat similar to that of Sweden’s Team Hasselborg prior to the last Olympics. They’ve improved steadily over the last quad and won silver at last year’s worlds. Kovaleva and her team have nice long odds but are a long shot to win a curling medal in the Women’s Olympic field.

How did they get here: Finished second at the 2021 worlds.

Outlook: Contender. Will this be their breakthrough similar to Sweden in 2018? Or will they need to wait another four years?

Anna Hasselborg won Olympic gold at #PyeongChang2018 by creating her own curling team, and she will be defending her title at #Beijing2022.

Who they are: The defending gold medallists from the 2018 Olympics are back with the same lineup. They’ve had an incredible quad on tour, winning five Grand Slam of Curling events in Canada since winning gold in Pyeongchang. But amazingly they still haven’t won gold at a world championship, winning silver in 2018 and 2019. This team embraced analytics before it became really widespread in curling and used it to their advantage four years ago along with great shot-making. The question is if the rest of the world has caught up in the five-rock era.

How did they get here: Finished fourth at the 2021 Worlds.

Outlook: Contender. They’re currently the favorite so there won’t be much value in betting on the defending women’s curling Olympic champions.

Who they are: Tirinzoni’s team went 4-5 at the 2018 Olympics and then added former world champion skip Alina Pätz to throw last rocks. Pätz is one of the most clutch last-stone throwers in the game and since joining Tirinzoni has added two more world championship gold medals to her CV.

Outlook: Contender. The two-time defending world champion is the fourth-favorite for gold at +500? OK, cool. Ride Tirinzoni and crew in the Olympics this year and cash those favorable medal odds in the Women’s curling tournament.

Who they are: This is the same team that represented the U.S. in PyeongChang, but with one key change. The skip of the 2018 Nina Roth is now at third with Tabitha Peterson moving to skip. The move was initially made at the start of the 2019-20 season when Roth went on maternity leave. But with Peterson in the house, the team had a fantastic season that ended with a national championship. When Roth returned to the team for the 2020-21 season, Peterson remained at skip.

How did they get here: The success the team had with Peterson skipping in 2019-20 carried through to 2020-21. They qualified the United States for the Olympics by winning bronze at the worlds. They then punched their own ticket to Beijing by winning the Olympic trials, beating Cory Christensen in the best-of-three final, 2-0.

Outlook: Contender for playoffs but probably a darkhorse for gold. Any question about if the 2019-20 season was a flash in the pan was put to rest with the bronze at Worlds. They have posted good results against some of the best fields in curling and should be in contention for one of the four playoff spots and have nice betting odds. The USA is on a heater right now and that might translate into a medal in the women’s Olympic curling odds and will be a betting favorite.