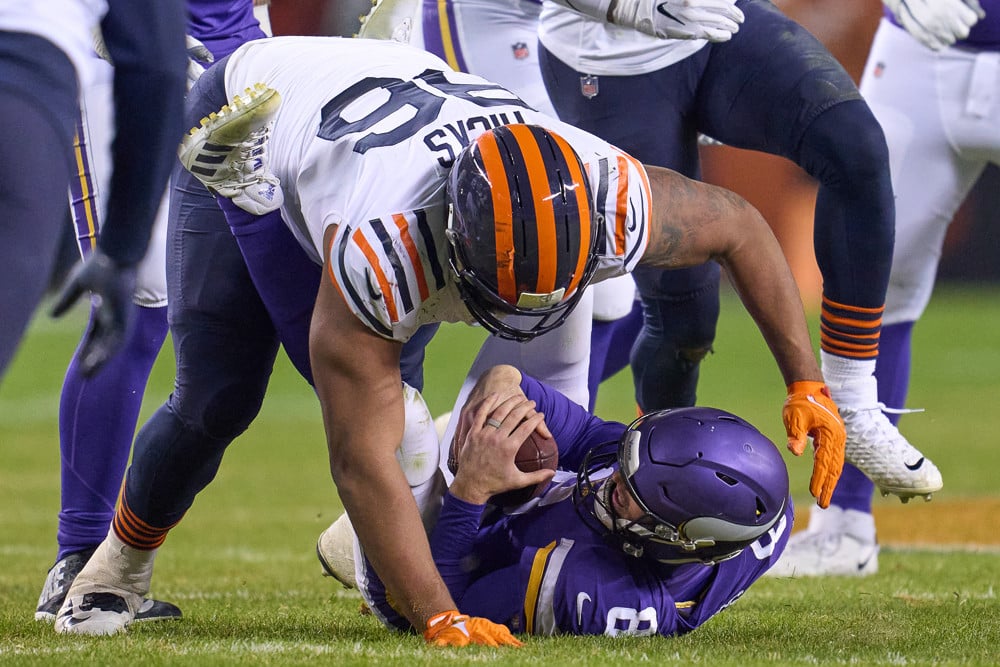 They are the run-stopping, quarterback pressuring, line pushing gentleman.  They crash their heads into offensive linemen on every play.  These guys push their way towards the quarterback while also stopping the running backs that come their way.  They don’t always run up a bunch of stats, but they still make a big impact.  They are the defensive lineman.  In 2022 there are several free agent defensive linemen that have been around for some time.

A saturated market of formerly feared names are now entering the end of their careers.  Still, there should be some movement and here we will look at some of the top names.  Take a look to see which defensive lineman your team might have an interest in. Go here if you’re looking for some good odds from NFL betting sites.

Our first 2022 free agent defensive lineman is also the oldest on the list.  Drafted in 2008, Calais Campbell has thirteen years of experience to bring to any defense.  He doesn’t just bring experience, however.  Campbell had 10 run stuffs in 2021.  At 6-8, he’s able to use his strength and size to still plug holes and stop the run.  Even though he’s contemplating retirement, Campbell is a valuable player who should have interested teams.

Chicago looks like they will part ways with Akiem Hicks, an anchor of their defensive line for the past six years.  Hicks has missed a significant amount of playing time in two of the last three years, making it harder for teams to find him reliable.  Still, when healthy Hicks is a big guy who excels at stopping the run.  Watching the Bears’ defense, they were an entirely different team when Hicks was on the field versus when he wasn’t.  I expect this free agent defensive lineman to land on a team where he will be allowed to play as a situational role player.  He has a high motor and a funny personality, bringing experience and humor to any locker room.  As a Bears fan, I will miss watching him play in blue and orange.

Playing the last two years for the Chargers, it would appear as if Linval Joseph will be hitting the free agency again.  A solid defensive lineman, Joseph finished 2021 with 57 total tackles, playing 47.4% of the defensive snaps.  Joseph is a strong defensive tackle, starting back when he was a high school weightlifting champion.  Given his age, it is likely he’ll only find a one-year deal.  Regardless, he should have several suitors looking to add some strength to their defensive line.

Our first spotlighted free agent defensive lineman that is under 30, Jarran Reed spent most of his playing years in Seattle.  Playing on a 1-year deal in Kansas City this year, Reed finished with 43 tackles, 2.5 sacks, and 4.5 run stuffs.  Playing 63.7% of the snaps, Reed is conditioned well to play a good number of snaps.  He’s a solid contributor with good experience.  He should be able to land a contract for at least two years.

No stranger to switching teams, Sheldon Richardson looks to be on the move again in 2022.  As a free agent defensive lineman, Richardson could land on the 5th team of his career.  Drafted in 2013 by the Jets, Richardson had one-year stints in Seattle and Minnesota.  He then spent two years in Cleveland before coming back to Minnesota.  Playing for the Jets, Richardson had two years with double-digit run stuffs.  However, in 2021 his play was subpar with only 39 tackles, 2.5 sacks, and 6 stuffs.  It was the second-lowest tackle total of his career and 3rd lowest in sacks.  Richardson will look to bounce back in 2022 on what I expect to be a one-year deal.

Drafted in the first round of the 2017 draft with the third pick, Solomon Thomas never quite lived up to the high expectations.  He spent his first four years in San Francisco, tearing his ACL in the fourth.  Thomas was picked up on a one-year deal in the free agency last year by the Raiders and had a career-high in sacks.  Still, he hasn’t quite been the same force he was at Stanford.  At only 26 years old he’ll get an opportunity to finally live up to 3rd overall draft pick on the 3rd team of his professional career.

The second Raiders’ free agent defensive lineman, Quinton Jefferson, hits the free agency after the highest sack count of his career.  Drafted in 2016 by Seattle, Jefferson has spent two one-year stints with the Bills and then the Raiders.  This season he had career highs in tackles, sacks, and stuffs.  A return to the Bills would be interesting, however, Jefferson should have plenty of offers on the table.  It also wouldn’t surprise me to see the Raiders bring him back given they’re currently slated to lose two defensive linemen.

Playing his entire career for the Rams, Sebastian Joseph-Day will test the free agency for the first time.  A productive player in three years, Joseph-Day only played 7 games in 2021 due to an injury.  Still, he had a career-high in sacks, proving he is growing as a player.  His 5.4 tackles per game would have also led to a career-high in tackles had he not been injured.  He will be fully recovered from his pectoral injury and at only 26 years old he should have several offers.  He has learned from guys like Aaron Donald, Michael Brockers, and Ndamukong Suh, giving him the experience and knowledge that he needs to make a name for himself.

Entering his 11th season, Malik Jackson is another name to watch among the 2022 free agent defensive lineman to watch. Jackson has played for four different teams including the Broncos, Jaguars, Eagles, and Browns.  Even at the age of 32, Jackson played over 50% of the snaps.  Jackson played his best football from 2016 to 2018 when he was on the Jaguars.  During his three years, he totaled 104 tackles, 18 sacks, 4 forced fumbles, and 14 stuffs.  In 2021 he had his lowest output since his rookie season in 25 tackles and only half a sack.  Maybe a return to the Jaguars would be a good fit for both Jackson and the Jaguars.

Joe Burrow got DRILLED by Malik Jackson. Roughing the passer was called. Burrow went out for a play but is now coming back in.pic.twitter.com/ZUo4AvRaLR

Playing the best season of his six-year career, Austin Johnson should be a sought-after 2022 free agent defensive lineman. 72 tackles, 3.5 sacks, and 5.5 stuffs all doubled his previous highs in each category.  Drafted by Tennessee in 2016 out of Penn State, Johnson returned to the form he held his last season at Penn State, where he had 6.5 sacks.  Hitting the free agency in 2020, the New York Giants took a two-year chance on him.  Look for Johnson to get a multiple-year deal again in the 2022 free agency.

There are plenty of other veterans who played well enough they should pick up one-year contracts.  Some of these guys were headline makers in their younger days.  They include Dante Fowler Jr., Mario Addison, Ndamukong Suh, B.J. Hill, and William Gholston.  Also, look for Folorunso Fatukasi to garner some attention.  He only has 3 sacks in three years but this last year he had twelve run stuffs and that may be good enough to get him attention in the free agency.