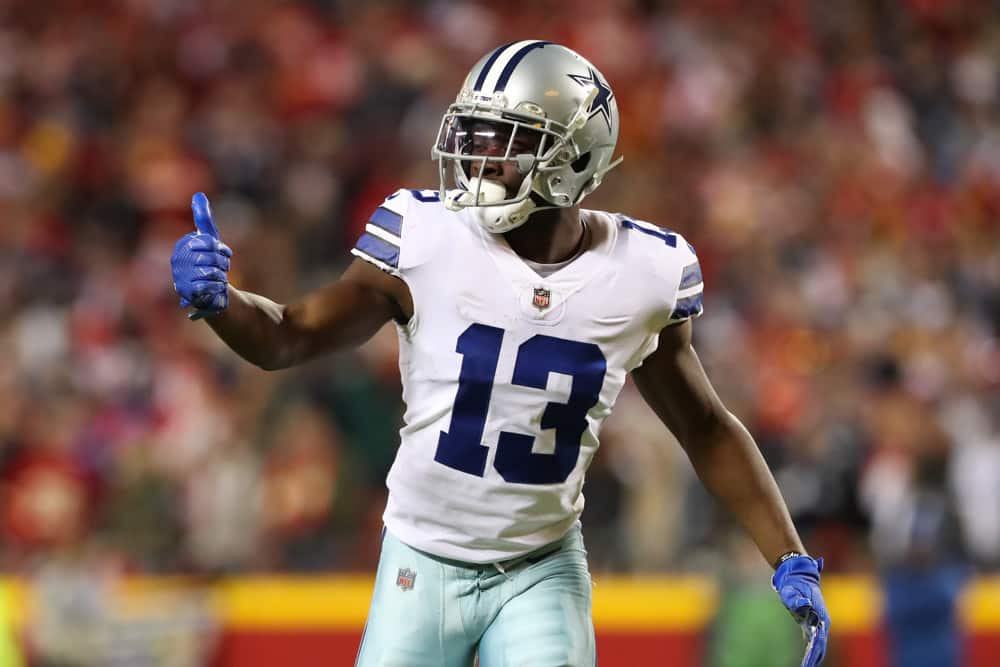 It’s a special Week 12 NFL Thanksgiving Day edition of the DraftKings DFS picks column. This year, we are back to a full three-game helping of NFL action. Back on the menu are the traditional Lions and Cowboys contests. As a bonus, we get to watch the Buffalo Bills attempt to bounce back from their Week 11 loss.

It’s been well documented that all six of these teams taking the field this Thursday suffered a loss in their last outing. Not to mention, injuries play a large part in at least two out of the three games. This could mean we are in for more than a few lackluster performances. At the same time, it could elevate some unlikely heroes. Navigating this slate has become more difficult than avoiding that awkward relative you only see on holidays, but always wants to tell you an entire year’s worth of stories. While I can’t help you with that, I can help you set your DraftKings lineups.

It says a lot that D’Andre Swift is the most fantasy-viable option for the Detroit Lions this season. It says a lot because the team added Jared Goff hoping he could spin straw into gold. Unfortunately, the only thing he’s been able to spin comes nowhere near gold. The only silver lining the Motor City can enjoy is the play of their second-year running back. In a disaster of a season happening around him, Swift is more than halfway to a 1,000-yard season. He’s also second on the team in overall targets, receptions, and receiving yards. Despite his lack of support, you can fire him up and get an acceptable return.

What makes the pot even sweeter for Swift is this week’s matchup. He will get to run against a Chicago Bears defense that has just allowed double-digit fantasy points to the running back position in their last two games. On top of that, they find themselves without the services of Khalil Mack. This leaves Chicago wide open for a full-on attack from one of the league’s best rushers. This will not be a high-scoring game either. Both of these teams rank towards the bottom of the league in points per game. This puts fantasy points from this matchup at a premium. That said, Swift is all but a lock to be one of the only players you can trust here in your Thanksgiving DFS lineup.

On the other side of the ball, David Montgomery is also a bright spot on a struggling offense. Though an injury took him off the shelf for a couple of weeks, he’s still been a solid fantasy option when he plays. So far this season he hasn’t factored into the passing game as much as everyone would have liked. Although, that can be attributed to his rookie quarterback’s run-first mentality when pressured. He’s had a couple of weeks now to catch back up to game speed. Last week, he carried the ball 14 times for 58 yards against Baltimore who represent one of the top run defenses. This week, he gets to face one of the worst.

Straight to the point, the Lions are terrible against opposing running backs. They are second to last in the league in terms of rushing yards allowed per game. They are also at the bottom when it comes to rushing touchdowns allowed. All of this gives Montgomery a clear path to a monster Week 12 NFL Thanksgiving Day outing. He should also benefit even more with Andy Dalton under center on Thursday. Having a veteran presence at the helm should calm the offense down. Also, with Dalton not known for his ability to take off and run, this should put the ball in Montgomery’s hands a few more times. This is an inexpensive play for what should be a huge return. It’s certainly worth throwing into a few Thanksgiving Day DFS lineups.

It was looking as if Michael Gallup was going to be the wide receiver one heading into Thursday’s game. The Cowboys had Amari Cooper already ruled out and CeeDee Lamb on concussion protocol. Gallup would have assumed the role if Lamb were to have to miss the game. News is out now that Lamb will return to practice and likely play on Thanksgiving.

This does not diminish Gallup’s value though. He will still be the number two option for Dallas. In his first two weeks back from injury, he’s seen 15 targets. Ten of those came last week. You know Dak Prescott is looking at him. Should he get the same attention this week, and catch a few more passes, he’ll pay off your investment.

If you are looking to go full Buffalo stack for this Week 12 NFL Thanksgiving Day slate, Hunter Renfrow is the salary relief you will need to get there. In two out of his last three games, he’s seen nine targets. In both of those games, he managed to catch seven of them. Last week was the only week of the three where he failed to reach that mark. Even still, he caught all four of his targets. Sadly, he totaled only 30 yards in the process. He has ascended to number one status in this young Raiders receiving corps. Even with DeSean Jackson in the mix, Renfrow will continue to be the main wideout on the team.

He’ll get a crack at a Cowboys pass defense that is soft against the passing attack. They did manage to keep both the Chiefs and the Falcons wideouts out of the end zone the last two weeks. Of course, they surrendered a receiving touchdown in each of the three games leading up to that. Renfrow will likely not be a slate buster. That said, he can and will be a serviceable value flex option in your Thanksgiving DFS lineup.

One of the more obvious strategies for this slate is to run a Bill lineup. Tossing Josh Allen and Stefon Diggs on a single roster is expensive though and will leave you searching for value options. A way to accomplish this task while keeping heavy Bills exposure is to add Cole Beasley to the mix. True he’s been quiet as of the last couple of games. But, before that, he had turned in three straight double-digit fantasy performances. In fact, he’s had three games of over 20 fantasy points this season.

It is absolutely scary to think of what Allen will be able to accomplish against a Saints defense that is allowing over 250 passing yards per game. In addition, you have to assume he and Buffalo will be on the warpath after an embarrassing loss last week to the Colts. Any and all pieces of this offense will make a lot of people thankful this Thursday. At his price, Beasley is by far the most valuable of them all considering the lineup combinations he makes possible.

The Saints are about to find out what life is like without their top two running backs. Both Alvin Kamara and Mark Ingram were non-participants in practice this week. Neither looks like they will suit up for this Week 12 NFL Thanksgiving Day slate. This leaves Tony Jones Jr. and Dwayne Washington as the active backs for New Orleans. Both are likely to get some touches in the game. This is especially true given they are both running backs on a team that hand the ball off as much as the Saints. It will be tough sledding for Jones as Buffalo comes in with a solid rushing defense. That said, you need cheap options for this slate, and rostering the possible lead back on a run-heavy team is not a bad plan.