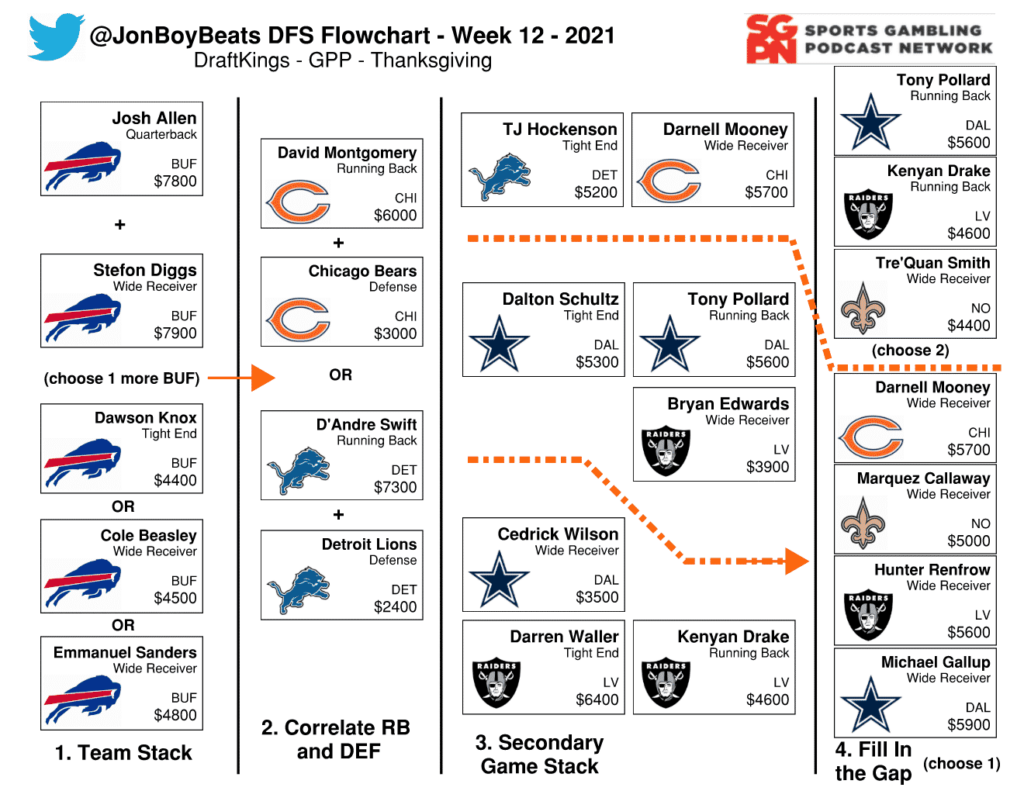 Week 11 was a big one for The Flowchart. Having pieces of the Packers/Vikings game was pretty much the most direct way to win money last week and we were all over that! If only that Christian McCaffrey square would have been turned into a Jonathan Taylor one, what could have been. Enough celebrating, we’ve got way too much to discuss today in regards to tomorrow’s 3 game Thanksgiving NFL slate. Let’s get to it and get to you winning money on DraftKings Thanksgiving slate of contests using the flowchart.

Changing Your Approach for Smaller Slates

Thanksgiving football has got to be one of the most beautiful things about being an American. We get to stuff our faces all day long with amazing food, and then sit back on the couch surrounded by your Uncles, Aunts, Grandparents, and Cousins and watch the pigskin get tossed around. There are a few small nuances that are important to discuss when it comes to these small slates. Here is a list of four rules, that I have no problem breaking when there are only six teams to choose from:

Being Conscious of Late Swap

I usually don’t spend a lot of time talking about late swap here in the weekly columns. It’s a little bit too nuanced to try and describe in the context of each week’s flowchart, however on a slate like we have on Thanksgiving, it becomes a lot more clear. When thinking about the late swap, you want to try and use an approach that allows each game’s outcome to further inform your lineup construction. This may be really overwhelming if you are firing off 20+ DraftKings lineups, but if you are only doing a couple it is a much more manageable flowchart on Thanksgiving.

Here’s an example of what I’m talking about. As you see, I have made it a point to include Stefon Diggs in every lineup of The Flowchart this week. There’s a couple of reasons for this, but the main one is that I expect him to be the most popular wide receiver played on Thursday. You may be thinking “That doesn’t make a lot of sense, I thought we wanted to be contrarian in GPPs?”. By including the most popular (and most expensive) wide receiver in our Flex position tomorrow, it allows for us to be super flexible (no pun intended) while we watch the games play out. Note: you won’t be able to play Diggs in flex in double TE lineups of course.

If we get through the first two games with a lineup that is full of red flames by players’ names, it probably makes a lot of sense to keep Diggs in to help make sure that you block everybody who has him behind you. On the flip side, if we have a couple of snowflakes in our lineup by the time kickoff for the 2nd or 3rd game starts up, it’s going to make a lot of sense to get off of Diggs. We are essentially making a bet that Diggs will play poorly, and if he does our snowflake lineups will jump all of the others who have him ahead of us. If Diggs does well, your lineup probably wasn’t going to cash anyways, so it’s a low-risk swap at that point.

Here is how I expect ownership to land at the RB/WR position in the last game of the day: Diggs -> Ingram -> Beasley -> Large Gap -> Sanders -> Smith -> Harris -> Callaway -> Bills RBs. Based on how your lineups look after the first two games, will help determine how low you want to climb on that ladder.

The other thing I will mention is late news on Thanksgiving is going to be very important! Right now both Alvin Kamara and CeeDee Lamb don’t look like they are going to play. This leaves Diggs and Ezekiel Elliott as the only real spend-up players on the slate. If news breaks tomorrow morning about Kamara or Lamb being active, you will want to shift some exposure to these guys and get off of some of the more popular players. There’s no better day to take advantage of late news than on the day when most of our competition will be scrambling around the house trying to get the turkey and mashed potatoes ready for the big meal. Of course, everything I talked about above entails a lot of phone watching and Twitter scrolling.

Thanksgiving is supposed to be for family, so don’t feel pressured to try and overthink your DraftKings lineups instead of catching up with your crazy Uncle that you only see twice a year. If you are going to be pretty preoccupied I would just recommend scaling back some of your gameplay tomorrow and just enjoy the day!

I chose to go heavy on the Buffalo Bills here. Yes, it will be extremely popular, and yes it will put more pressure on other parts of our lineup to be closer to perfect. However, I really don’t know if I could live with myself by playing Jared Goff or Andy Dalton in the first game of the day and then immediately turning off my phone after the 9-6 shootout ends. Give me all the Josh Allen and Stefon Diggs so I can at least have a chance at glory when I’m watching the late game on TV. There are a couple of ways to be different even when playing the Bills.

We can load up on three pass-catchers instead of two which is how it’s currently shown. We can also not bring back a New Orleans Saints player at all. Right now I have included a few lineup combos that have a Saint, but if you want to get weird just completely leave them out. I’m not going to force it. The other thing we can do is load up the Bills’ defense with the Bills’ position players and root for a bloodbath. Some of these approaches won’t necessarily work with how The DraftKings Flowchart is laid out this Thanksgiving week, but if you’ve gotten this far I am confident you’ll be able to figure out how to make it all fit.

Correlate a Popular RB with their Defense

I already talked about how I think this Lions and Bears game has the potential to be a slogfest. If that plays out, then I want to try and lean into it with a little bit of correlation. David Montgomery should be the most popular RB tomorrow, so make sure you are aware of that when putting together your lineup. D’Andre Swift is seeing an incredible amount of opportunity lately, so he’s definitely someone I want a lot of exposure to.

You can see by now that the two biggest stands I am making tomorrow is fading both Ezekiel Elliott and Josh Jacobs. To be honest with you, I am a bit terrified of the full Zeke fade as he won’t be super popular and is an easy swap off of Diggs. I would imagine that by the time the Cowboys game kicks off, I will have swapped a few lineups over to get some Zeke exposure, but only if Monty and Swift both fail miserably. I don’t believe a lot of people will be playing three RB lineups, so I will do that if I get some early snowflakes.

Work in a Secondary Stack

This is where things start to get pretty fun. If we go with the TJ Hockenson and Darnell Mooney route at the top of The Flowchart, we are giving a lot of salary to the Bears/Lions game without having to roster either of their Quarterbacks. Since both of these teams have a really small group of good position players, I think we can get access to the Bears through only Mooney or Montgomery. In the same way, I think we can get access to the Lions through only Hockenson and Swift. I don’t see a lot of pathways to rostering either of these combos and then kicking ourselves for not including their QBs, there just isn’t a lot of extra upside there for your DraftKings slate and the Thanksgiving flowchart.

The next two options allow for us to load up on the Cowboys/Raiders game which has the highest total of the slate. I don’t have the same conviction that we won’t need these Quarterbacks if their teams blow up tomorrow. Due to that, I may once again end up swapping to some Derek Carr and Dak Prescott exposure based on outcomes in the morning game. I would be more likely to swap to Prescott in lineups that have both Dalton Schultz (Column 3) and Michael Gallup (Column 4). Similarly, I will be more likely to swap to Carr in lineups that have Darren Waller (Column 3) and Hunter Renfrow (Column 4). If both of those pass-catchers on each team hit their ceiling, the Quarterback is probably getting there with them.

Fill In the Gaps

There is some double up here with players from Column 3, but I wanted to make it very clear on who I want to try and get exposure to when filling in the gaps. If you chose the Hockenson and Mooney route, then make sure to pick two players from the top of Column 4. If you went with one of the Cowboys/Raiders stacks, then just cycle through some of the $5k receiver options in Column 4 for your lineups.

I know there is a lot to digest here, and it may make your Thanksgiving day feel a bit overwhelming if you are tracking everything. Just remember two things. First, enjoy this day with your family and have fun watching football. Second, this is one of the best days to gain an edge against the rest of the casual players. Choose your lineups accordingly!

Good luck tomorrow! I hope to see your names across the top of some leaderboards using the Thanksgiving DraftKings flowchart.