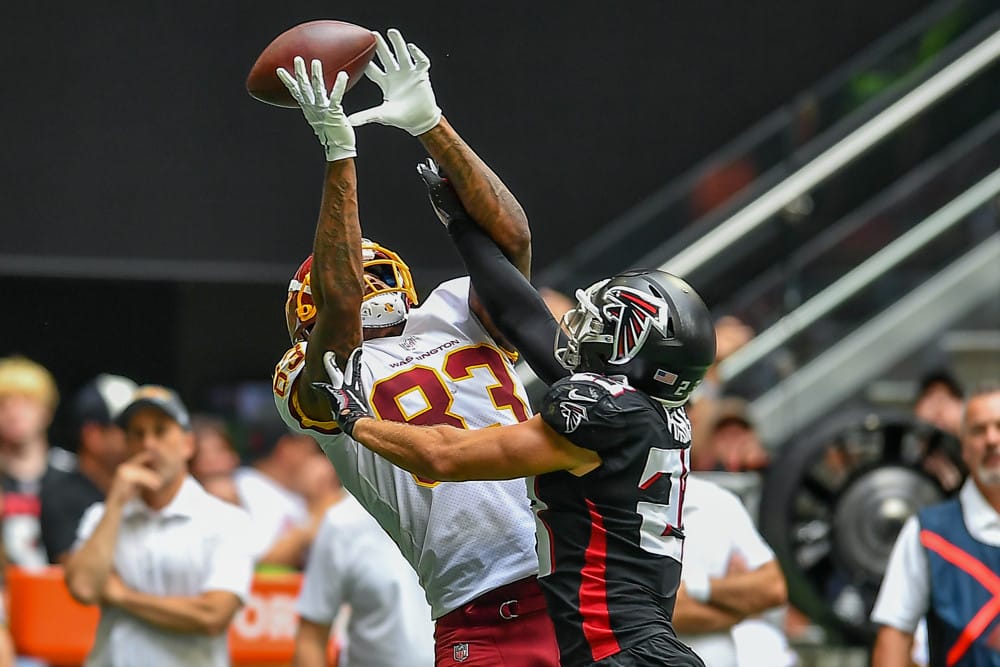 Take a deep breath, the major bye week is behind you and it’s time to look ahead with our SGPN Week 8 Fantasy Rankings update. The only two teams on bye this week are the Baltimore Ravens and the Las Vegas Raiders. It’s going to be a lot more fun setting your lineups with the majority of your players available to you again. Of course, that makes some of your start/sit decisions a little tougher. That’s where these rankings come into play. Our staff is here to help you decide who to plug in your winning Week 8 lineups. Here are a few players worth spotlighting due to some variance within our rankers.

Maybe not so quietly, Carson Wentz has put together a respectable fantasy football season. He’s turned in six performances of more than 17 fantasy points so far this year. That includes a 20 point outing last week in less than ideal conditions against San Francisco. Wentz threw two touchdowns in the wind and the rain in Santa Clara in the Colts win. It was his fifth game of the season in which he tossed for exactly two scores. He also ran in his first touchdown as a member of his new team. All in all, whether you picked him up from the waiver wire, or you had the foresight to draft him, you have been relatively happy with your decision.

Despite his small level of success, a majority of our rankers don’t consider him a must start this week. The only one of us who trusts him against the Tennessee Titan this week is Ryan Kramer. It’s possible that Kramer is considering that the Titans are giving up just under 300 yards per game to opposing quarterbacks per game. Tennessee has also given up multiple touchdown passes in four of their seven games. Wentz will not be fighting the elements this week at home and has momentum on his side. There is a good chance Kramer could end up closer than the rest of the staff by the end of the day on Wentz.

The book on Kenneth Gainwell is not exactly what he or the Eagles had hoped for at the start of the season. Even with Miles Sanders as the clear starter, Gainwell was supposed to be an effective change of pace. So far that has not fully panned out with many more bust weeks than boom weeks. He’s yet to see double carries in a single game. What’s more, he has only registered double digit touches in one game this year. He was being drafted at the beginning of the year as a late round flyer. So far, he’s been a flex headache from week to week. You likely played him the week he posted a single digit total. Then, you probably sat him the next week when he went for double digits.

Of course, this week, the “free Gainwell,” movement will gain some traction. Miles Sanders is set to miss the Eagles matchup against the Lions. This gives the rookie a chance to see a sizable workload uptick. This is why the vast majority of our Week 8 Fantasy Rankings have Gainwell safely inside the RB2 conversation. Only Nick Dant and Scott Reichel disagree with this assessment. Dant has Gainwell at #29 while Reichel places him at #27. This puts him in the flex conversation, but takes him out of RB2 consideration. Philadelphia does draw an intriguing matchup this week though. Detroit finds themselves in the bottom third of the league in rushing defense. They have three 100-yard games to opposing running backs this season. The potential is there for Gainwell to have a true breakout game this week. It may be hard to keep off the field once Sanders gets back.

The emergence of Ja’Marr Chase and even C.J. Uzomah recently has caused stock in Tee Higgins to drop considerably. There is no doubt he has slipped down the receiving ladder in Cincinnati. Despite that, Higgins has still registered double digit fantasy points in all but one of the games he’s played this season. Last week, he still managed to catch 7 passes on 15 targets for 62 yards. What made that even more impressive was that it came on a week where Chase went off for over 200 yards on 10 targets. He’s pretty much been locked in as a week to week low end WR2 or borderline WR3 all season. This is obviously due to newer and flashier targets capping his potential.

Joe Mixon takes it in for six ➡ Tee Higgins TIES IT UP!

It should be of little surprise that our staff has lost faith in Higgins’ ability to remain in the WR2 conversation this week. Five out of the six staff members have him ranked between #25 and #27. Only Adam Pelletier sees the Bengals wideout as a true no-question fantasy starter. He has put Higgins in the #16 spot making him a WR1 in a deep league. This is actually entirely possible really as Cincinnati takes on a less than stellar Jets pass defense. In back to back weeks, multiple wideouts have had fantasy relevant days against them. Last week, rookie Mac Jones touched them up for almost 400 yards. As a result, both Kendrick Bourne and Nelson Agholor turned in double digit fantasy performances. Joe Burrow has the ability to do the same, and should make Higgins a solid option again this week.

We live In a world where Travis Kelce has become a liability. It’s also a world in which Mike Gesicki, Dallas Goedert, and Dalton Shultz have entered the Top-5 tight end conversation. What’s more, we are not talking about Ricky Seals-Jones as a fantasy starter in our Week 8 Fantasy Rankings. Seals-Jones has caught at least four passes in each of his last three games. He’s been targeted at least six times over that span as well. It’s clear Taylor Heinicke is building something special with his tight end. As such, his stock as a fantasy relevant tight end will continue to climb. Again, with the landscape of the position turned upside down, Seals-Jones finds himself in a favorable situation to benefit.

Ricky Seals-Jones got wide open for this TD 😳

As you’ll notice by our rankings, our staff sees things the same way. Sitting at a consensus TE12, Seals-Jones is a starter in leagues of 12 teams or more. Only Dant seems to still think you have 12 better options heading into the Football Team’s game against the Broncos. He may be onto something. No tight end has scored a touchdown against the Denver defense this season. What’s more, only Mark Andrews has gone over 60 yards receiving in a game. The closest to accomplishing that was Darren Waller back in Week 6. Chances are, if you have him, you’re starting him in most cases. That said, understand that you could be in for a disappointing day.