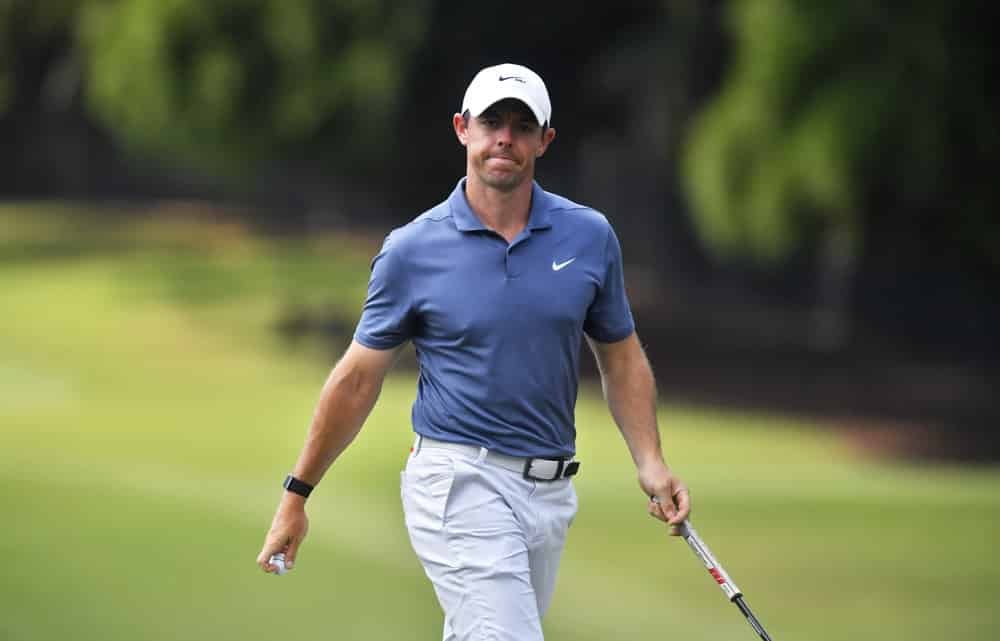 The second leg of the mini-Las Vegas swing tees off this week. An incredibly strong field takes on yet another Tom Fazio design for a one-off event. It’s the CJ Cup @ Summit from the Summit Club in Las Vegas. As always, here is your early deep-dive on The CJ Cup @ Summit and a preview of how to bet.

As mentioned in the introductory paragraph, the field this week is WGC-caliber. It’s so strong even the list of players in the alternates field is good. Players who hope someone WD’s before the tournament include Matthew Wolff, Matthew Fitzpatrick, Bubba Watson, and Ryan Palmer. That shows just how good the field is at the CJ Cup @ Summit.

The player I’m most interested in seeing this week is Rory McIlroy. Rory looked utterly gassed at the Ryder Cup. He was the biggest disappointment for Team Europe, and he knew it. After a meaningless 3&2 victory over Xander Schauffele, Rory gave a tearful interview showing how disappointed he was at his play. He also looked really tired and drained in the interview. I thought that would be the last time we saw Rory until next year.

But here he is in the field this week at a golf course designed by one of his favorites. Rory’s record on Tom Fazio tracks is awesome, most notably with his success at the Fazio redesigned Quail Hollow. Can a return to a friendly design rekindle his fire? Time will tell.

Other notables in the field include Dustin Johnson, Brooks Koepka, Collin Morikawa, Xander Schauffele, Jordan Spieth, and Justin Thomas. But this is just the tip of the iceberg of the wealth of talent in this field. For the full field, click here.

For the second year in a row, the CJ Cup will take place in the United States. Due to COVID restrictions in Korea, the tournament is unable to play at Nine Bridges on Jeju Island. Filling in at the last minute is The Summit Club in Las Vegas, designed by Tom Fazio. It’s now the third time over the last year a Tom Fazio design has been the substitute for a canceled International PGA Tour event. It also will be the eighth Tom Fazio design to host a major professional tournament since last September.

The Summit Club is an ultra-exclusive private club located in southwest Las Vegas. The club is essentially the last point before Sin City transitions to the desert. It first opened in the fall of 2017 and commands an initiation fee of $200,000. Members also can purchase homes around the golf course for an affordable starting price of $3,000,000. Of the over 100 homes around the golf course, only about half are members to play golf. The majority of homeowners around The Summit are members for the social perks only.

As far as the golf course itself, Tom Fazio was brought in to design the golf course. Tom Fazio is responsible for several high-profile exclusive Las Vegas golf courses. He built Shadow Creek as well as designed the Wynn Golf Club (home of Brooks vs. Bryson after Thanksgiving this year). Both golf courses spared no expense in their construction and cost a fortune to maintain.

The Summit Club is no exception. Its goal is to deliver a luxurious golf experience for its players:

At first blush, this golf course screams Tom Fazio. It’s a big ballpark. It has perfectly manicured fairways and greens. There’s lush bentgrass tee to green.  There are huge puzzle-piece bunkers with bright white sand off the fairway that pinch into the landing zone. Big, undulating, sweeping greens are guarded by similar huge puzzle-piece bunkers. And the golf course looks almost completely unnatural to the landscape around it. If walls were put up on the perimeter of each hole, you’d have no idea you were playing in a desert.

The allure of the golf course is definitely the eye candy views. 13 of 18 holes play either directly east or west to provide premium visuals. Players are treated to spectacular views of the mountains as they play uphill to the west. Holes that play downhill towards the east have great views of the Las Vegas strip. All on a surface that spares no expense in quality.

The Golf Gambling community sometimes freaks out when the PGA Tour heads to a new golf course. Without access to course history, gamblers can suffer from handicapping paralysis. But fear not. When I look at this golf course, it feels like the exact same big ballpark Tom Fazio design we’ve seen a few times this year.

So what works at Tom Fazio designs? Their reputation is that they’re very demanding tee to green. That usually makes it easy to just target players who excel in the Strokes Gained-Ball Striking statistics. And players who tend to gain strokes on the field off the tee have a big edge over those who can’t. We’ve seen that played out at places like Quail Hollow, Caves Valley, and Kasumigaseki over and over and over.

There aren’t too many Par 4’s and 5’s where water comes into play off the tee. Only a manmade creek that winds its way downhill along with the 9th, 12th, and 13th fairways. But on all holes, the surrounding desert waste areas act as their own natural hazards. But they’re so far off the holes that they won’t come into play unless someone misses extremely. If a player finds themselves in the desert this week, they have a lot bigger problems in their game that they need to fix.

Other than looking at stats, there are several golf course comps gamblers can look at to try to find golf course studs. For starters, this is the definitive list of true Fazio designs played on the PGA Tour:

Sometimes fake Fazio designs are floated out there by the golf gambling community. PGA National is one popularly attributed to Tom Fazio. While Fazio and his brother did the original design, Jack Nicklaus ripped up the Champion Course in 2002. It’s now a Nicklaus, not a Fazio. In addition, Firestone Country Club is falsely attributed to Fazio. Fazio designed the West Course at Firestone. The WGC-Bridgestone, however, took place on the South Course. That’s a Robert Trent Jones and has remained relatively unaltered apart from some tinkering. Don’t use these golf courses to identify Horses for Courses.

Another avenue gamblers could use this week are performance on tough, demanding golf courses. Here is a list of so-called “Big Boy Golf Courses” on the PGA Tour:

These golf courses typically are pretty demanding tee to green. They’re also relatively big ballparks. And they’re not golf courses where one can fake it around with great putting and scrambling. These golf courses provide a preview of what to expect at this week’s CJ Cup @ Summit.

Lastly, here is a list of players in the field this week who have gained over 1.5 strokes per round on the field at all of the mentioned venues (minimum of 10 rounds):

There are absolutely no fakers on this list. In addition, all of them at their peak display absolutely dominating ball-striking numbers. The cream generally rises to the top at all of these golf courses. Expect more of the same this week at the CJ Cup @ Summit.