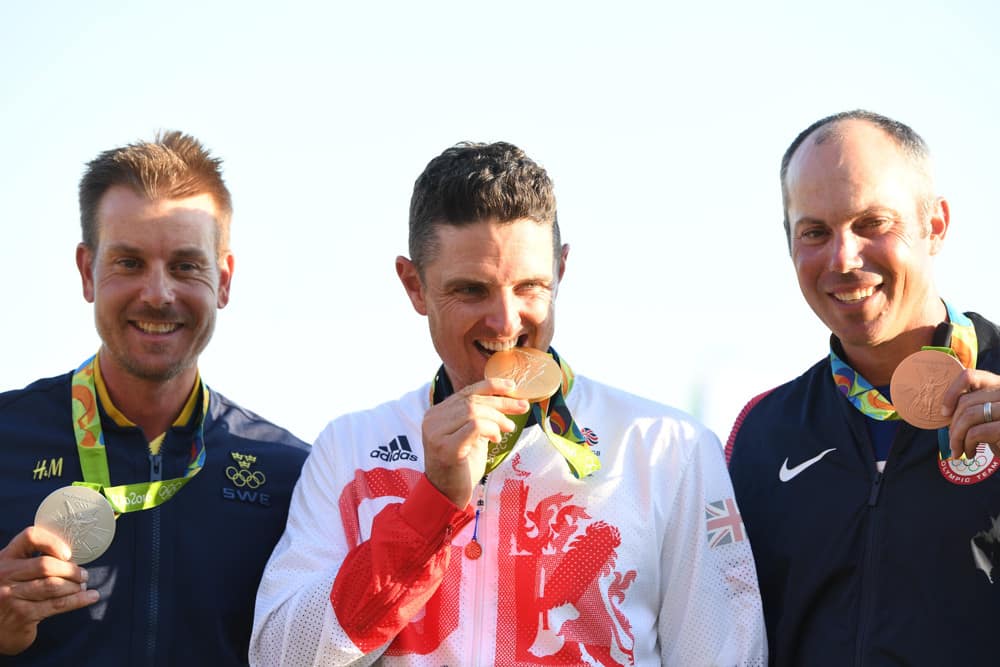 After a year of waiting, golf returns to the Olympics in Tokyo, Japan. A solid field vies for the gold medal on the East Course at the Kasumigaseki Country Club. As always, here is your early deep-dive on the Men’s Olympic Golf competition and a preview for how to bet.

A few high-profile names have withdrawn at the 11th hour due to COVID. Both Jon Rahm and Bryson DeChambeau popped for COVID and will not compete in the Olympics. Patrick Reed took the place of Bryson DeChambeau for Team USA. It is unknown who will take Jon Rahm’s place.

Despite their withdrawals, this is still a very strong field of players who will compete for the gold. It’s much stronger overall than in 2016. Both the Zika virus and security issues in Brazil kept many top names away from the 2016 Rio Olympics. Highlighting the field is a strong American team of Justin Thomas, Xander Schauffele, Collin Morikawa, and Patrick Reed. All are a significant threat to take home the gold.

Another interesting team is Team South Korea, led by Sungjae Im and Si Woo Kim. Both players are staring at losing two years of their professional golf career with mandatory military service. A medal of any form will give them a get-out-of-jail-free card and allow them to continue their careers. Both will be under immense pressure to play well this week.

The Kasumigaseki Country Club opened in 1929. C.H. Alison is responsible for the original design. Alison was a protégé of architects like Allister MacKenzie and Harry Colt. In 2016, Tom Fazio came in to renovate the East Course for Olympic play. As a result of his work, the 7,447 yard East Course will present a stiff test for the Olympic field:

Tom Fazio made dramatic changes to the East Course. He added new tee boxes to lengthen the golf course. Fazio added more bunkers to the driving zones to modernize the golf course. Fazio also moved a lot of earth to create more natural-looking elevation changes and raised greens. Many greenside bunkers were renovated to sit well below the putting surface. Much like other Fazio designs like Quail Hollow and Shadow Creek, the East Course at Kasumigaseki Country Club is quite demanding.

But the biggest change made to Kasumigaseki Country Club was the elimination of the double green system. This is a classic staple of Japanese golf architecture. Golf is not just a popular sport for recreation purposes, but it’s important to the business culture. Golf courses serve as a way for high stressed workers to blow off steam. It’s also a great route to close deals with clients. Golf is vital to the mental health and economy of Japan.

The demand is there for golf to be available all year round. To accommodate for this, many Japanese golf courses had two greens on each hole. One green is planted with a northern strain of grass for cooler months. The other is planted with a warm strain for the summer months. Two greens of different grass types ensured the golf course would be in premier playing condition at any time of the year.

Kasumigaseki Country Club is in immaculate condition. The greenskeepers devote significant time and resources to ensure perfect playing surfaces. Here’s a video from the History Channel showing the incredible efforts taken by the club to create perfect playing conditions:

The greens on the East Course are bentgrass and cut to 0.1 mm. In addition, the fairways and rough are zoysias.

The last notable tournament played on the East Course at Kasumigaseki Country Club was the 2010 Asian-Pacific Amateur, won by Hideki Matsuyama. But this was before Tom Fazio renovated and lengthened the golf course. As such, there is no relevant course history to draw on. Bettors will have to look elsewhere to find proper leans.

The first place to start is with Tom Fazio. There are a few Fazio designs on the PGA Tour. These include Quail Hollow, Shadow Creek Country Club, and Conway Farms. All three golf courses are very demanding tee-to-green. Performance off the tee is critical at these places because of where fairway bunkers are located. Mid to long irons are also put to the test. Fazio’s renovation to the East Course has transformed it into a similar golf course as these three venues. Players who perform well on these types of tracks are one to look at.

There are also clues about the golf course itself. As mentioned earlier, the greens are cut to one-tenth of a millimeter. Bentgrass greens cut this short-run very quick, especially with how contoured Fazio transformed the greens too. However, Tokyo will get some rain before the tournament. While the greens might run quickly, they should be soft and receptive. The rain also will widen the fairways a bit, as well as make the golf course play longer.

The last clue bettors can look for with the golf course is the grass type. As mentioned before, target players who putt well on bentgrass greens. There also are a few golf courses of recent memory that featured zoysia fairways and rough. Zoysia is a spongey grass native to tropical climates such as Asia, Australia, and Africa. The ball sits up very nicely on the fairway, almost like it was on a tee. Fantastic iron players can take advantage of zoysia for great contact and spin control into the green. Notable golf courses that featured zoysia fairways and rough include Trinity Forest, TPC Craig Ranch, Bellerive Country Club, and Naranshino Country Club (site of the 2019 ZOZO Championship). Of these, TPC Craig Ranch, Bellerive, and Naranshino also utilized bentgrass greens.

Lastly, it’ll be hard-pressed for me to bet someone more than 40/1 to win the gold. On a tough and demanding golf course, the cream rises to the top. There’s also no sponsorship commitment or endorsement deals that are forcing these guys to play this week. Anyone over in Tokyo playing the Olympics is there to win. That’s motivation enough.

It’s no surprise that in 2016 the three players to earn medals all were Top 5 in pre-tournament odds. Gold Medal winner Justin Rose went off at 12/1. Silver medalist Henrik Stenson was 4.5/1. Bronze medalist was Matt Kuchar was 15/1. Outright bets should probably be limited to a select pool of elite players with significant win equity. For those interested in sleepers, betting a prop such as “Will Win a Medal” at lower odds might be a smarter bet.