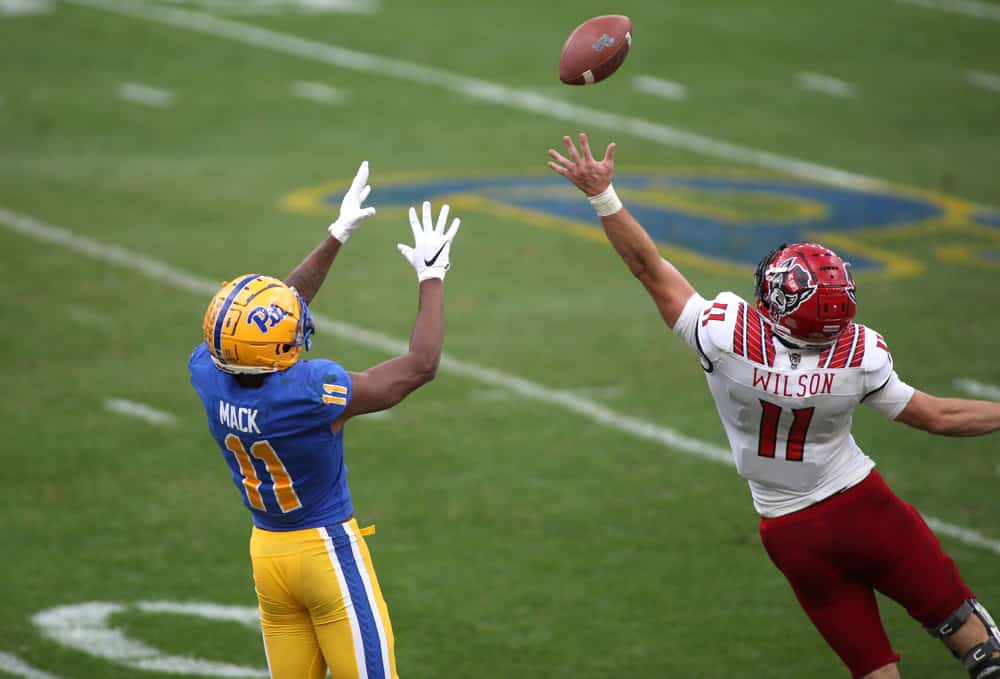 Looking at this Week 4 college football slate, it just feels like football. Real. Smash mouth. Football. We have been blessed by the football gods to have received two top 25 matchups that on paper feature defense, defense, and more defense. If the games live up to expectations, I’m sure there will be some bumps and bruises after this week. But for now, let’s get you up to date on the biggest injuries coming into the week with our College Football Injury Report.

Expectations and rankings have been high in College Station this season after just finishing outside of the College Football Playoff last year. The dream of a national championship seemed to have hit a speed bump when the starting QB went down with a leg injury in Week 2. QB Haynes King fractured his leg during a tackle from a Colorado defender and was given the timeline to return of “about mid-October”. King is definitely out this week and barring a miraculous recovery will most likely be out when the team plays Alabama in two weeks.

Now the biggest question here is how much of a drop-off is this injury for the offense? Despite winning the offseason QB competition over sophomore Zach Calzada, King was not exactly impressive this year. He had 300 pass yards, two touchdowns, and three interceptions in one and a half games against inferior opponents. Stepping in after King’s injury, Calzada was able to lead TAMU to a late victory over Colorado. He has also put up more yards, touchdowns, and fewer interceptions than King in his split time. These stats can be misleading, however, as Calzada did most of this damage against a really bad New Mexico team.

With questions at the QB position, it was already going to be challenging to gain yards through the air. Insert an Arkansas defense that is only allowing an average of 142 pass yards over three games, the odds are not looking good for the former backup QB.

Arkansas has been a bit of a surprise team this year that is getting ready to begin an absolutely brutal stretch of difficult games. In a tune-up game against Georgia Southern, their offensive line picked up some troubling injuries. Both their starting RT Dalton Wagner and Ricky Stromberg are questionable this week after leaving last Saturday’s game. Wagner has a back injury that had him walking gingerly on the sidelines, while Stromberg was rolled up on and suffered a knee injury. Neither player was able to practice early on in the week and head coach Sam Pittman has spoken to preparing to be without either player, while not directly ruling wither player in or out.

At the very least, if either player can play, they will be limited and playing at less than 100%. Texas A&M is not the team you want to be shuffling around your offensive line with or sending out guys who aren’t fully ready. This game features two stout defenses both giving up under 270 total yards. Arkansas is averaging 282 rush yards compared to Texas A&M’s 185 rush yards. In translation, this game is going to be decided in the trenches, and Arkansas potentially missing two of their starting offensive lineman puts them at a disadvantage.

It looks like rest was just what the doctor ordered for a Wisconsin team that played their last game on 9/11/21. Wisconsin’s defense is no doubt the strong suit of their team, giving up less than 200 yards again and 11.5 points per game this year. It appears this already strong defense will be receiving a boost. LB Leo Chenal missed the first two games of the season due to COVID-19 protocol, but has been inserted back into the first-team unit and will be available for this game. Chenal is a junior who has seen significant playing time in his first two years at Wisconsin. He recorded 40 tackles, three sacks, one forced fumble, and an interception last year.

In addition, the Badgers could be receiving two senior starters back in their secondary, in Hill and Wilder. Both players have a questionable designation after missing last week’s game, but are listed as starters on the game depth chart. Wisconsin releases a projected depth chart for each upcoming game at the beginning of the week, and it is an encouraging sign for both players to be projected in the starting lineup Saturday. The pair of senior starters will look to provide an experience lift to a team that will be playing in their second game of the year under the national spotlight.

Notre Dame and offensive line struggles are just not things we are used to hearing together over the last several years. The Fighting Irish were already having some unprecedented inexperience to start the year. In Week 1 against FSU, LT Blake Fisher became the first freshman offensive lineman to start a season opener for Notre Dame in 15 years. Unfortunately for Fisher, he was not able to make it out of even the first half of that game due to suffering a meniscus tear. The freshmen LT has already had knee surgery and is going to be out for about eight weeks while recovering from this injury. This offensive line has not lived up to usual expectations so far this year, with the offense only averaging 106 rush yards a game. Throwing in that Wisconsin is only allowing 33 yards per game on the ground, it seems if the Irish want to win it will come down to the arm of their QB Jack Coan.

Clemson’s offense has been nothing short of atrocious this year. 17 total points against two FBS opponents so far. 14 points against a Georgia Tech team who gave up 22 points in a loss to Northern Illinois to start the year. The good news for Clemson is they are going to be going up against an NC State defense that is not at full strength. Two starting defensive players suffered season ending injuries in Week 2 against Mississippi State. The first injury was to a major leader on this Wolfpack defense, All-ACC linebacker Payton Wilson. Wilson had an ACC leading 10.8 tackles per game last year and brought enormous energy to the middle of that defense. He also added two interceptions and three and a half sacks to his campaign last year. Cyrus Fagan is a new starter to this defense who transferred from Florida State in the offseason. Fagan already had an interception this year and looked to bring some experience to the Wolfpack secondary as a fifth-year senior.