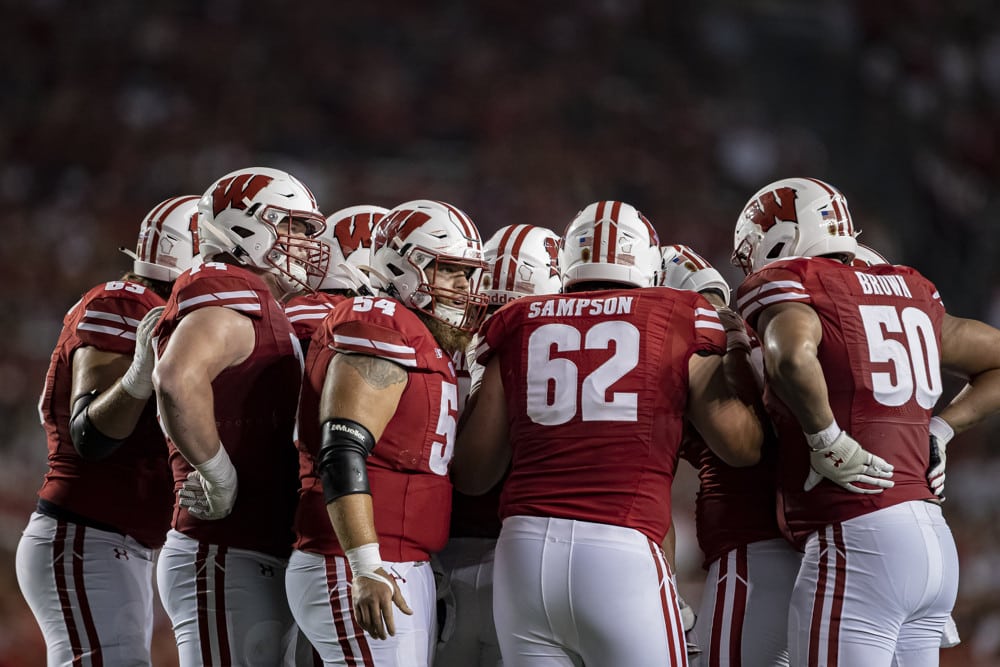 Another week of college football is in the books. This past Saturday solidified that 2021 is going to be a wild ride. #1 Alabama hung on to beat Florida while other top ten schools like Clemson, Oklahoma, and Ohio State looked very shaky in close wins vs inferior opponents. From a gambling perspective, the weekly picks I give out on this column went 3-2. While I’m not satisfied with that, at least we were in the green.

Moving on to Week 4, there’s a lack of big-time matchups at the top of college football this Saturday. With just two games between ranked schools, we had to dive a bit deeper this week. Let’s jump in!

This is one of the biggest college football games this week.

After losing their season opener to Penn State, Wisconsin easily cruised past Eastern Michigan before getting a bye week to prepare for this huge matchup at Soldier Field. Meanwhile, the Fighting Irish enter the contest with an undefeated record of 3-0. Somewhat surprisingly, these programs haven’t faced off since 1964.

Notre Dame might be undefeated but they haven’t looked great in the process. The now 0-3 Florida State Seminoles took the Irish into O.T. The following week, it was a comeback drive in the final minutes to save the day and knock off Toledo. Finally, last week Notre Dame was only up by 3 on Purdue going into the 4th quarter before Brian Kelly’s crew pulled away to win by two TDs.

On one hand, you have to give Notre Dame credit for winning close games. They lost a ton of talent to graduation so we knew this wasn’t going to be a dominant team right out of the gates. On the other hand, the 3-0 record is deceiving and they might be ripe to drop a game. QB Jack Coan, the Wisconsin transfer, has played some of the best football in his collegiate career, but the run game has stalled out and the Irish still don’t have weapons on the outside.

I love the fact that Wisconsin has a bye week entering this game and that they should still be pissed off at losing to Penn State. They aren’t opening the season going 1-2. However, the line that opened around -5 has crept up to -6.5. As long as it stays under 7, I’m on the Badgers. They have an excellent defense that will give a struggling ND offense fits.

My Pick: Wisconsin and the Under

First things first, I reside in Raleigh and I’ll be rooting for the Wolfpack so take everything I say from here on with a grain of salt. With that said, if anyone in the ACC Atlantic has a chance of knocking Clemson off of its perch, it’s gotta be this year.

In two FBS games this season, Clemson has only scored two touchdowns. They dropped the opener to Georgia 14-3 and then just barely squeaked by Ga Tech 14-8 last weekend. The latter is the most concerning – only 284 yards of total offense against the Yellow Jackets is troublesome. This is the same GT team that lost at home to Northern Illinois to begin the season. And yes, the Huskies put up more points and yardage than Clemson was able to.

When I look at Dabo’s squad, I don’t see the playmakers. There’s no DeAndre Hopkins, Mike Williams, Tee Higgins, or Travis Etienne. I’m not even sure I can find a Hunter Renfrow. Additionally, through three games DJ Uaigalelei has an under 60% completion percentage and has thrown 1 TD and 2 INTs.

Now when looking at NC State, the Pack have put beat downs on lesser opponents in USF and Furman but dropped an ugly road game to Mississippi State, 24-10. Dave Doeren’s guys couldn’t get the ground game going (25 carries for 30 yards) and lost the turnover battle 0-3. That’s not gonna cut it playing an SEC team on the road. It’s also not going to cut it against the Clemson D which is still playing at an elite level.

To make matters worse, in the same game, NC St lost all ACC linebacker Payton Wilson and a starting DB to season-ending injuries. While this will hurt the defense, I’m not sure a lackluster Clemson offense can take advantage of it. You know I’m riding with the home dog here but be careful betting against Clemson. This year’s squad may not look like a playoff-caliber team, but they still have 5 stars up and down the depth chart.

My Pick: NC State and the Under

Talk about teams with struggling offenses – how about Texas A&M? To their credit, they are 3-0 but wins vs Kent State and New Mexico don’t really count, right? In the one game against a Power 5 opponent in Colorado, the Aggies only won 10-7.

Haynes King started the year at QB but a fractured leg has the freshman out indefinitely. In his absence, Zach Calzada only passed for 183 yards on 18 of 38 passing vs the Buffs. He looked sharper vs New Mexico but they don’t quite have the same D as the Razorbacks. As well as KJ Jefferson is playing for Arkansas its clear which team has the advantage at QB.

Arkansas is also 3-0 with lopsided wins vs Rice and Ga Southern and an impressive victory over Texas, 40-21. Holding the Longhorns and Steve Sarkisian to only 256 total yards was downright impressive. It will be interesting to see how effective the A&M offense can be against this same stingy defense.

If you look at the polls (and you shouldn’t) A&M is ranked #7 and Arkansas is ranked #16. I don’t know how that is possible when looking at the resumes of both teams. However, I’m sure Arkansas is aware of the slight and will use it to their advantage.

I just don’t see why A&M is favored by more than a field goal. We’re starting to see the line creep down a bit so get in before it drops further. Gimme the Razorbacks to cover and a money line victory is in play.

My Pick: Arkansas and the Under

I’m not sure how good of a game this will be but it was a struggle to list the five biggest matchups for this week. This is a rivalry game and even with how dynamite the Gator offense was in 2020, they still only beat the Vols 31-19 last year. Perhaps this contest will be close and give us a reason to watch.

After starting in a 21-3 hole vs Alabama, Florida played a much better second half but couldn’t quite get over the hump, losing 31-29. The QB play is a question mark but to everyone’s surprise, the Gators ran for 245 yards and 4 TDs on the Crimson Tide. One has to wonder if that second half was the confidence boost a young team needed to propel them to new heights.

Tennessee may be 2-1 but their only game of significance was a 41-34 loss to Pitt in Knoxville. In that game, the Vols lost the turnover battle 0-3 and were flagged for 13 penalties for 134 yards. If those two aspects were cleaned up just a little bit, we’d have a 3-0 program entering this game.

I may not trust the Florida QB play but it’s better than what Joe Milton and Hendon Hooker have to offer for Josh Heupel. Either way, I’m not sold on Florida being dominant. I think Tennessee can hang around a little while and maybe back door this thing. I’m on another dog to cover.

My Pick: Tennessee and the Over

At some point, I’m trusting Lincoln Riley and Spencer Rattler to get this Sooner offense in gear. Oklahoma could only manage 3 second-half points vs Tulane and were only in the low 20’s vs Nebraska. At this point, you’d have to think WVU is a better team than the Green Wave or the Cornhuskers, so it’s worrisome to lay this many points.

Going into the season, Oklahoma was a legitimate national title contender because the D was supposed to be improved. That combined with and an offense that can hang 50 on anyone would be difficult to beat. So far, neither has been true. Tulane had way too much offensive success vs the Sooners and we’ve already mentioned their issues on offense.  Let’s just say they need to get more plays like this:

Meanwhile, I’m not exactly sure what to make of West Virginia. They dropped a close game to Maryland and hung on to beat Virginia Tech at home. My hunch is that they are a middle-of-the-pack Big 12 squad that will probably end up around 7-5. Pretty much what they’ve been since joining the conference.

We do know that WVU doesn’t have a very good track record at Norman. The last three contests have all been blowouts of 20 points or more including the 52-14 game in 2019. I’m going to give Oklahoma one more chance to impress me before I write them off this season.

My Pick: Oklahoma and the Over