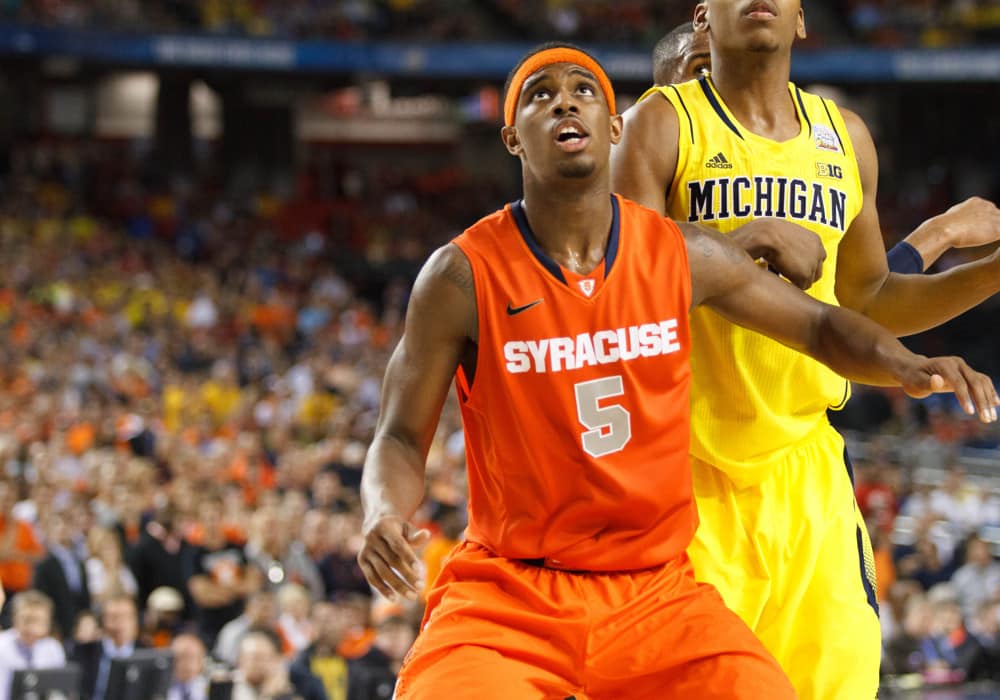 It’s The Basketball Tournament (TBT) Saturday and there is a full slate of games to keep you thoroughly entertained. Saturday’s action is headlined by popular teams like House of ‘Paign and Boeheim’s Army. Let’s look at the TBT picks for Saturday, July 24th, and some teams to watch.

Boeheim’s Army was the talk of the offseason after adding Overseas Elite players D.J. Kennedy and DeAndre Kane. This adds them to a roster with Syracuse legends Tyler Lydon and Chris McCullough, and former Boston College alum Tyrese Rice. This feels like this is the year that the Syracuse alumni team can finally reach the TBT mountaintop.

On the other hand, you have first-year TBT entrant Forces of Seoul. Comprised players that played South Korean ball, they have a lot of size and a number of guys with NBA and G-League experience. Vernon Macklin was the 52nd overall pick in the NBA draft by the Detroit Pistons. They also have former Arizona State guard Torian Graham who averaged 18 points with the Sun Devils.

This Forces of Seoul team has a lot of playmakers and could actually make this a sneaky good game. I still expect Boeheim’s Army to make a late run and pull away to get a nice cover.

This should be an authentic game between two ACC rival alumni teams. Both are first-year entrants into the tournament and whichever team can gel the quickest is going to have the edge in this one.

Category 5 has a former NBA player of their own in Davon Reed. Also led by TBT vet Rion Brown, the Miami alumni team has the pieces to be able to compete against Wolf Blood. I do not expect either team to give up much, however, I am still giving a slight edge to Wolf Blood.

House of ‘Paign made an electric entrance into the TBT last year after knocking off the previous year’s champion in Carmen’s Crew. Mike Daum absolutely looked the part as one of the best players in the whole tournament. There is not any reason that we should not expect a lot of the same.

However, in the first round, they are getting the Jackson TN Underdawgs who are not going to be an easy out. This is a veteran TBT team who made a quarterfinal run in 2019. They have a number of key playmakers in the backcourt that all have the experience of playing in this tournament. While I do not think they have anybody that will be able to contain Mike Daum, I do think that they can have enough scorers that they can keep up with House of ‘Paign’s offense. Jackson TN could provide one of the bigger surprise covers and stands out among the TBT picks for July 24.

Red Scare is definitely a strong team that has the potential to make another deep run into the tournament. This team is a mix of the 2013 Elite Eight Dayton team and the 2020 team that so many people were extremely high on pre-COVID. Veterans Darrell Davis and Devin Oliver are looking to usher this group into an opportunity to play in front of their home crowd in the TBT Championship rounds.

However, they have a tall task ahead of them in an upstart team filled will players from BC Vahakni City’s championship roster this past year. Darious Clark leads this new team into the tournament looking to continue the momentum from their play in the Armenian A-League.

I do not doubt that Red Scare can win this game, but 8.5 is a hard number to lay with the history that the players of this BC Vahakni City team. They have four members of that championship roster playing in the TBT and I expect them to keep it tight with Red Scare and give us a sneaky good game.

The Overlooked come in as a highly touted first-year entrant into the tournament. The Murray State alumni team is led by former NBA player Isaiah Canaan, who has the ability to pull up from anywhere on the court. They also have a former conference defensive player of the year in Shaq Buchanan that will be able to wreak havoc on the other side of the ball.

Team Heartfire returns to the tournament after an unsuccessful first experience in the TBT bubble. They have former NBA Draft pick Branden Dawson who looks to lead the charge after his former Michigan State teammate Brandon Wood had to step away after signing a professional contract. This team has a lot of size with three players that stand over 6’10 in height.

This should be a very gritty game as both teams have a defensive edge to them. I will take the points with Team Heartfire, but I will not be surprised if this game comes down to the last possession in the Elam Ending.

This matchup will pit another pair of first-year entrants against each other. Blue Collar U is a Buffalo alumni team that was able to put together a couple of NCAA tournament runs. And the Nerd Team is comprised of players from high academic institutions that can also hoop.

The Nerd Team has a European standout in John DiBartolomeo that I fully expect to make a name for himself in this tournament. However, my concern for this new team is that they are just pieced together and have not yet built the chemistry that Blue Collar U should have. The Buffalo alumni team shares members from three years of MAC tournament championships. I give the edge to Blue Collar U to keep it larger than a possession. The UB alumni should pick up a big TBT win here and cover a narrow spread as far as picks go for July 24.

Not only is this a game between two TBT veteran teams, but they also both have ties to the region. This should be an electric matchup with neither side wanting to give in front of the “home” crowd.

Chicago Hoopville Warriors have always been a tough, gritty team in the TBT that has not been easy to put down all the time. They were a late entry into this year’s field with the withdrawal of Tubby Time, but they still should have the same chip on their shoulders.

This will be Always a Brave first TBT in two years. Former NBA lottery pick Patrick O’Bryant will be a dominating force inside that the Hoopville Warriors do not have anybody that will be able to challenge him. O’Bryant also has the ability to step outside and shoot which should give this Chicago team problems. Always a Brave has a strong pedigree in the tournament and should be able to pull this out by two possessions.

The last game of the day should be a good one between another pair of alumni squads. Zip ‘Em Up, the Xavier alumni team has a former NBA player in Trevon Bluiett. Blueitt is a sharpshooter from three and is a career 2,000-point scoring for Xavier. Joining him in the backcourt is another sharpshooter in J.P. Macura who also spent time in the NBA.

Ohio 1804 will hope to have some of the Columbus crowd on their side as they make their first entrance into the TBT. They bring back Stevie Taylor who was a part of the Bobcats 2012 Sweet 16 NCAA tournament run. They also recruited Jordan Barham who was a double-digit scorer for the Davidson Wildcats. And they will need all of it to keep up with this Xavier team.

Ultimately, I feel Zip ‘Em Up’s scoring will be too much for Ohio 1804 to handle. Zip ‘Em Up should close out the July 24 slate by covering one of the larger TBT spreads among all these picks.