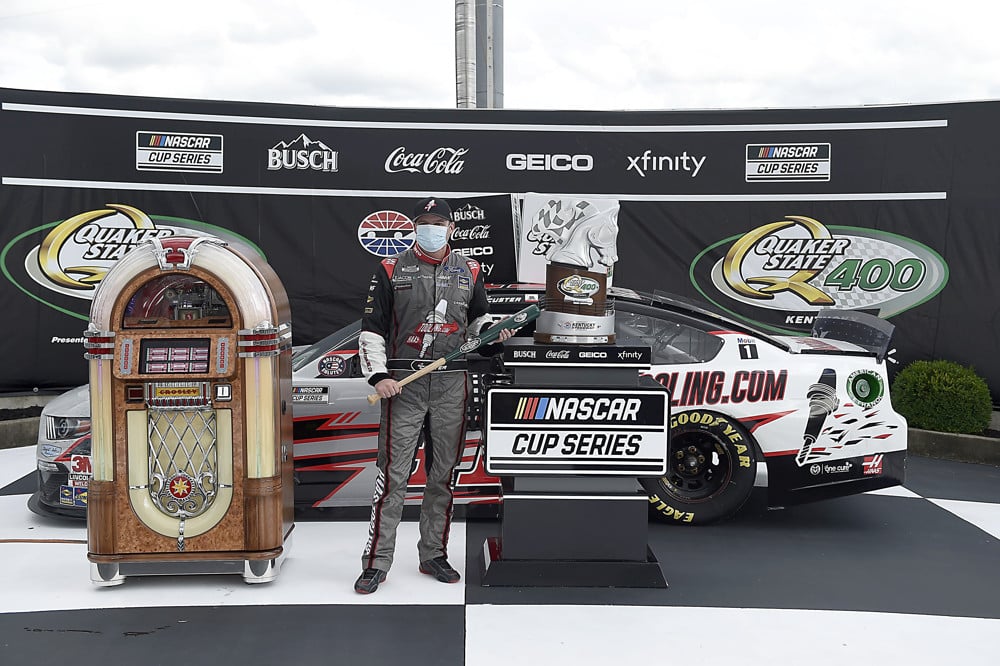 Drivers return to the Atlanta Motor Speedway this weekend for the second time this season to run the Quaker State 400 Presented by Walmart. It will mark the first time the track has hosted this race as its history has been rooted at the Kentucky Speedway. Early this season, Ryan Blaney chased down Kyle Larson for the win here. They will be two of the 37 cars to ride around the 1.54-mile quad-oval for the 260 laps necessary to complete this race in regulation. The action will be hot and heavy on Sunday as drivers will run this track for the last time in its current configuration. Next year, the track will go NextGen along with NASCAR with a full track redesign.

Back in March, Kyle Larson put on a clinic at the Atlanta Motor Speedway. For 269 out of the 325 laps in the Folds Of Honor QuikTrip 500, he led the field. Unfortunately, he could not hold off a late charge by Ryan Blaney with eight laps to go to close out the win. Over the course of that race, Larson turned 104 of the fastest laps on the track. If ever there was a dominating performance, this was it. Only a checkered flag would have made it better. He’s been solid in Atlanta even before his switch to Hendrick Motorsports. Four of his seven starts have been Top 10 finishes. Two of those were Top 5 outings, including this season’s runner-up performance.

For the first time since 2010, we've got two races this season at @AMSUpdates!

Last time there, Ryan @Blaney got by Kyle Larson late to score the victory. #NASCAR pic.twitter.com/oxZBCQdyeP

This week, Larson will start from the sixth position much as he did back in March. It took him 31 laps to find his way to the front of the pack. From there he set sail and hardly looked back. He’s been the most dominant driver in the sport this season. His recent setbacks in Pocono and last week at Road America aside, he’s the car to beat on any track at any point. This is especially true this week. He’s expensive and you’ll need to get creative if you roster him. That said, if you fade him completely and he has another dominant day, your chance of cashing this Quaker State 400 slate fades as well.

Looking back at the track history here, Kevin Harvick has played hot potato with the checkered flag over the last five races. He won the 2018 and the 2020 runnings of the Folds Of Honor races. What’s more, is that 14 of his last 17 races in Atlanta have produced Top 10 finishes. Harvick just did not have it together earlier this season and could not hang with the lead cars. While he still managed a Top 10 outing, it was a three-spot drop from his seventh-place start. One thing worth noting is since 2010, Harvick has turned four starts outside of the 21st position into a Top 5 finish. Two of those resulted in a Top 5 day.

It’s been a rough go for the #4 team this season. Happy Harvick has not been his normal self on tracks he’s used to owning in the past. He’s without a win this deep in the season after having four victories at this point last season. That said he does have 14 Top 10 finishes this season so it hasn’t been all bad. His bad day last week in Wisconsin has given us a small gift with him starting deep in the field. If ever there are differential points to be had, here are some free ones. Look for him to finish well in your Quaker State 400 Presented by Walmart DraftKings lineups.

The person on the other end of Harvick’s game of hot potato is Brad Keselowski. The #2 car won both the 2017 and the 2019 offerings at the Atlanta Motor Speedway. Those wins came in the midst of a six-race stretch of Top 10 finishes here. Earlier this season in Atlanta, he rolled off the grid from the fourth spot. Sadly that day did not end in his seventh straight finish among the best ten cars. He crossed the finish line with a disappointing 28th place effort. That said, the track record is still there. He’s still one to watch in Atlanta despite the outlier.

A victory lap with Old Glory to cap off the day! Brad Keselowski wins in Atlanta! 🇺🇸🏁#FueledBySunoco pic.twitter.com/fOfcnUIrye

Should Keselowski take home a Top 5 finish this week, or even win the race outright, you will get a solid amount of differential points. You’ll be even happier if he manages to lead a few laps along the way. His season has had about as many turns as the Road America course he ran last week. His win at Talladega was by far the highlight, but it was hit and miss before and after. The MoneyLion Ford Mustang will look to return to the Top 10 after two such finishes in the Poconos. However, Team Penske would rather see their car in victory lane again which is well within their driver’s reach.

In his career, Tyler Reddick has made two career starts at the Atlanta Motor Speedway. Last season, he crossed the finish line in 16th position. In March, he finished 10 spots worse with a 26th place showing. There is not much to go on by way of track history for Reddick. Even his Xfinity Series career here has been a mixed back. In his two starts there, he’s finished 19th and 5th.

Sent it a little hard there, @TylerReddick. pic.twitter.com/MZ0rg8olJ0

That said, there needs to be a place to save some salary in this top-heavy slate. Riding a slight push of momentum from the #8 car could provide just that. Reddick finished just outside the Top 10 in the Saturday race at Pocono. He’d follow that up with a 9th place effort on Sunday. Last week at Road America, he withstood some of the roughest driving of the season to complete the race in 8th place. The Okuma Ford Mustang is starting towards the front this week. Given his price point, should he stay there, it will make for a decent return on investment. Of course, your Quaker State 400 Presented by Walmart NASCAR DraftKings roster will fare better if he improves his position. Even if he doesn’t, there is value here.

If one were evaluating Ryan Newman’s history on this track, it would not pass the eyeball test. In his 29 career starts here, he’s only finished inside the Top 10 nine times. His highest finish so far has been 5th place, which he’s done only twice. The good news here though is that much of that came in his days before his move to Roush Racing. Since jumping in the #6 Mustang, Newman has had two 13th place finishes along with a 14th place in three races. This includes the 13th place outing in March. In that race, he began in the 28th position.

There has not been much to be happy about this season for the Oscar Mayer team. Newman has only notched three Top 10 finishes so far. Not to mention he’s had far too many days crossing the line outside of the Top 30 than he’s willing to admit. With that in mind, you are not looking for a stellar finish or even a win for Newman to hit value here. All you really need is another race like he had in March. Another 13th place finish will net you a floor of 16 differential points. That plus his 30 points for finishing in that position will make for a good day. Your Quaker State 400 Presented by Walmart lineups needs a $6k driver with potential, Newman is that driver.