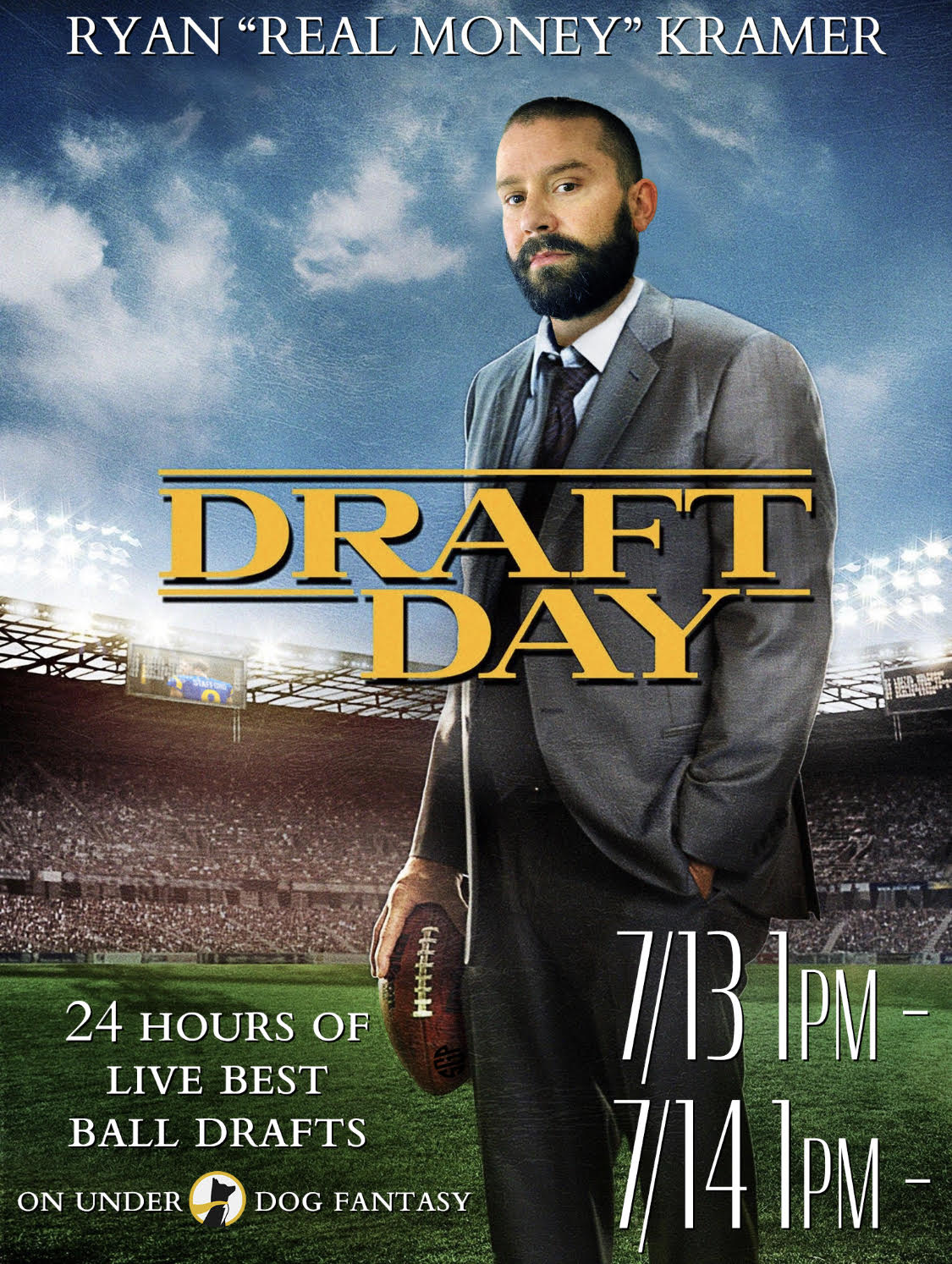 On July 13th, Ryan “Real Money” Kramer attempts to do the impossible by completing 24 HOURS of straight Underdog Fantasy Best Ball drafts. The Sports Gambling Podcast Network is offering a $500 prize to the winner of the Underdog Best Ball Draft Day Props located on the SGPN app. And I have the best angles that will heighten your chances of walking away $500 richer.

For this prop, I did some digging. I reviewed the tapes of the Sports Gambling Podcast and I was able to actually collect data on 12 Best Ball Drafts. Here is the time of each of those drafts from the time it started to the time that Kramer finished reviewing his team:

A great sample size because it fully represents Kramer’s enthusiasm at 1 PM PT when he starts the draft and his miserable sorrows during the graveyard shift. The average of all those drafts is just under 63 minutes per draft which would put him on pace to complete 22 full teams. Kramer will be well-rested from his travels off the grid and keep us under that 63-minute average per draft. I like the over 20.5 teams.

Now we have the Healthy Beverage Choice with 0 Calories, 0 Sweetener, and 0 Sodium. Assuming this is a Kramer special this will most definitely be his drink of choice for a majority of this draft and 12.5 feels like a low number. However, I am not so enthusiastic about the over.

When you are making history with 24 HOURS of Underdog Fantasy Best Ball Drafts, you will need to consume a fair amount of alcohol. I like the chances of Kramer substituting a few La Croix drinks for something that will put some hair on your chest, or even an energy drink or two. Pencil me down for the under 12.5.

Back to the tapes. I reviewed the gang’s 4 hours of Live NFL Draft Coverage and came back with an interesting takeaway.

Kramer took his first bathroom break one hour 21 minutes into the live stream. And then nearly the same time later, Kramer once again raised out of his seat two hours and 35 minutes into the stream.

I expect this to regress as surely Kramer’s baby bladder can hold it longer than 90 minutes without having to use the restroom again. However, with the combination of La Croix and alcohol, I expect him to consume during these 24 hours, I am all over the over 9.5 bathroom trips. Once you break the seal…it’s over!

As someone who has drafted in Underdog, I know how easy it is to get distracted and accidentally end up auto drafting a few picks. But this is Ryan “REAL MONEY” Kramer we are talking about here!!

Every draft, Kramer has a better and better chance at winning ONE MILLION DOLLARS. “Real Money” Kramer is going to keep that in mind with every draft and try to draft a million-dollar lineup every time. Even on the verge of death at three in the morning, I expect him to make as many selections as possible. Under 12.5 auto-drafted picks.

This is purely just a gut call. But watching the podcast and the relationship between Sean and Kramer. If Kramer falls asleep during the 24 hours, then Sean will NEVER let him live it down. And I believe Kramer knows this to be fact. Despite cranking out 24 straight hours of Underdog best ball drafts, count on “Real Money.”

He will do everything humanly possible to not give Sean the ammo after he is caught falling asleep. Kramer is coming into this rested and he will absolutely hate life at one point. I still trust him to hold out the full 24 hours. Give me the under. ALL RISE!!!!!