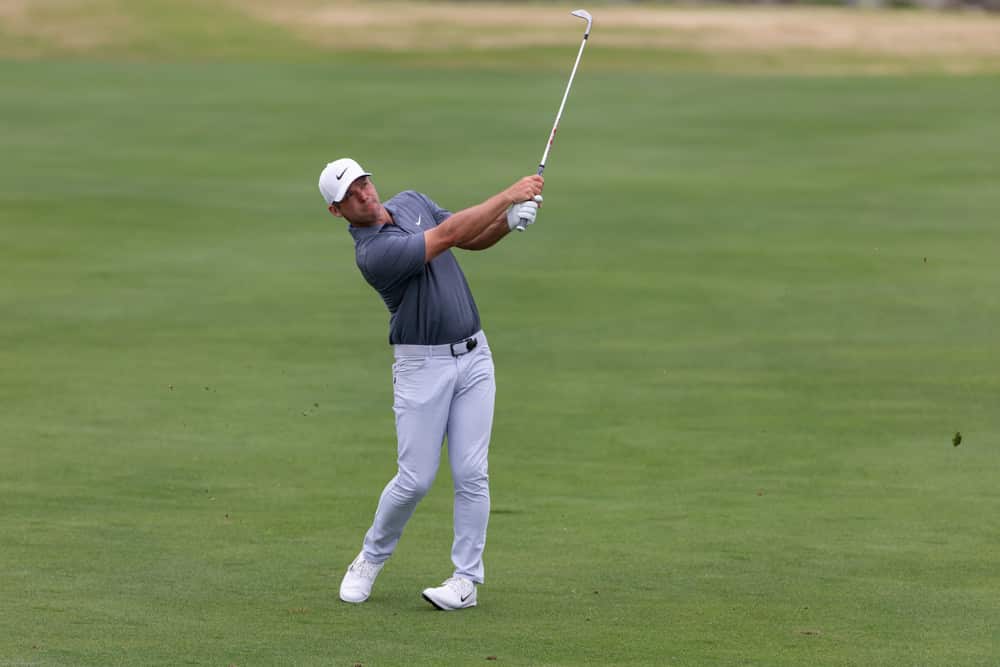 The course is a par 70, playing more than 6800 yards. Players will see bentgrass tee to green with bluegrass fescue rough. At least one of the Par 5’s will be reachable in two by nearly all players. The 296-yard par 4 15th presents a decision for the players, go for it and risk ending in the 4-acre lake, or lay back off the tee and concede for a birdie attempt. The rest of the par 4’s are around 400-450 yards. Many holes incorporating many doglegs forcing the pros to play from the correct side of the fairway in order to have a shot at the pin. The fairways are lined by large oaks, sycamores, and pines; playing from the fairways is a must.

The course record of 58 was set in 2016 by Jim Furyk, surpassing Patrick Cantlay’s 61 as an amateur in 2011. Previous winners are Dustin Johnson (20′), Chez Reavie (19′), Bubba Watson (18′), and Jordan Spieth (17′). DJ finished at -19 last year, so we expect this to be a birdie fest and approach that number again. We are going to put an emphasis on course history as well as recent history on other Pete Dye courses (Harbour Town, Kiawah Island, TPC Sawgrass, San Antonio, and Louisiana). Our key stats for the event are strokes gained approach, strokes gained Par 4 400-450, driving distance, opportunities gained, and strokes gained putting bentgrass.

Paul Casey followed up his 4th place finish at the PGA by battling all weekend to a 7th place finish at the US Open last week. He gained more than 10 strokes tee to green last weekend, doing it mainly with his irons and wedges, that form should carry over nicely to River Highlands. He’s had two excellent events on Pete Dye designs with the 4th at Kiawah Island, and the 5th at Sawgrass in March. He ranks out 11th in our model thanks to his strokes gained off the tee and on approach shots. This will be his 7th appearance at the Travelers, he has never missed a cut and has 4 top-five finishes. Casey is a must-play for in your DraftKings lineup during the Travelers Championship.

Abe Ancer is a lock for us this week. Although he played poorly last week, he mainly struggled around the greens and putting. But with that said he was shooting darts on the course, gaining more than 5 strokes on approach. With as hot as he was before the U.S Open, we think last week was just a fluke. Except Ancer to get back on track with another top 10 finish here at the Travelers. He has placed 11th in two consecutive years, no reason to believe he can not this year.

Harry English is finally finding his 2020 form. He just finished 3rd at the U.S Open gaining more than 12 strokes on the field. You know Harry English is gaining confidence on the course because he back to gaining strokes putting. Last week he gained 4 strokes on the field. Before his impressive third-place finish, Harry took 14th at the Palmetto. Although he has a bad history here at TPC River Highland, being a shorter course, we believe Harry is going to excel this weekend.

One of the world’s premier players came out to play at the U.S Open. Francesco Molinari had himself a nice weekend finishing in 13th place. He gained more than 9 strokes on the field and finally had himself a top ten finish since the Genesis. This is a gamble play this week because no data is pointing to Molinari, but after last weekend’s play, we believe Francesco is getting back into elite form. With a return to this elite form he is a must-have in your Travelers Championship DraftKings lineup.

At this price point, we feel Jason Day gives your lineups some serious win equity. The former #1 player in the world has been struggling with his game for some time. However, in his last event, he was able to find success off the tee and gave us glimpses of that incredible short game. That was at the PGA and earned him a 44th, on a Pete Dye course. Prior to that, his last made cut was at the Players where he finished 35th. Day’s game fits nicely with a Pete Dye course, and he can show us that this weekend. This is his 6th appearance at the Travelers, he’s had three previous top-20s including an 8th in 2019. This should be a fun event for him to continue to get his game on track.

We could virtually copy and paste everything we said about Day here about Rickie Fowler. he recently announced his family is expecting an addition, we know the trends of what fatherhood has done for the player’s game. He has a chance to make his comeback tour a step further this weekend. He comes in with great recent form finishing 11th at the Memorial and 8th at the PGA. In his last five rounds, he is gaining strokes in every category. He’s another former world #1, with a short game that excels on Dye tracks. He will be rusty at River Highlands, he hasn’t played the Travelers since 2013 when he was 13th. He’s likely added this event to his schedule as another stop for him to work on things in preparation for the end of the season and the FedEx Cup playoffs.