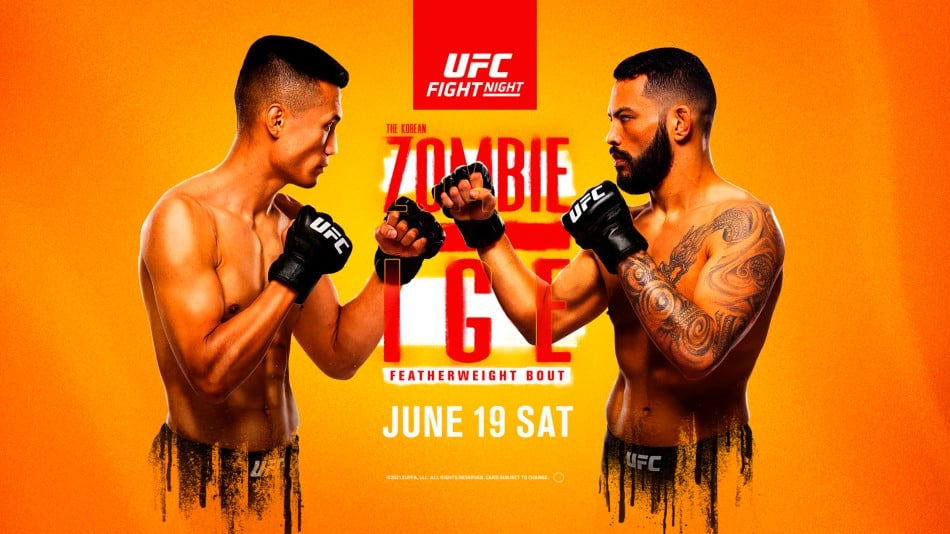 The UFC octagon returns to its home gym, the UFC Apex in Las Vegas, this Saturday for UFC on ESPN: The Korean Zombie vs Ige (aka UFC Vegas 29). After a 9-5 performance at last week’s UFC 263, including a number of underdogs, I’m feeling just about ready to get on a proper heater. So here are my winning UFC Vegas 29 predictions, always guaranteed to be 100% accurate.

Our featherweight main event on Saturday is a tough one to pick, hence the current pick ’em price on the board. I’m leaning towards Dan Ige due to his durability – he’s never been finished in a fight despite taking immense damage from heavy hitters. I’m also counting on The Korean Zombie to be diminished as a fighter like he appeared to be in his last octagon appearance.

Sergey Spivak is 18 years Aleksei Oleinik’s junior – that probably is all the breakdown you need for this fight. The soon-to-be 44-year-old Oleinik’s cardio isn’t what it once was, and while he remains a grappling beast, I expect Spivak to piece him up on the feet.

Davey Grant is my first underdog on what turned out to be a very dog-heavy fight card. Grant has the striking statistical advantage as well as landing more strikes on average than Marlon Vera. Plus he’s on a two-fight knockout streak. I’ll take the +175 payout, thank you very much.

Back-to-back dogs as I’m riding with ‘Juicy J’ Julian Erosa in his battle against Seung Woo Choi. Erosa has totally changed his style in this his third stint in the UFC, and his more reckless style has lead to back-to-back stoppage victories. He, like Grant, also has the striking and active striking stats in his favor in this matchup.

The UFC gets its second Bruno Silva added to its roster, this one a middleweight. After sitting out a lengthy USADA drug suspension, this Silva finally makes his UFC debut this Saturday after a very successful career overseas. Assuming he isn’t a totally different fighter off of the “special sauce”, I see him taking care of Wellington Turman.

With big brother Douglas losing his Bellator championship last weekend, the Lima family needs a bounce-back win this weekend. I predict that will happen, as Dhiego Lima is eight years younger than grizzled veteran Matt Brown and has the all-around game to beat him.

After losing for the first time in his pro career, Aleksa Camur gets a favorable matchup this weekend against Nicolae Negumereanu. Stipe Miocic’s teammate is the far better striker as well as the better grappler in this fight, so the win should be his.

Enough going chalk – time for another live dog. A battle of two premier grapplers in the women’s strawweight division should be a fun one, and I’m going with Kanako Murata. After winning her UFC debut, she’s now won eight straight fights and should use her judo and wrestling background to get a decision victory here.

This matchup has Fight of the Night written all over it. Matthew Semelsberger and Khaos Williams both like to trade leather, with both winning more than half of their fights via knockout. I like Semelsberger here since he’s got the superior striking and grappling stats, plus is on a five-fight winning streak.

A #chunkyguy battle here in which I’m going with the much bigger heavyweight in Josh Parisian. He’ll be half a foot taller, have seven inches of reach, and probably around 20 pounds on Roque Martinez on Saturday night. He’s also the more active striker of the two.

Let’s grab another dog in the even-money Rick Glenn. ‘The Gladiator’ will be the bigger man in this matchup, as well as the better striker, so he’s a decent underdog pick.

A bit of a risky pick, but ‘King’ Casey O’Neill is a perfect 6-0 for a reason. She’s bigger, younger, and has the superior grappling stats in this fight, so let’s roll the dice.